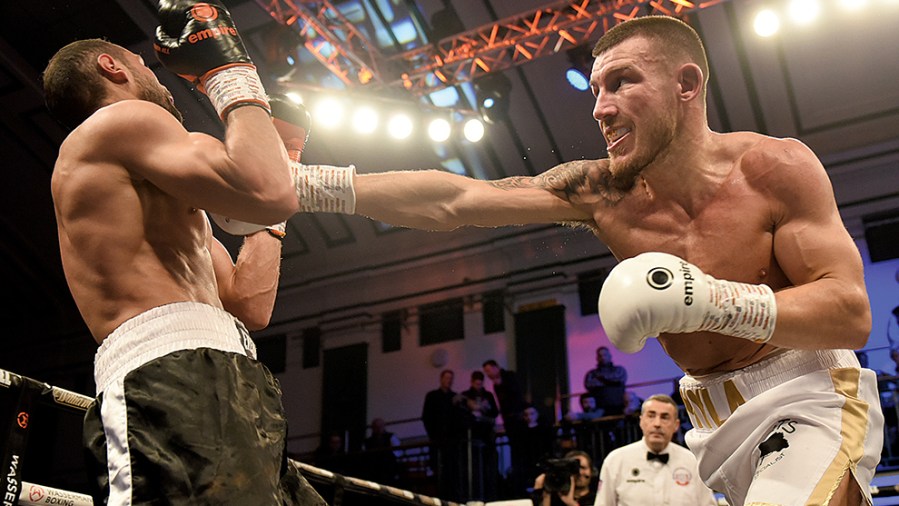 Steve Bunce reports on a weekend of extremes in British boxing

LUCY WILDHEART twisted her knee backstage at York Hall and Lerrone Richards fell in the shower on his way to Alexandra Palace during a long weekend of extraordinary and strange boxing.

A long weekend of fights started on Wednesday at a golf driving range on the Thames in the shadow of the O2. It was cold and bleak down by the river. The following day, in the splendour of a building on Portland Place, the mood was set and on Friday, a third consecutive press conference took place under a blanket of rumours. It was a busy few days.

The press conference highlight was Tommy Fletcher using a driver at the range. His first shot from the first deck hit the side about three feet from his body. His second just about trickled out and landed in a puddle about ten feet away, his third went about 60 metres and his fourth, when he had adjusted his feet, landed somewhere near Southend-on-Sea. It was remarkable watching him adjust his feet, hands and stance and bang that fourth ball. Mark Tibbs had told me that he is a thinking fighter and it showed on the golf range; three days later, he finished his opponent with a shot he had measured to perfection. He is a danger right now over six-threes and about 250 metres with a driver. Fletcher is impressive, but he might not have been the best cruiserweight prospect fighting over the weekend; Cheavon Clarke won on the same night.

It is harder to pick the boxing highlight. Liam Williams was clinical, John Ryder never put a foot wrong, Adam Aziz was brilliant, Jermaine Franklin was better than we expected, Hamzah Sheeraz did what nobody has done, a new Sandy Ryan used her head, Harlem Eubank proved he is not a novelty and Fabio Wardley made a bit of history.

Ryder stole the show; Nina Hughes in Dubai was a close second.

There was a time when a fighter like Dillian Whyte would have done 10 easy rounds as chief support to a Charlie Magri European title fight. In that fight, Whyte would have clobbered an American with very little ambition, but a new pair of shorts courtesy of Dennie Mancini at Lonsdale Sports. So many of the Eighties and Nineties heavyweight imports had new Lonsdale shorts and a trainer wearing cowboy boots and jeans. It was a tell-tale sign of their ambition – their lack of ambition.

One of those heavies was James Quick Tillis and he was a cowboy; his boots and jeans were real, and he was known as The Fighting Cowboy. He rode horses and fought giants, sharing the ring with Earnie Shavers, Mike Tyson, Greg Page, Mike Weaver, Pinklon Thomas and Tim Witherspoon. In London, he met Frank Bruno at Wembley and Gary Mason at the Elephant and Castle. He was from Tulsa, Oklahoma, and he had such a strong cowboy accent that it was often difficult to understand him. He also wore a cowboy hat.

Back then, there would have been no pressure on Whyte, no top-billing status and he would have shaken off a loss with an easy win. Times change, there is pressure and ridiculous scrutiny now and boxers are declared “finished” far too early. Whyte was edgy on Thursday at the conference. He knew what the prize was for beating Franklin and the American knew what the prize was for beating Whyte.

On the Saturday night, I was on BT duty at the O2, but I went to the fight hotel for breakfast on Sunday morning at Wembley. Packie Collins had a theory, and it is worth considering. He told me that Steve, his brother, had a defence of his WBO super-middleweight title in Dublin. Steve had been in America training, but on the East Coast. “Still, he had the jetlag,” Packie explained. “He said he felt slow and tired. And Dillian was on the West Coast and came in late. Perhaps, who knows, perhaps that was there in that performance – perhaps the jetlag was still in him.” Franklin had come in four weeks earlier. Whyte never offered any excuses. He never does.

At some time near midnight on Saturday, the boxers left their dressing rooms one final time and made their way home or to hotels. Ryder never had far to go, the Whyte team took the short walk across a street to a hotel, Parker was looking for ice. Parker’s break was clean, the pain clearly overwhelming; the post-fight pictures are gruesome.
Nathan Gorman and Parker had bad nights in defeat, and they can be long, long nights for fighters. Both endings were shocking to witness; Parker had not lost as a pro and Gorman only once. They each had a stunned look on their faces at the end. I’m not sure either of them had even contemplated losing; that can add to the post-fight recovery.

Zak Chelli was sickened when told Lerrone Richards was out, decked by a shower unit. That was a very good fight. It was just one of 50 stories spread across the three nights. Bradley Skeete was in the corner with Michael Hennessy on Sunday. Alan Smith and Eddie Lam had three wins in consecutive fights on Saturday. Chloe Watson was smart with Ricky Hatton in her corner on Friday. In Swindon on Saturday, Fonz Alexander lost for the 139th time. Fight people, fight stories.

Whyte and Ryder won the biggest fights, and both entered the ring with promises of riches ringing in their ears. So many others in the dozen or so venues up and down Britain ducked into the toilet to check the cash in their envelopes; they counted out the old notes, which can form a satisfying bundle in a bare hand. Some won, some lost during a weekend when over 250 men and women with a British Boxing Board of Control licence put a few quid in the Christmas pot.

It was a weekend of extremes, that is for sure.