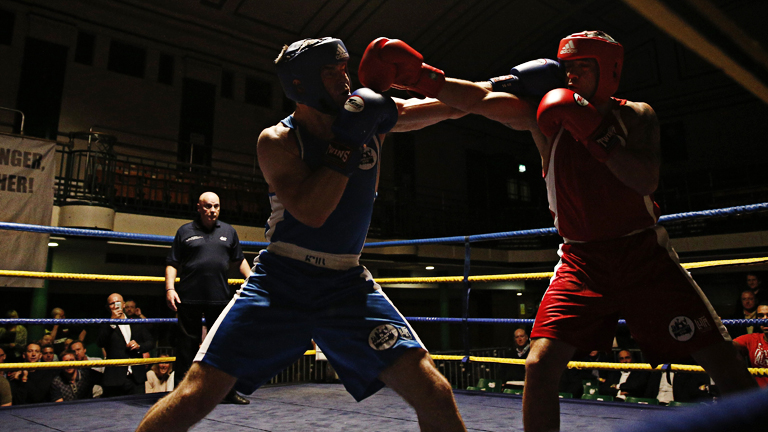 IN a lost corner of Hammersmith just metres from the swollen Thames, a colourful group of boxers gathered for a Sunday service to tell their stories, face their demons and some stood nervously shaking to celebrate their second chance.

Bridget was there to change her life, Michael was there because he had changed his life and Tess was there to ease the stress of saving people. They shared the road to their boxing redemption with a brutal honesty, often missing when professional boxers sit down, praise their management, predict destruction and tell you not to miss it. Nobody told me not to miss the show at Clapham Grand on Sunday March 15.

It makes sense that the increasingly loose boundaries of “white collar boxing” have moved and shifted and settled many times since the dizzy and obscene height in the nineties; back then genuine Masters of the Universe, banking and investing millionaires and billionaires, fought each other in London, New York and Shanghai. There was one show in London about 25 years ago – I think Alan Lacey promoted it – dubbed something vulgar and bold like Billions v Billions, where the tickets were 10-grand each. That was the peak of the real white-collar revolution. To be honest, I’m not quite sure what this new version is, but I like it.

They lose four stone, get respect, fight for belts and titles and in eliminators over three rounds with bigger gloves and head guards. They are matched with each other after a four-hour sparring session that takes place at the headquarters above a row of shops at Clapham Junction. I have been to that wonderful afternoon and it resembles a packed amateur boxing club, sweaty walls, dozens skipping, three-deep at the ring, wet body outlines on the mats, bags continually swinging and a hundred boxers all eager like children with their gum shields glasped between their teeth, waiting to be told to climb through the ropes. It is mad to witness.

However, they are not amateurs. They are men of 46, women of 38, boys of 19. They teach English as a foreign language, work as sommeliers in the finest Mayfair restaurants, they are plumbers, they do 12-hour shifts in casualty, they enforce the law at doors in pubs in Tooting that only the fearless go to. They are brave by the way, never think less of them because of their route to the ring. And, it seems to me, they are all trying to hold together something from a selection of their broken lives. It is white collar boxing for 2020 and the art is matching the men and women fairly – that is an amateur boxing trick.

The belts, the eliminators, the titles are a natural addition in a boxing world swamped with baubles of cheap gems and idiocy. They hold their belts like newborns.

Some of the younger boxers talk about taking “the boxing” forward, perhaps joining an amateur boxing club and even thinking about turning professional. That is the legitimate path, but many find the white-collar circuit late in life, possibly their 40s, most often it seems to me in their 30s and occasionally in their late 20s. Those are ages that make the transition from a keep-fit gym with a hanging bag, to the boxing ring and fighting three torrid rounds difficult.

On Sunday I sat with men that were shaking, struggling to find a way to control their fear on the day. I sat with one kid who looked about ten and was soon dubbed Harry Potter. Others were calm, this was not their first rodeo. “I just love to fight, I love it,” Big Michael told me. “You get nicked for doing this on the street.” He was talking from experience and he was not the only one.

And then there was Bridget. Bridget Irene Boyle, just 17 and at the conference with Peter McDonagh, the former fighter. “Watch this,” McDonagh told me and showed me a clip of Bridget swarming all over a much taller girl. “She can really fight.”  She is known as the Iron Lady, but she is still a girl. She has so far fought under cage, K-1, Muay Thai and wrestling rules. But, it is the boxing she loves. “When I was six and seven I would watch Jack Dempsey with my dad and that was it – I just wanted to be a boxer, a world champion and change my life forever. I can do it, I know I can do it. I begged him to take me to a boxing gym and he told me that I would regret it and that it would take over my life – it has, but I don’t regret it.” Bridget fights at the Grand with McDonagh taking care of her and she probably needs a wise, careful head like McDonagh to watch over her. McDonagh, by the way, is in talks with book and movie people to deliver his life story.

“When I walk to the ring I’m thinking of my kids and I’m thinking what it would be like to tell them that I lost – that motivates me,” said Michael.

“I took up boxing when I was pregnant with my second child,” said Tess, who works as a nurse. “I have a new four-week old baby and I’m doing this for him.”

“My eldest is 22 and she loves me boxing.” It went on like that.

There was also a lot of darkness, bad years on bad streets before they changed. The boxing arch was their route out. They will never get an invite to Sheffield with the GB squad, but that is not why they fight. They fight because it helps them survive and that is boxing’s greatest magic trick.