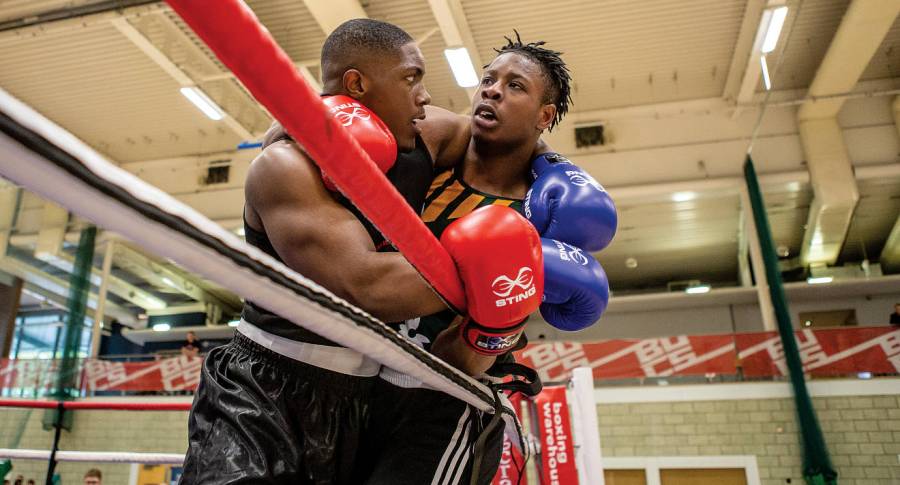 THIS is not a report from a weekend of boxing, sorry. I have no real idea who won 30 of the 33 finals on Sunday, no idea who won most of the semi-finals in the two rings on Saturday. I know I liked what I saw. The sports hall at the Walsall site of the University of Wolverhampton was host to the boxing championships of the British Universities & Colleges Sport (BUCS). The boxers were from 59 different places; Oxford and Cambridge, Loughborough, York, Leeds, Manchester. It had a very different feel to the Oxford v Cambridge match, which is a lot of fun, but always feels like it is taking place between the wars.

A couple of nights before the BUCS, there was a report that Anthony Johsua had been involved in a slanging match with students at Loughborough University. It is where he has set-up his new training base since finally leaving the GB system in Sheffield. He was living on site, not hidden away in a lavish country pile. Joshua has always lived the right life in the months and weeks before a fight.

Joshua is in the gym there, they study there, he has the gym and then the student boxers have the gym. He can be invisible in many ways. It’s all part of the new boxing awareness; students at Loughborough 10 and 15 years ago would not have been telling a former world champion that he needs to fight another world champion. In Walsall, the Loughborough boxers could all fight a bit.

“We see him,” confirmed Kabir Okunnu, boxing at light-middle in the under-seven fights category. He beat Manchester’s George Murray on a split on the Saturday and Murray had stopped a boxer from Oxford on the Friday. They were boxing two-minute rounds in the 0-7 bout category; others compete over three-minute rounds. It’s a real mix.

I watched about 12 bouts and it seemed just about all of them were close and competitive; it was three days and nights of quality novices in different categories. They could box and most really tried to box. The numbers were also impressive: 216 entries, up on 134 in 2010, but just down on the pre-Covid total of 234 in 2020. Two days later I was at Dale Youth, which is still called an amateur boxing club, and Mick Delaney told me that the numbers were coming back after the Covid blow. I thought the days of ABC being attached to a club were over – I’m glad they are not.
In bout 19, in ring B on Saturday night, I spotted a name I knew. Joshua Paladino from the University of Central Lancashire. Surely, there are not too many fighting Paladinos. I spoke to Rob and Sarah; they knew the details. It was the son of 90s heavyweight, Joey Paladino. They no longer make fighters like big Joey.

In a short 35-month period, Joey Paladino met Julius Francis, Kevin McBride, Scott Welch, Damien Caesar, Danny Williams, Garry Delaney and Pele Reid. They were mostly unbeaten and dangerous heavies. He would fight anybody. I mean anybody; only two of his 13 fights went the distance. He was 6ft 6ins and just over 17 stone. If you were an unbeaten young heavyweight, you knew that you had to get Joey out of there early.

On Saturday, Josh lost a tight one to Tomos Ivers from Liverpool’s John Moores in the 8-15 bouts category, class A and under 67-kilos. Josh is studying strength and conditioning. George Murray is studying mathematics at Manchester University. It takes all types. Brendan Ingle once had a neuro-surgeon at Unity, the amateur club that was part of his dream-shop on the hill outside Sheffield.

Will Lawson boxed Friday and Saturday to reach the final on Sunday in what was the last bout of the long weekend. He was in bout 16, ring B, for boxers with 16-plus bouts and under 71 kilos. His father, Paul, won the ABA heavyweight title in 1991 and 1993 and boxed at the 1992 Olympics in Barcelona; he lost to Danell Nicholson on points in the first round. Nicholson then beat Zeljko Mavrovic and lost in the quarters to Felix Savon. As a pro, Lawson lost a Commonwealth cruiserweight title to Chris Okoh one night at York Hall. Lawson boxed for Repton; it was very hot that night and it was November.

Will is studying at Salford, but representing the Solly, that’s the Salisbury in Liverpool in old money. Paul was with him and about as proud as I have ever seen any father ever. And that, by the way, is a coveted belt.

Paul had a boxing brother called Harry. Now, Harry is something of a legend in amateur boxing circles. Paul told a tale about Harry being refused a child’s fare on the train one night going to the Repton gym. “He was 13, but he looked like a grown man,” Paul said. Will was loving the story and had probably heard it many times. He was right, I remember Harry looking about 10 years older than he was.

On the train, the ticket inspector made a real nuisance of himself. There was a disagreement. So, the next day, Harry’s mum went with him and gave the ticket inspector the facts of life. This being the East End of London in the Seventies, they were probably not gentle facts. In short, she clumped him. “What happened after that?” I had to ask Paul. He smiled: “Well, Harry was 13 for about the next 10 years; nobody said a word to him on the train!”

So, on Sunday in Walsall there were 33 champions. Just three made my story, a random three at the start of the day. Kabir won, beating Lewis Worthington of Leeds Beckett. He will be back next year and so will George Murray. Tomos lost to Muhammad Ali Khizzar of Newcastle. I know Josh Paladino will be back next year. And, Will Lawson beat Leon Musson of Northumbria to put an even bigger smile on his dad’s face. As I said, this is not a report, sorry.