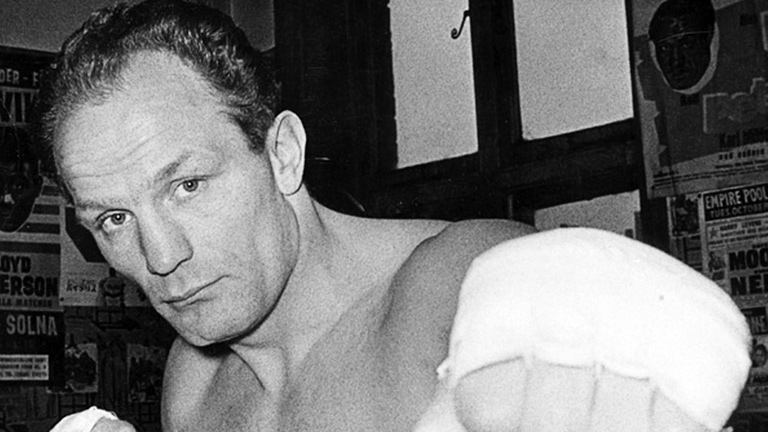 BERNARD HART was still fighting when he started selling his brand new Lonsdale boxing shorts from a cabinet in a basement gym in London’s Fitzroy Square.

Hart got permission from the Lonsdale family to use the name and in Walker’s gym, now a lost outpost on the boxing map, he listened to fighters and started to take orders. He was running the new business from the gym and having eight-rounders at the Bognor Regis Pavilion at night.

The first Lonsdale shop, the beautiful Beak Street store, opened a year later in 1960 and Hart quit the ring, finishing as a pro with a record of nine wins from 16 fights. Beak Street is one end of Carnaby Street and Hart was there before Carnaby Street knew what it was.

Hart was a pioneer, make no mistake.

He had a vision that British fighters wanted bespoke boxing kit and that the young would wear American grey, the colour of university athletic wear. He was not on his own and a fella called Ben Sherman was in and out of the Beak Street store at the start of the sixties; Sherman had a crazy idea that he could make British kids wear the American button-down shirts. Ben and Bernard started clothing Mods from about 1965 and they are still doing it – that is vision. Paul Weller loved Lonsdale.

There was always more to Bernard Hart than boxing gloves.

In that Beak Street store the history of British boxing was told and retold, invented, dismissed, shaped and made glorious over and over again. It was all in the fine, bloody detail. Hart was then and remained a boxing encyclopaedia of both the amateur and professional game. To sit with him was to learn and to learn was to be richer in a boxing currency that was not for sale.

The store filled with boxing people, men buying equipment and others just going to talk and listen. It was impossible in the sixties, seventies and eighties to go there and not see somebody from the business or a celebrity. Tom Jones buying weights, Billy Walker playing darts. Hart delivered a boxing lifestyle from the opening; bold t-shirts declared Lonsdale London, slick bag gloves, the finest boots. The name was iconic quick.

In 1960 my father went to the shop on a Saturday afternoon. He was either 16 or 17 and boxed for St. Pancras ABC and, like hundreds of other young boxers, he went to the Beak Street store on a boxing mission.

“I wanted the slip-on bag gloves like the Yanks had – I never liked the ones where your fingers came out of the end. They had the good bag gloves at Lonsdale; everybody in the gym knew that,” he told me last weekend. I knew the story.

“Willie Pastrano was there, I recognised him straight away. He was not as tall as I expected. He asked to see my gloves, I handed them over and he put them on. He autographed the label and when I got home I unpicked the label with a razor and carried it in my wallet,” he added. That was a classic visit to Hart’s shop.

Hart actually had an office just a few minutes away in Piccadilly Circus. In the office there was a man called Basil with a wooden leg and he would string the tennis and squash rackets. Lonsdale was a sports shop, remember, not just a place for ex-fighters and fighters and managers and trainers to gather and tell tall tales. Hart ran a clothing line for the ice skater Jackie Harbord from that office – imagine, a sporting leisurewear range for a woman athlete in 1965. That is going some: Hart was always trying to innovate, get in front of any curves.

Back at the Beak Street store in the mid-Sixties a young kid called Ron Boddy was working in his school holidays. He was boxing at the Fitzroy Lodge at the time. He’s still a fixture on the boxing scene now. Boddy remembers that anybody wanting couture boxing boots had to take their socks off and stand on a piece of cardboard, the outline of the foot was drawn and then the cardboard was sent to the world’s greatest boxing boot maker, a man called Sid Cannel in Hayling Island.

Ron also remembers thousands of people coming through the door, men on their uppers, early millionaires, the great and the damned all gathered to talk and listen. And, buy the kit. “Tony Duffy and Richard Atkins managed the shop at the time,” Boddy told me. “Terry Downes was there, Emile Griffith came in for a t-shirt, the heavyweight Johnny Prescott came in with Mandy Rice-Davies, Twiggy’s manager, the wrestling referee Max Ward, Paddy Byrne, Frankie Taylor and just about every American fighter that was in London. It was an endless list.”

And then there are the epic pictures of Muhammad Ali in a Lonsdale t-shirt, training in London for the Henry Cooper fights, maybe the Brian London massacre. Ali was in there a lot. Cooper’s blood-stained Lonsdale shorts are out there somewhere. Those are the images of Hart’s Lonsdale that will remain forever, those and others from his relentless good as a charity organiser at events with the stunning Stella Starr, his wife of 40 years, next to him in a long gown. Hart was a decent man.

The Kray Twins had finished with their boxing careers by nearly a decade when Hart first opened his doors. However, they did call the shop all the time. They wanted Bernard to manage their fighters. He politely refused their persuasive request and was, as far as he knew, not on the death list that the brothers carried. Mickey Duff was on the list. Every gym in Britain had a piece of Lonsdale kit by the seventies. A bag, a filthy medicine ball, a dozen rank pairs of old sparring gloves hanging on a wall. Everybody I knew had a Lonsdale story. First gumshield, first gloves, autograph. Those stories are Bernard Hart’s life in a sport he loved.