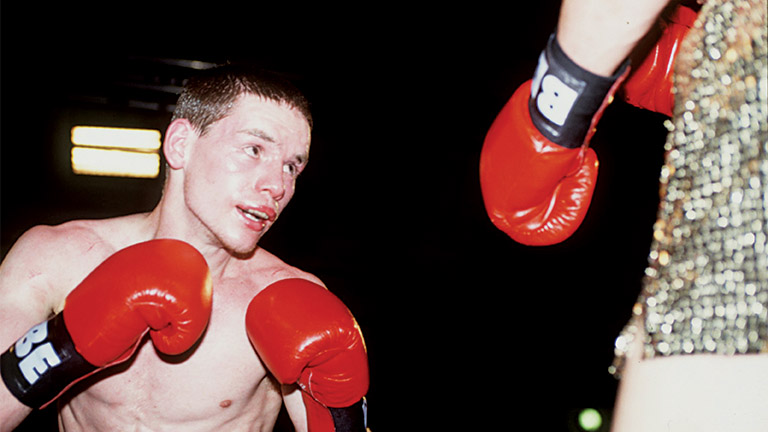 The statue of Bradley Stone brings back memories of The Fighters, writes Steve Bunce

LITTLE Bradley Stone is trapped outside the Peacock gym in Canning Town forever, his hands raised ready to fight, his eyes bright.

Every fighter and dreamer and fixer and wannabe with a pair of boots and mixed ambitions is introduced to the boxer’s statue before they have a chance to become a fixture. It is a ritual, not up for debate or discussion or disrespected. Others touch Brad’s glove each time they come and go.

Stone died in 1994 after losing a British title fight to Richie Wenton at York Hall. Wenton was never the same and turned away in his next fight when he had too many horror visions of Bradley standing in front of him that night in the ring.

In 1991 the film Fighters was screened on Channel 4 and it remains one of the finest and most truthful films ever made about boxing. It was made, and made possible, by the calm brilliance of a man called Ron Peck, the director. In the film, little Brad, who looks and sounds about 13, has some unforgettable lines.

The film follows a disparate group of fighters in East London. They move from gym to gym, from hope to despair, from glory to tears and Peck’s camera captures all of it. It could not be made now in an age when boxers are simply too aware of the camera. Peck made his masterpiece at a truly innocent time.

At the centre of the film is the faded local fighter, Mark Kaylor, and he is surrounded by about a dozen other boxers, all under the control of Jimmy Tibbs, surely the most East End of East End men. They live in each other’s pockets, get excited at the prospect of big fights and mourn together when things go wrong. And they do go wrong, shows get scrapped, men get injured and their desire to fight is tested. Stone is there, the kid in the gang. The wide-eyed local kid, a pilgrim from Mile End to Canning Town with a head full of hope.

Before his death, his words made me take a breath, after death it is close to unbearable to watch as Bradley talks about his life and his plans. He knows it will be hard, he’s not a fool. He is probably just 19 when the film was made, he was only 23 when he died.

If Fighters was made again as a drama, the same dialogue, action and ending, it would be an instant hit. The men in Peck’s great work were real and had lived a thousand lives at that point, but it was just the start: one was shot to death, one went to prison for serious gun offences, one trains a great heavyweight, one is a high-ranking Board official, none reached the promised land.

In Fighters they are just fighters, all men in the supporting circle surrounding the last dance of Kaylor, an idol with a devoted flock. The former guvnor here, Harry Mullan, believed it was the finest boxing film ever made. Harry might just be right. It does not have a happy end, I should warn you all in advance.

There was no money for the boxers. Peck certainly never got rich from it. And Channel 4 simply refuse to show the bloody thing or licence anybody else to screen it. They are sitting on a classic. Steven Berkoff still marvels at the cameo by Jimmy Flint, pro and one-time Wapping Assassin, and now an actor. Flinty takes Peck to his mum’s flat and delivers a masterclass, complete with shadow-boxing evil. It is mad, Flinty off on one with a lot of Robert De Niro, playing Jake LaMotta, playing Terry Malloy from Bud Schulberg’s On the Waterfront – you know the scene. The session with Flinty apparently ended only when his mum walked in with a tray of tea and told her little Jimmy to “leave the nice man alone.”

Fighters is packed with nice men.

Behind Stone’s statue at the Peacock last week, early on a Thursday morning, the latest fighters gathered for the weekly run. Martin Bowers herded his flock together. Daniel Dubois was there. Dudley O’Shaughnessy was also there, part of the dozen. Dudley, who won an ABA title boxing for West Ham in 2010, was due to fly to Buenos Aires for the Americas Olympic qualifier. That event collapsed the day before. He is waiting for news now, something more solid than the fragments of anecdotes that fill the gym. And it is a gym with stories, a place where three totally unconnected boxers can form a small triangle on the wall of pictures; I found Dave Armstrong, Keith Holmes and Johnny Clark nestled together. That is a trio of fighters nobody could ever connect.

So they take off in a pack, the new fighters from the Peacock. They run over bridges, by the ExCel, under the cable car, by the million-pound flats and race each other with growing intensity as the laps pass. The sun has blessed the cold morning. In Fighters they also run, I know it is not the same bridge across the railway lines, but the details make no difference, the look is the same and that is because these men are the same: Fighters.

This is what sweet Bradley Stone told Ron Peck all those years ago.

“Fighting is the main thing, I don’t know anything else. It’s the one thing I know really, boxing. I’m trying really hard, I’m going to make it.”

He did try really hard and so were all the men running in front of his statue last week.