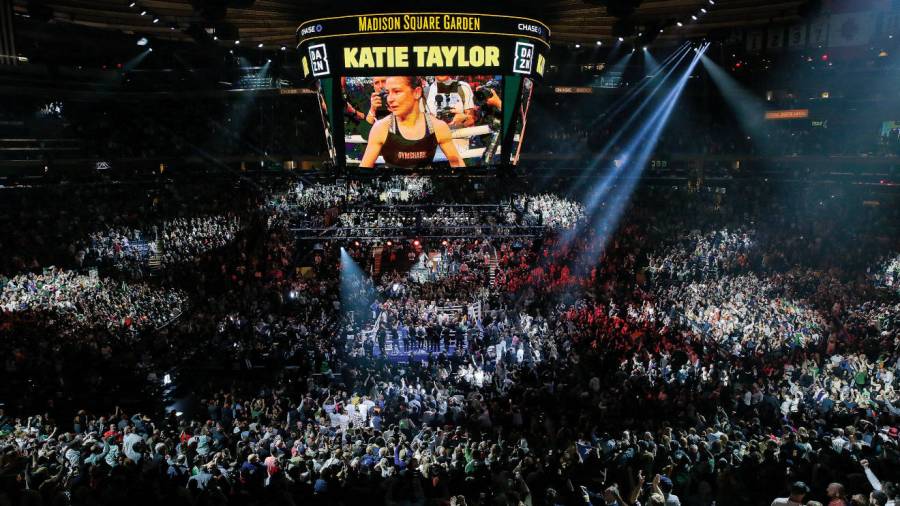 My love affair with New York began in a then-dangerous part of town alongside boxing royalty, writes Steve Bunce

THERE was once a boxing gym above a McDonalds next to the Port Authority in New York City. That part of the city in February 1991 was squalid; junkies, hustlers, retired junkies and retired hustlers were on every corner, in every gutter. It was smelly, dangerous and there were daytime rats. Nonchalant vermin, relaxed as a rat can be. Still, that’s where boxing gyms live in the city.

I had an old-fashioned fax in my hands, a long sheet of details and boxing records; the gym was the right one, I checked the address. It was right, I was surprised. I still have that three-foot scroll, but time has erased every word. It’s a ghost sheet, packed with my notes from fight week.

At about 2pm on that Thursday afternoon, the great Sugar Ray Leonard was scheduled to work out at the gym. On the Saturday we would both make our Madison Square Garden debuts; me in the press row somewhere and Leonard as a fighter in the fabled ring against Terry Norris. He was, no doubt, fighting in the same ring that Joe Frazier and Muhammad Ali had shared just 20 years earlier. I could smell that history.

Leonard was there when I managed to get up the packed stairs and convince somebody on the door that I was a reporter. I knew Mike Marley. I had met Phil Berger, but I didn’t know them well. A few years earlier I had written a letter to Berger asking for his advice on boxing writing.

Inside the gym on that afternoon there was a cold and bright light from the grubby windows; Sugar Ray was shadow-boxing and smiling. He was still only 34 and it is possible that he was just about the most perfect fighter I had ever seen. In the flesh, even in his fading flesh and even knowing now how harmful his cocaine habit was, Leonard moved like a boxing god. A few days earlier, I had probably been in the West Ham gym with Micky May watching him get his squad of kids ready for the latest round of the Schoolboy championships. The journey from Plaistow to the Port Authority is not actually that extreme – many have made it.

I had a Dictaphone and I got a few words with Leonard. I filed a short preview, including my Leonard quotes, to a couple of British papers, using the international free numbers that all the national daily papers had at the time. That’s living the dream, baby.

Leonard had lost just once in 38 fights, had not fought for 14-months and was the betting favourite that night. And, amazingly, only 7,495 tickets had sold. At ringside I saw mob boss and fur-coat aficionado, John Gotti, and a few seats from him, topless and out of control, was Mitch Green. The Teflon Don and Blood; I’m assuming that the two New York figures were comped.

Sadly, Leonard was fighting from memory; he was slow, brave and badly beaten. He was dropped twice. Norris was a super fighter that night. He had knocked out John Mugabi in a round the year before to win the world title. I remember how vicious he was in the ring against Leonard and how his punches had made a noise, a sharp crack. A definite sound of violence and hurt. I heard the same sound for a few rounds from the fists of Amanda Serrano. Perhaps the Garden acoustics can isolate that pain.

I was in no hurry to leave the Garden that night in 1991. I loitered, talked to people after the fight and finally got in the lift to find the street; it stopped a floor down and Terry Norris and his people, including his manager, Joe Sayatovich, a real cowboy, got in. I just listened as they talked about fights and mentioned Donald Curry. A snippet like that would get 1m views now.

It was not too late when I got outside and I walked about 50 blocks to a bar called Fanelli’s. The ancient bar has fight pictures on the wall. I did the same walk with Barry Jones last week. The walls at the bar are covered in hundreds of boxing photographs and prints. And then there is a much smaller one of a man facing the night and wrath and havoc of Big George Foreman. The man was Bob and he was the barman. I knew none of this as I hustled my way from the Leonard loss to the bar in SoHo. I had been told that it was a bar with boxing pictures; nobody mentioned the resident Foreman victim.

“That’s me,” he said. And it was. That is how you end your first ever visit to the Garden – you drink pre-craft beer with a man who went a couple of rounds with Big George. And he could tell the tale.

Last Saturday I was back at the Garden and back at Fanelli’s. There were no real changes; Bob the Barman has left the building, but his picture is still there. The Garden still takes my breath away each time I go there. Last Saturday, on Five Live duty, I got up on the ring once again and interviewed Katie Taylor. For a boxing hack, that lives somewhere in the fantasy realm. A night earlier, I had paid my respects to Bob at Fanelli’s. I do it each time; I can’t remember after what fight it was that I realised Bob the Barman never fought Foreman at the Garden.

In the picture, there is only Foreman’s back – well, it’s somebody. Foreman, you see, met a Don, a Chuck, a Jack and a Boone in early, early Garden massacres. He never wrecked a Bob in that sacred house. I know that now, but who travelled the city streets in 1991 with a George Foreman fight record in his pocket! I was not bothered – I like a good story and the Garden and Fanelli’s form a wonderful tale. And then there is Bob, and Blood and Gotti and Sugar so sweet one day above a McDonalds.