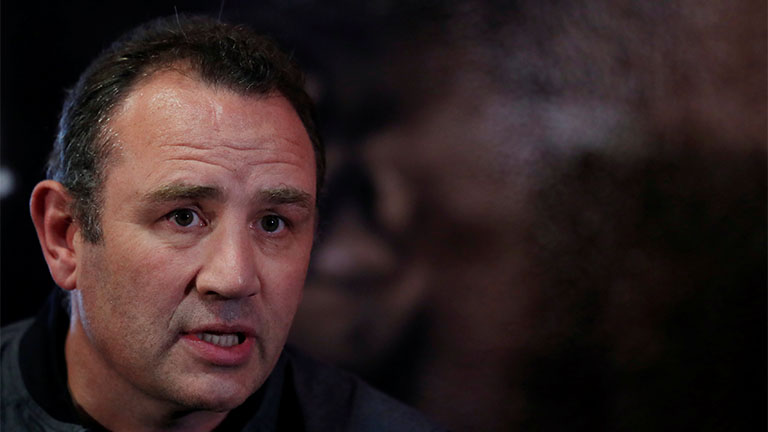 FOR just one night only Big Jay McFarlane made fat boxers in sombreros heroes once again in Altrincham in the very first fight of the latest Ultimate Boxxer.

McFarlane is a boxing joy, a delight to be near on fight night and a handful on a night out. He lost, no sweat, wore the battered pink sombrero with pride, he was expected to lose, but he was in the type of slugfest that people remember during a night of memories. The event makes stars of unknown, forgotten and neglected fighters for one night – some for longer. They walk with their heads held high accepting praise for their part in the fights. It feels like a show from a different decade.

It was a week of brutal contrasts that started at the airport in Saudi Arabia on Monday and finished near midnight on Friday in a changing room just before the UB final. I found Nick Webb there, two fights in and suffering, close to tears in some private recovery battle. Twenty minutes later Webb won the title. I’m not sure I have ever seen anybody more relieved at a boxing win. “I’ve got debts. It’s been a terrible year,” Webb told me. I suspect the truth is a lot darker.

It must be the hardest job in boxing telling a brilliant young amateur that he or she is not going to the Olympic qualifier and that means there will be no Olympic glory next year. At the GB Boxing awards (it was an honour to be asked to host) in Sheffield the 40 boxers in with a chance of selection – a maximum of 13 will be on the Tokyo plane – sat at tables, knowing that once again in their young life, there would be no real Christmas. Out of the GB gym, out of their sweat-soaked and stained clothing they all scrubbed up like children at their first adult wedding. They looked like the crazy dreamers they are.

In January the women go to the USA and the men to Kazakhstan; it’s gruelling, cold, harsh and a brutal but effective part of the selection process. Some know, some dream, some will be crushed when they get the call. “It’s never easy,” said Rob McCracken, fresh returned from his Saudi duties. It is McCracken’s third Olympics and possibly the hardest selection process so far, a process muddled by the AIBA fiasco.

The gut-wrenching selection process is generally eased by natural qualification at the world championships; boxers reach a certain stage and automatically qualify for the Olympics, a simple system that has been scrapped as AIBA’s position at the IOC has diminished. It means that next year’s five qualifiers across the globe will be uniquely difficult – there will not be any easy weights, nobody will be missing when the draw is made.

One of the GB female boxers at the qualifier in London might even, according to news from Liege, have to face Delfine Persoon. Yes, that Persoon. It just might be the BBC’s Young Sports Personality of the Year, Caroline Dubois, against Persoon in the first round at 60kilos. That is quite mad. If it happened – and it could, trust me – it would be the greatest blurring of the thin line between professional and amateur versions of the sport since Pete Rademacher won Olympic gold in 1956, turned professional and in his very first fight lost in six nasty rounds to Floyd Patterson for the heavy championship of the world. In Rio the professional boxers who qualified, including two former world champions, fell short, beaten by the rigours of making weight daily and the speed of the shorter contests. Dubois was at the awards.

Each year the men and women at Icap, an alliance of money traders worldwide, put on their fancy dress, work the phones, make money and donate millions from the day’s trading to a selection of charities. This year, Carney’s Community, a stunning project helping the disadvantaged with a boxing gym at its very core, in south London was one of the selected charities. I had an invite from the club to attend. I was nervous from the moment I got to the Icap offices in London’s East End. I was surrounded by Peaky Blinders – actors and those in fancy dress – and other television and entertainment celebrities. Sadly, I was also in the celeb category with the glitterati. The two women dressed as angels in charge of me were understandably underwhelmed when they got me instead of a torso from Love Island.

George Turner, who runs Carney’s – which is named in honour of the Fitzroy Lodge’s Mick Carney – had a room at Icap’s offices and two of his people were there with the pads and gloves. Fancy dress jokers, hookers, peakers and clowns all had a go. The two men were both referrals from either the police or the prison service. Carney’s Community is deep on the frontline, a referral is essential to just get to the boxing sessions and the salvation on offer. Postcode violations, gang affiliations and just simple blade stupidity is normal. The Lodge and Carney’s are joined at the hip. George has been at far too many funerals.

Sadly, I’m clearly not such a great celebrity ambassador and next year I’m sending Big Fred Sirieix in my place. I was competing against Ray Winstone, Strictly regulars, that woman off Eastenders, David Walliams and daytime-TV royalty. I had no chance, I got a kicking. I was introduced to a table of traders, all men and all dressed as a Virgin air stewardess for the charity day, as “the famous Phil Bunce.” It was met with silence, they had never heard of him either. I know when I’m beaten and I made my excuses and left. I did my bit and Carney’s Community will get their bit.