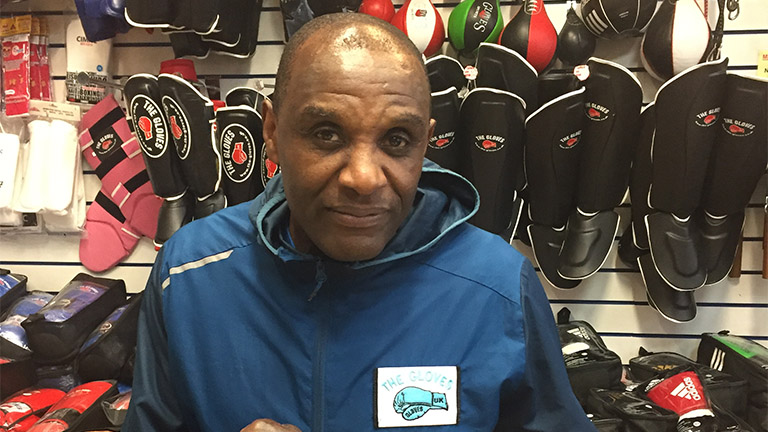 IT feels like The Gloves is the oldest boxing shop in the land, a place filled with ropes, boots, bags and memories. And fight people.

Inside the shop, fights play on a screen every second that the door is open and people wander in from the cold, silently watch a few minutes, nod their heads wisely at stoppages and then walk away. Often they never say a word, the shop is part institution, part retail relic.

Vince Smith has run the shop in Birmingham’s market for over 20 years and before that he had a stall selling boxing equipment in the same remarkable market. It is home to such splendid outlets as The World Famous Sock shop, you can buy a coat and cufflinks from the discarded parts of a million Jaguar motors.

Big Vince was the ABA champion in 1978, silver medallist at the Commonwealth Games the same year and a veteran of fights behind the old Iron Curtain with nothing more than a cotton England vest as his protection. His credentials for fitting you for sparring gloves are impeccable and it is a fading art of measurement, science and feel. Smith knows when the gloves fit you before you do.

“I don’t have a single minute of any of my fights,” Smith told me. “The ABA championships, the Commonwealth Games – all the England appearances, not a bit of film. I’d like that.”

I ask about his eight wins, in seven stages to win the ABA title. “Nah, man, it was more than that. I had six fights to win the Birmingham regional at Longbridge.” I tell him there are only two recorded bouts on that day. “It was six, that’s how hard it was.” Later in the championships he stopped Placid Gonzales and beat Dennis Andries in the semi-finals. Vince Smith could really fight.

“I had offers to go pro, a lot of offers, but there was no money for signing,” Smith added. “It was not worth it. I hear now it is great for amateurs – that would suit me fine.”

He has no regrets, but there are plenty of memories for Vince. “I boxed a Russian and he dropped me, I remember it clearly. I got up and told the ref to step away, I tightened my gloves and then I chased him, trapped him and couldn’t stop hitting him. Not a lot of English boxers beat Russians back then. I did, great days. I boxed another guy in East Germany and dropped him four times and still lost. Four times – can you imagine?”

I have to say that “tightened my gloves” is a real blast from the past. Beautiful.

So the people in his store listen to him, marvel as he shapes up, giving tips and watching as they hit a bag with their new gloves in the ancient Gloves. It should be a place of boxing homage and for a tenner, in the market just outside his door, you can buy a faded blue jacket from the Rolls Royce production line, a jewelled phone case, a tea and a plate of sizzling chips. You might get change, trust me.

There is a chance that the market will be demolished, The Gloves closed or forced to move. It is all part of a new Birmingham dream. If Vince Smith and The Gloves leave the city centre the place will be poorer for the loss. Smith is a forgotten craftsman, holding out against change in a real place, looking after a city of natural fighters. He would be missed. Meanwhile, his door is still open, the fights are showing. Go take a look, say hello to the man.

THE final resting place of Robert Wangila has been brought to my attention and what a crazy tale it is. I met Wangila’s wife in Las Vegas after the Tyson Fury-Deontay Wilder rematch. I had been thinking about where Wangila was buried before I met Grace. I never asked her. It’s lucky I never did – this is his story, well, this is what is official.

Wangila’s body was flown from Las Vegas to Nairobi and it appears that the American fight fixer, Akbar Muhammad, paid for that. Muhammad is the guy who a few years ago was going to take Mike Tyson-Lennox Lewis to Dubai.

The Kenyan High Court was involved.

It was claimed that Grace and Robert were no longer married. It was claimed she had married twice since the divorce. It was not true, the judge warned the man making the claims. Grace took a kicking.

There is more confusion: the Council of Kenyan Muslims wanted him buried in accordance with Islamic customs. Wangila had converted to Islam in America. There was a nasty impasse.

There was actually a burial committee. Wangila was a Kenyan idol.

Akbar wanted his 25 grand back, by the way. The burial committee and Grace were Akbar’s targets for compensation.

The Court was packed with gawpers and lawyers, fighting over Robert Wangila’s body.

The judge at the hearing finally settled on a Muslim burial at the Kariokor cemetery. Anyway, now I know where Robert Wangila is buried. This story feels like it is not over.