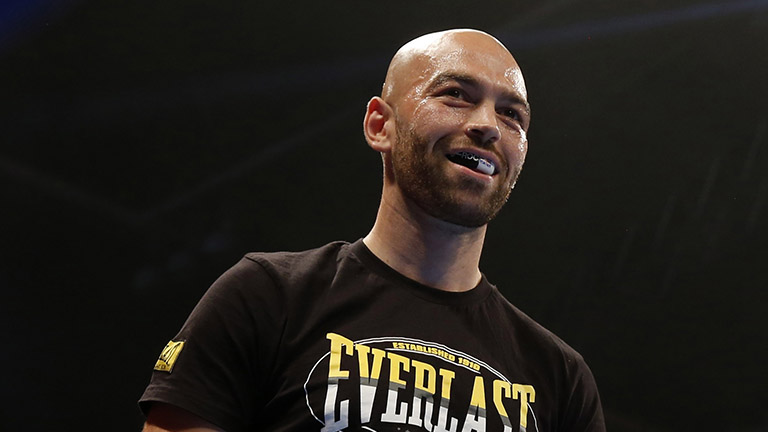 JOHN DRING continued his unbeaten run as a young pro with a hard-fought win over Luke Fash.

The pair did battle at the Knowsley Leisure and Culture Park where Jamie Kirkpatrick was the third man. The fight formed part of the inaugural offering from David Nelson in his guise as Trinity Entertainment Boxing and secured more interaction from the crowd than previous affairs in an entertaining night featuring music acts.

That said, there was a slight lull in the action as the left glove of Scouser “Dringy” had to be taped, prompting Hull’s Fash to ask whether anybody had a pillow due to the length of the delay.

As we got back underway, both fighters were warned about the use of the head but it was Dring who came out on top after the referee turned in a tally of 40-37.

Widnes’ Josh Breeden kicked off proceedings by getting his professional career off to a flyer. The 21-year-old overcame Cambridge-based Gianni Antoh — who arrived unaccompanied and had house second John Smith running his corner — to the delight of the paying public.

Breeden was given sound advice by coach Terry Spencer throughout the fight and was warned against getting complacent. It was scored 40-36 and Breeden, who began showing some flashy skills in the final round, will be hoping to get out again sooner rather than later.

But there was disappointment for Jay Platt as he was beaten on his pro debut by Driffield’s Danny Little (pictured above). Liverpool’s Platt was hurt early on and Little’s corner implored him to plough forward in a bid to secure the win. At the end, Kirkpatrick gave it to him by 39-37.

The Verdict A solid start for Nelson in the promotional game as he looks to mix boxing and music.

IT was all good news for Doncaster’s unbeaten heavyweight Mark “Bad News” Bennett as he cruised to a comfortable 60-55 victory over Grantham’s Miles Willington at North Notts Community Arena.

Bennett dominated the durable Willington from start to finish and credit must be given to the Grantham fighter for hanging on, when on the receiving end of Bennett’s heavy right hands.

Patient throughout the fight, Bennett came into his own in rounds five and six with some hurtful combinations that left Willington glad to hear the final bell. The Doncaster man must now be in the mix for a Central Area title shot based on this performance.

There was controversy as local light-heavyweight Dylan Clegg moved stayed unbeaten with a 39-37 victory over Latvia’s Raimonds Sniedze on referee Shaun Messer’s scorecard. Worksop’s Clegg seemed a little nervous but did just enough in the final round to edge the contest.

Sniedze was that upset he stormed out of the ring upon seeing referee Messer raise his opponent’s hand.

Performance of the night came in the battle of two debutants at middleweight. Worksop’s Declan Cairns stopped over-matched JJ Smithjust past halfway in round three (timed at one minute 41 seconds).

Cairns shook off some early nerves to dominate the Kent-based Smith, who managed to find himself forced into the corner and offered no response to a dozen or more punches. This left referee Messer no option but to wave the contest off and delight Cairns’ army of fans.

There were convincing shut-out victories (both 40-36) for Sheffield’s Sonny Price and Doncaster’s Cameron Kaihu over Cardiff’s Rhys Saunders and London-based Italian Victor Edagha respectively. Both fighters gave Mr Messer his easiest jobs of the night with his scorecards.

The Verdict Cracking show and atmosphere at this JE Promotions show.