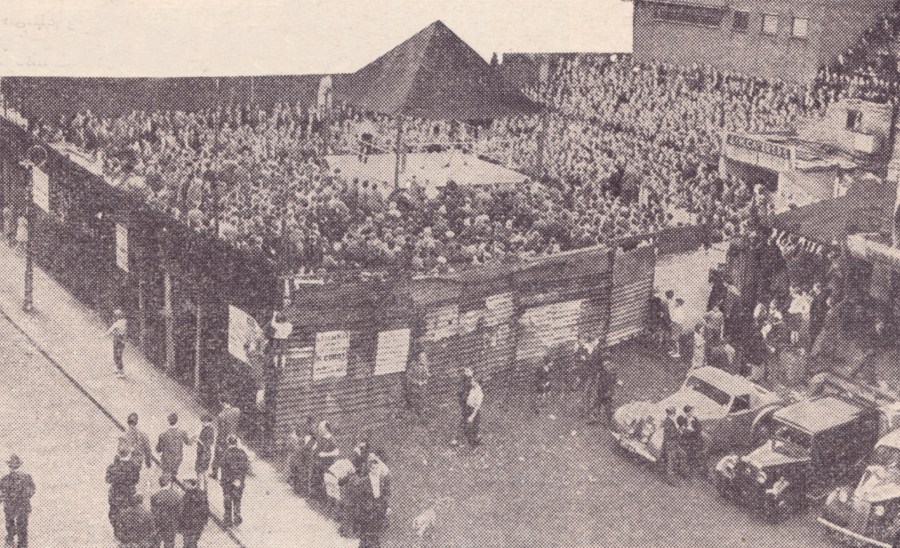 BOXING venues come in all shapes and sizes, but I doubt fans of any era saw bouts in a more quirky setting than the Londoners of the 1930s, 40s and 50s who watched fights at the Mile End Arena.

Situated behind Mile End Tube station in the heart of east London, the Arena was so basic it makes Bethnal Green’s York Hall seem luxurious. Its walls were a mix of crumbling brickwork and rickety corrugated iron and its tiny ring was covered with a canopy, which when it rained was often held up by a broom.

The boxers changed in a dirty shed with no showers and were carried to the ring on piggy back because the ground was too rough and muddy for boxing boots. The spectators, who crammed in like battery hens, were completely exposed to the elements and many would leave with their suits marked by the arena’s white-washed walls. But its derelict condition was part of its charm and the Arena’s atmosphere by all accounts was something to behold.

On a balmy summer’s evening, 2,000 or so fight-goers dressed in suits and hats would file in through its entrance on Eric Street for a modest admittance, while children and thrifty adults climbed on to lampposts and adjoining buildings for a free bird’s-eye view of the action. Passing policemen bawled officious warnings at these fare-dodgers only to be rebuked by cries of ‘Leave ’em alone!’ – and less polite remarks – from the paying customers.

After a visit to the Mile End Arena in the early 1950s, Welsh heavyweight boxing legend Tommy Farr enthused:

‘The Arena isn’t the most comfortable place in the world, but I had a great time because I saw boxing that cracked with all the lusty vigour and spirit of the boxing booths as I used to know them… The place was filled with people who wanted to see fighting – and did. How East Enders know their boxing. They don’t want to see anyone who should have ribbons in his hair. It’s two-fisted gladiators with guts they demand. When a fight is finished, there’s no polite, meaningless applause. That has to be earned. The old booth rule of “Get the next two on quick” applies. With places like this, boxing won’t die.’

British boxing stars of bygone days such as Sammy McCarthy, Eric Boon, Harry Mason, Al Phillips, Arthur and Alf Danahar and Harry and Lew Lazar all boxed at the Arena. The Kray twins, Ron and Reg, who had brief professional boxing careers, made their debuts on the same night there in July 1951, and the world-renowned Mickey Duff learnt his trade as a matchmaker there at around the same time.

Because of its open-air structure, Mile End Arena only held boxing shows during the summer, and in the winter the site became a fairground. It first opened for boxing in April 1933 and held its last show in September 1953, just as a harsh new 33 per cent live entertainment tax was putting small-time promoters out of business.

As part of a book-writing project, I had the privilege of interviewing seven professional boxers of the 1940s and 50s, six of whom boxed at the Mile End Arena. Former British featherweight champion Sammy McCarthy (Stepney) remembered it as ‘a bomb ruin’ while the late Teddy Berry (Bethnal Green) described it as ‘like a great-big car site made into a boxing arena’, though for Sid Nathan (Aldgate) it was ‘like a cattle market’. Through the boxers’ reminiscences, the Mile End Arena and other forgotten places (and forgotten people too) are brought sharply into focus in the book.

Alex Daley is the author of Fighting Men of London: Voices from Inside the Ropes, which explores the lives and careers of seven old-time London professional boxers who were part of a special era of British boxing. To find out more visit: http://www.pitchpublishing.co.uk/shop/fighting-men-london