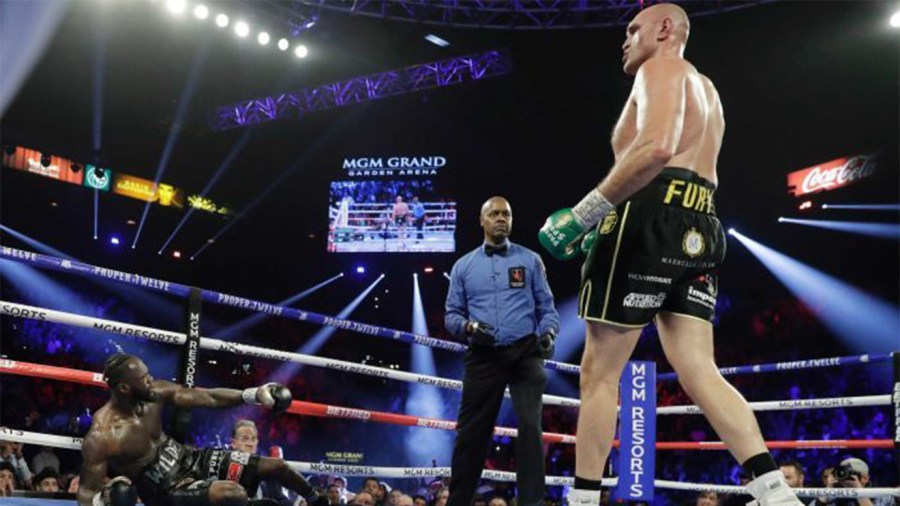 IN one of the most sensational performances by a British fighter in America, Tyson Fury stopped Deontay Wilder in the seventh round of a fight he dominated from the start. This victory comes just over four years after he went to Germany and dethroned Wladimir Klitschko.

Inside Las Vegas’ MGM Grand, a sell-out crowd of 15,816 (which made it the highest grossing gate for a heavyweight title fight in Nevada history) went wild with delight. Most were here to support Fury, who came to the ring on a throne, ever the showman and once again the champion.

Beforehand, Fury had promised he would not just beat Wilder but knock him out. For many observers, such tactics were insanity against a puncher like Deontay, the unbeaten WBC heavyweight boss, who has always thrived when opponents come to him.

But Fury proved the doubters wrong. Wilder’s right hand caused Fury serious problems in December 2018 when the pair shared a draw. This time, it was Fury’s right hand that was the contest’s defining weapon. He made Wilder look basic and ordinary and exposed him again and again with it.

And, in the third round, he dropped him with it. After positioning Wilder on the ropes, he fired through Wilder’s guard. The Alabama fighter, shocked and surprised, tried to claim it was a slip but it was a heavy knockdown. Fury was in scintillating form and Wilder’s title, less than 10 minutes into the contest, looked almost certain to be changing hands.

Wilder was getting increasingly tired. He instinctively retreated to the corners and ropes. He positioned his body to try and land the kind of punches he’s renowned for. But Fury, fighting with aggression, clever aggression, was a different class.

Two left hands dropped Wilder again in the fourth. Again his first instinct was to look at the canvas and indicate he had slipped. Moments later he went careering back, he really had lost his footing this time, but it highlighted how totally exhausted he was.

Round six and the thrashing continued. Wilder was landing the odd shot, but most he threw were wayward. He’d never been under sustained pressure like that before. When they were close, Fury pushed down on Wilder. Everything was designed to take the fight out of him.

At 1-55 of the seventh round, the fight was over. Locked in a corner, Wilder took more right hands. He tried to cover up but the shots were getting through. His eyes were glazed and his legs unsteady. The towel came in from Wilder’s corner and the referee, Kenny Bayless, stopped the fight. It was the right decision.

Wilder has 30 days to trigger the clause in the contract for the third fight. Whatever’s next for Fury, it’s unlikely anyone will doubt him again.