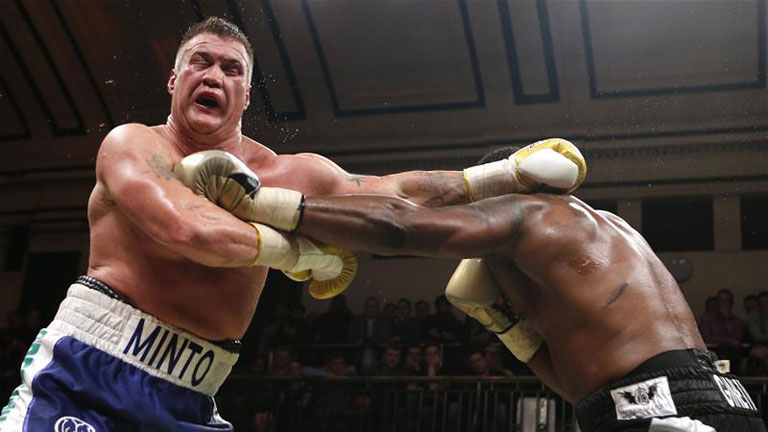 COMING in as a short-notice foe for the unbeaten Dillian Whyte (who is himself looking ahead to a December clash with Anthony Joshua) Butler, Pennsylvania’s Brian Minto is in London and looking ahead to Saturday’s fight at The O2.

Currently staying in a hotel in the centre of the nation’s capital, the 40-year-old with the hard-earned 41-9(26) pro record is ticking over as he awaits the first bell.

Here, Minto – who is both used to taking short-notice fights and to being the underdog – speaks ahead of his fight with Whyte:

Q:  You’re already in London then, when did you get in?

Brian Minto:  “Earlier today [Tuesday], this afternoon your time, I think [laughs]. It was a pretty long flight. But not as bad as from America to New Zealand, which I’m used to these days.”

Q: How much notice were you given for the fight with Dillian Whyte?

B.M:  “I was first offered the fight four weeks ago and I turned it down; not enough money. That’s the part of the game that’s bad for the fighters, they [promoters/managers] can cut money off the top, which hurts the fighters. But then I got a direct message from Eddie Hearn and we were able to make a deal. It’s quite a bit more money than the earlier offer. I’m 209 [pounds] right now, so I am a heavyweight. Although I kind of feel as though I’m out of my weight class here. I can’t be the bully against these bigger guys. There really needs to be a super-heavyweight class, to help out us guys at around 215 to 220.”

Q: How much do you know/have you seen of Whyte?

B.M:  “I didn’t even know his name until I was offered the fight. But then I looked him up and he seems a very strong kid, not many of his opponents have stuck around too long. He’s dangerous and I give him respect; he seems like a good up and coming prospect. Maybe he doesn’t have as much experience… This is boxing and anything can happen. They offered me a good cheque and this is the shortest notice fight of my career I believe. But this is nothing new to me. He seems heavy-handed and I give him respect. ”

Q: It’s a good pay day, and you deserve that for saving the show after Guinn pulled out – but you are coming to win?

B.M:  “Oh, of course, I always give a good effort; I’m coming all guns blazing. I know he’s long and tall and I can’t stay on the end of that. I do feel I’m out of my weight class – really, I feel at home fighting 200-pound guys – but it’s a good fight and this is a great chance for me.

Q: It’s no secret Whyte is set to face Anthony Joshua in a big fight in December and he says he wants rounds on Saturday. Has Whyte perhaps not realised how tough you are?

Q: Yeah, and he’d have to pay you a great pay day for that fight! How come you have been boxing in New Zealand recently?

B.M:  “Well, I beat [Shane] Cameron. Then I fought in the [cruiserweight Super 8] tournament. That was the most horrific call of my career, the final. I lost a split decision. I won two, maybe three of the [three] rounds and then they had it a draw and we boxed what they called an extension [a fourth-round] and he won. This after I’d beaten the toughest guy in the tournament, a tough and tricky left-hander.  I also fought [Joseph] Parker over there and that didn’t go too well. I broke my nose about a week before the fight and should have pulled out but didn’t, which was a bad mistake, you know.”

Q: And do you have a good team, your usual team, around you here in London?

B.M:  “Yeah, well, with the short notice, it was tough getting anyone I know to come over. But I have one good guy I know well, Jumbo; he arrives tomorrow. I’ll rest a little, maybe work out and sweat some tomorrow and leading up to the fight; shadow boxing. I look forward to a good fight and this may not be my last fight.”