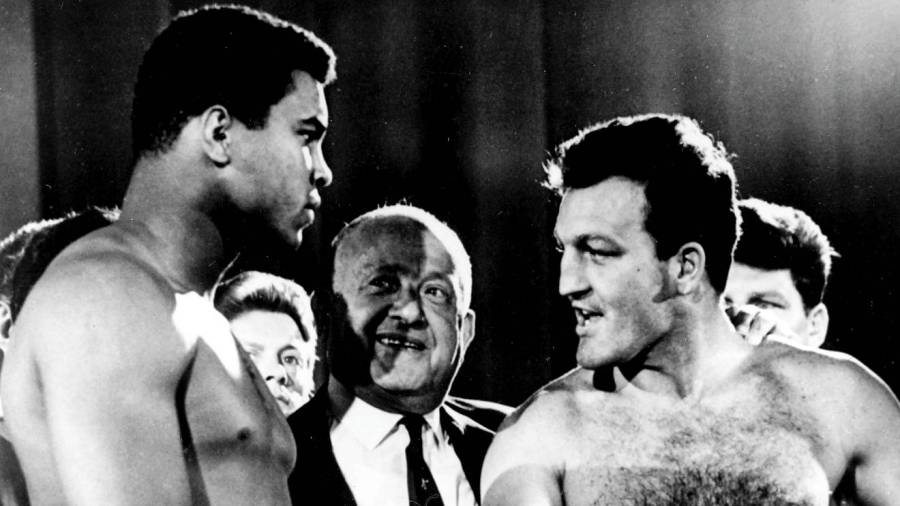 BRIAN LONDON, who plied his trade a generation before Lennox Lewis destroyed the narrative of “horizontal English heavyweights,” died on June 23 at age 87.

London was born in West Hartlepool. He turned pro in 1955 and won his first 12 fights, 11 of them by knockout. Then he fought a 21-year-old prospect named Henry Cooper and was knocked out in the first round.

London had trouble against world-class opponents throughout his career. He fought Cooper three times and lost each time. He was beaten by Nino Valdes, Eddie Machen, Ingemar Johansson, and Joe Bugner, and came up short twice against Jerry Quarry. On a more positive note, he held the British and Commonwealth heavyweight titles for seven months by virtue of a 1958 stoppage of Joe Erskine. He ended his career in 1970 with a 37-20-1 (26) ring ledger.

London’s place in boxing history is secure as a consequence of two championship fights. On May 12, 1959, he challenged Floyd Patterson for the heavyweight crown and was knocked out in the 11th round. More memorably, on August 6, 1966, he fought Muhammad Ali at Earls Court Arena in London.

Ali, age 24, was nearing his peak as a fighter and in the midst of an eight-month span that saw him defend his heavyweight title five times, culminating in a November 14, 1966, demolition of Cleveland Williams. London never had a chance. Ali dropped him with 12 unanswered punches fired within three seconds to end matters in the third round.

Years later, in an ITV Sport documentary, London said of that fight, “I was smaller, fatter, and couldn’t punch. He stopped me in three rounds and that was it. I don’t think I hit him.”

London’s passing rekindles two personal memories for me. The first dates to 1989. I was taping an interview with an aging Howard Cosell as part of my research for Muhammad Ali: His Life and Times. We were in Cosell’s apartment on East 69th Street in Manhattan. Howard was tired, asked to take a short break, and lay down on the sofa. Twenty-five minutes later, still lying down, he began to reminisce – or I should say, sing.

I turned my tape recorder back on:

A foggy day in London town,
Had me low, had me down
I viewed the morning with much alarm
The British Museum had lost its charm.

Cosell had transported himself back in time to an August 1966 encounter with Brian London. A somewhat disjointed stream of consciousness followed:

“Flying up to Blackpool. London not there at his training camp. Going to London’s home. We flew out of Gatwick in the ABC News plane. His wife, a pretty woman. ‘Where’s Brian?’ ‘He’s playing squash.’ Off we go to Whitney Air Force Base. This is the base where they shot Twelve O’Clock High. Remember that movie? One of the great motion pictures of World War II. Gregory Peck. Gary Merrill. The son of a bitch [London] was playing squash. And he was a better squash player than he was a fighter. I’ll tell you that. Believe me. So they bring London over, and I say to him, ‘Everybody says you don’t have a chance, that you’re no fighter at all.’ He says, ‘I’m gonna kill you.’ I say, ‘It’s not me saying it. It’s the goddamn newspaper people.’ He says, ‘I’ll kill those sons of bitches.'”

My second vivid memory involving Brian London dates to 1991. I was at a dinner in Manchester honouring Ali that was attended by a dozen former British champions. Brian and I were seated next to each other at the dais. When it was his turn to speak, he walked to the podium and began reading remarks that someone else had prepared for him. Clearly, the remarks weren’t to his liking. He got as far as “Muhammad Ali brought us all a lot of pleasure.” Then Brian stopped reading and proclaimed, “What a load of b*****ks. I got no pleasure at all from him. He beat the living daylights out of me.”

Maybe so. But later that evening, Brian told me, “If you’re a fighter, you want to fight for the heavyweight championship of the world. I did it twice. No one can ever take that away from me.”

Thomas Hauser’s most recent book – Staredown: Another Year Inside Boxing – was published by the University of Arkansas Press. In 2004, the Boxing Writers Association of America honored Hauser with the Nat Fleischer Award for career excellence in boxing journalism. In 2019, he was selected for boxing’s highrest honor – induction into the International Boxing Hall of Fame.

Thomas Hauser has authored 50 books on subjects ranging from professional boxing to Beethoven. His most celebrated work is <em>Muhammad Ali: His Life And Times</em> - the definitive biography of the man who was once the most famous person on earth. The British edition was honoured with the William Hill Book of the Year Award. Hauser's first book – <em>Missing</em> – was nominated for the Pulitzer Prize, Bancroft Prize, and National Book Award, and served as the basis for the Academy-Award-winning film starring Jack Lemmon and Sissy Spacek. Subsequently, he co-authored <em>Final Warning: The Legacy of Chernobyl</em>, which secured his reputation as a responsible and reliable social critic. The film version of <em>Final Warning</em> starred Jon Voight and Jason Robards. Each year, the University of Arkansas Press publishes the articles that Hauser has written about boxing during the preceding 12 months in book form. In 2004, he was honoured by the Boxing Writers Association of America with the Nat Fleischer Award for Career Excellence in Boxing Journalism.