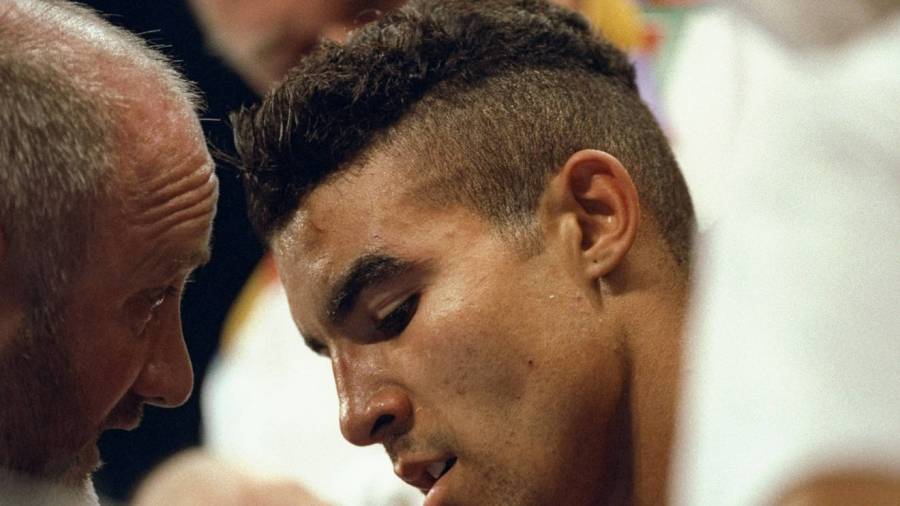 Claude Abrams pays tribute to the free-thinking Brian Hughes MBE, a man of value and principle

I OWE a lot to Manchester boxing coach Brian Hughes, who passed away on January 25. He was 82. Brian and I go back over 35 years. There was probably no-one who influenced my path in boxing more than he did.

We first met in 1986, long before I ever became editor of Boxing News. I was just a teenage amateur boxer with dreams and an obsession for the Kronk Gym in Detroit, where Brian had visited several times with his boxers.

Before that initial meeting, though, Brian and I had been in contact for about four years. I remember the headline ‘Kronk means kindness’ in the Boxing News letters section around 1981, detailing how he’d visited the Motor City with some of his amateur boxers (Ensley Bingham amongst them) and had been treated like royalty by Emanuel Steward, who he had known since 1976.

I reached out to Brian and we wound up corresponding as people did in those days by mail and hand-written letters. It always occurred to me how generous Brian was to have devotedly replied to my many questions from just the goodness of his heart. He had a wife, Rosemarie, and four children, Anthony, Damian, Rachael and Chris plus a full-time job and busy gym to operate.

He was always encouraging to me and prepared to offer advice and share the deep knowledge he had for the sport.

Every letter finished in a similar fashion, with Brian wishing my family well and saying, “I will do all I can to help you. Just let me know.”

I held Brian in high regard for that level of unconditional generosity as it showed the measure of the man. He was a mentor, father, husband, teacher and friend. It was hardly surprising to me that years later he would be awarded an MBE for his services to boxing and his community and have a street in Manchester named after him.

Brian may have been regarded as a rebel in many quarters, but I came to realise he was a free-thinking man of value and principle who wouldn’t compromise to any authority or individual, even his boxers.

“I give all my lads 100 per cent coaching and honesty and loyalty,” he told me.

In July 1986 he allowed me to tag along on a boxing trip to the gym of former US national coach Joe Clough in Orlando, Florida he’d arranged for the boxers of his gym, Collyhurst and Moston. That’s where I first met Pat Barrett, his prized student who under the name of “Black Flash” would go on to become British and European light-welterweight champion and now, along with another ex-Hughes fighter in Thomas McDonagh, continues Brian’s legacy as a trainer and runs the gym.

Brian was a wise owl with a deep admiration for old-time boxers. He was secure enough in his knowledge and abilities to trade ideas with other trainers around the world. He was a coach, but always a student – constantly on the look-out to expand his tool kit. You couldn’t buy his level of enthusiasm and curiosity, not to mention his acumen, experience and sharp eye for detail. His dream, like most coaches, was to produce champions – and he did.

Most of Brian’s boxers were stylish and defensively capable, but never from the same mould. He knew precisely how he wanted to coach and develop his fighters. Brian loved the loose, relaxed American style of boxing.

Brian would always look to build on the natural attributes of his pupils and allow them to flourish accordingly. He’d sit them down and study tapes of the past greats and then put what they observed into practice in the next gym session.

Defence always came first. “I believe in catching them young,” he said. “That way you can really coach the lad in defence. If you can teach them to stop the other lad hitting them, you’re more than halfway to success.”

For Brian, boxing was an art. “Skill must come before all else,” he insisted. Brian demanded commitment because that was the trade – he would offer the same in return and knew just how tough and dangerous the sport was. Often he’d part ways with boxers who wouldn’t put in the effort. There were also many talents who left for other reasons – distracted by girls, drink and crime. And there were those who believed the grass would be greener elsewhere. That form of departure, after all the hours of work Brian had put in, would always carry an emotional sting.

Many successes at regional and national level started in his Collyhurst workshop. In addition to Barrett, he guided Robin Reid [pictured above with Hughes] to a WBC super-middleweight belt and domestic champions like Michael Gomez, Anthony Farnell, Michael Jennings and Scott Quigg. From an earlier era, he coached Kenny Webber, Lance Williams, Tunde Foster and Blaine Logsden.

As success came his way, Brian remained the humble family man I knew. So much about boxing frustrated and tormented him, but he was tirelessly dedicated to the ring troops he had nurtured since he began coaching in 1965, initially as a way of getting kids off the streets. He was never afraid to battle with promoters or regulators because his priority was taking care of the young men under his charge.

“The boxer is the most important person in boxing,” he said. “All humans should be treated like humans.”

Never did he reject my calls to pick his brains or deny me access to his boxers or request favours that would compromise my impartiality. When I was a journalist, we’d usually talk once a week. He was fair and honourable and never took to heart any criticism I made.

I still recall the delight on his face in 1989 when Pat – in what was considered a major surprise – knocked out former Olympian Tony Willis in St Albans to become British champion. The following year, when Barrett captured the European title in an outdoor arena in Salerno, Italy, Brian was suspended and had to watch from ringside – I gave up half my seat to him!

The suspension was for Brian’s part in engineering the comeback of Lance Williams, who’d had his licence revoked for an cataract injury but passed a medical and came back under the name of Tony Dore – until his cover was blown.

It denied Brian the opportunity to be in the corner on Barrett’s most triumphant night, but there would be many other occasions to celebrate, notably in Italy again, this time with Reid when the former Olympic bronze medallist toppled Vincenzo Nardiello in Assago in 1996 to become ‘world’ champion. Gomez and Farnell shared in some fabulous Manchester nights at a time when Ricky Hatton set a sizzling pace in the city. And Jennings, though on the losing end against Miguel Cotto, would give Brian a taste of main event status at Madison Square Garden, New York.

While Brian is best known as the trainer of champions, he was also an author of several books – I particularly liked the excellent Hitman, the story of Thomas Hearns, which he co-wrote with his son, Damian, an international speaker and psychology professor.

From the young kid hooked on boxing at the age of 10, who loved Randy Turpin, never made it as a boxer himself and, as he often told me, didn’t receive much of a formal education, Brian discovered his talents in other ways and evolved into an admired fatherly coach who was ahead of his time.

Brian retired in 2011 – two years after I had left Boxing News. In later years his health sadly deteriorated with vascular dementia. But the impact he had on those who knew him well will never fade.