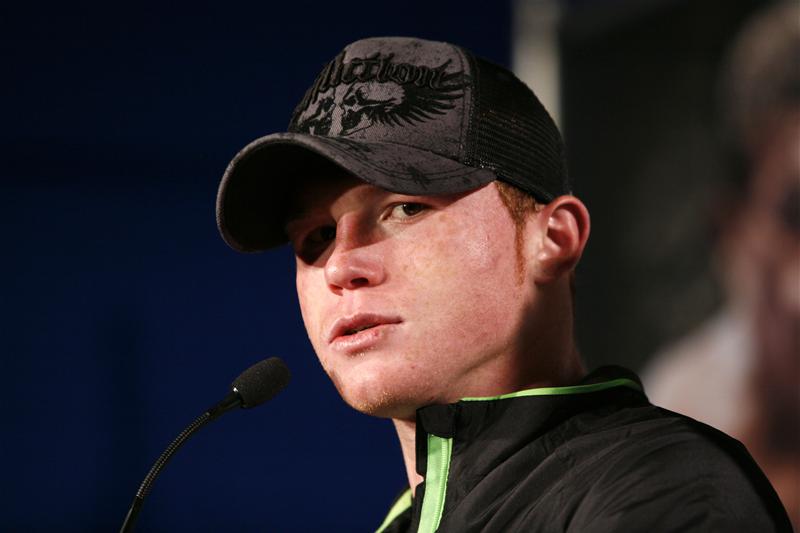 IT seemed like a wind up. A few hours ago nothing was further from our minds than Amir Khan fighting Saul “Canelo” Alvarez. The Mexican icon had been granted a tune-up before putting his WBC middleweight title on the the line against Gennady Golovkin, he was therefore expected to box someone more like Gabriel Rosado (Golovkin for instance could box Dominic Wade next) than the British star. Similarly Khan was in talks to fight domestic rival Kell Brook at 80,000 seat Wembley Stadium. Only in last week’s Boxing News guest column, Khan discussed Brook or rematching his previous conqueror and now WBC welterweight champion Danny Garcia. He didn’t breathe a word of this.

No one (beyond the parties involved) saw this coming. Canelo is the leading light of Oscar De La Hoya’s Golden Boy stable, a promotional outfit Khan parted from to box in Premier Boxing Champions in his last contest. Not to mention that this is a middleweight world title fight. Khan only recently moved up from super-lightweight and has never fought for a world title at 147lbs. At least this is made at 155lbs, so essentially pitting a welterweight against a big super-welterweight.

But Alvarez will be much bigger on fight night, you can tell from his broad back and serious punch power that he is a strong man at this, his preferred weight. For Khan it might be something of a struggle to put on the extra poundage without becoming sluggish. And for Khan speed will be key. It was his raw hand speed and high work rate that made him an exciting potential opponent for Floyd Mayweather. Maybe Amir remembers Mayweather clearly outpointing Canelo and believes he can do the same.

But the Briton is not a Mayweather-esque defensive genius. He has been tagged and hurt before. If Danny Garcia can take him out surely the destructive force of Alvarez will blitz him? There is a logic to that argument. If Alvarez clips him and wobbles him, the seasoned Mexican is a ruthless finisher and is unlikely to let Amir off the hook, and it would be hard for Khan to avoid every power punch over 12 rounds with Canelo. Remember just how cleverly Saul used his right cross against the brilliant Miguel Cotto.

Nevertheless Khan could pose him problems. He is a talent, he was beating men at the Olympic Games when he was just a teenager. I think Alvarez’s hands are relatively quick, though not as fast Khan’s, but he’s not the quickest on his feet. Canelo must be a clear favourite but Khan might just be backing his own mobility and speed to make this a difficult fight for the Mexican.

The Briton could be making a calculated risk. If the big fight against Kell Brook would still have been there for him if he had fought with and lost to Floyd Mayweather or Manny Pacquiao. Similarly a loss to the third biggest name in boxing, in (technically) a weight class two divisions above him, ought still to leave him in the market for major fights at welterweight.

But make no bones about it. This is a profoundly dangerous fight for Amir Khan, he should be saluted for taking it. It may yet prove foolhardy, but it is undoubtedly brave.