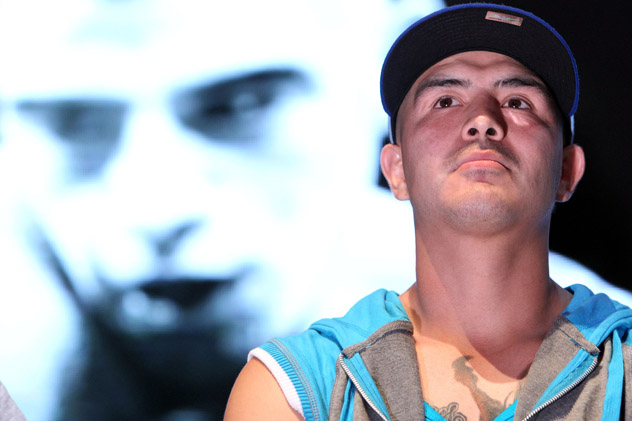 THE ever-entertaining Brandon Rios has promised to produce his old sparkle as he battles Diego Chaves in a ‘do or die’ contest this Saturday night.

Welterweight star Rios takes on the big-hitting Argentine Chaves this weekend, live and exclusive on BoxNation, and has vowed to get back to winning ways as he looks to bounce back from two defeats on the trot against Manny Pacquiao and Mike Alvarado.

“We’re just going to give the fans what they want. They’re going to see a nice little war in the ring as long as it lasts and it’s going to be a tremendous fight,” said Rios.

“I know he has tremendous skill and punching power, but I have punching power too. And I do have some skills, kind of. But we’re ready 100 per cent.

“I know this is a do or die fight for me, so I’m going to make it a ‘do’ instead of a ‘die’ and the fans are going to see the old “Bam Bam” back,” Rios declared.

The 28-year-old, who burst to prominence when he won the WBA lightweight world title in 2011 against Miguel Acosta, has seen his career take a dip following the two losses to Pacquiao and Alvarado in 2013.

However, the Oxnard native thinks his laidback lifestyle contributed to his poor campaign last year, as he vows to prove those who have written him off wrong.

“It is going to be a better year for me. I’m ready and well prepared. I have already put those two losses into the past. I’m looking to rejuvenate myself now. I got caught up in too much stuff and got comfortable too quick,” said Rios.

“I’ve moved forward and have forgotten about the past, it’s all about the future for me now. Everyone thinks I’m done – they think I’ve been in too many wars. I’m ready to win this fight.

Rios is renowned for his unrelenting and come-forward style that always has fans on the edge of their seat, but in Chaves he faces a fighter who will prove no pushover.

The Argentine has only lost once in his 23-fight career, that being a defeat to rising superstar Keith Thurman.

Despite his impressive 19 knockouts, Rios is unfazed at stepping in with Chaves and won’t be reining in his fan-friendly approach against the Buenos Aires banger.

“I promised my trainer I’m going to do everything right and that’s what I have been doing and you’ll see that on Saturday night,” Rios said.