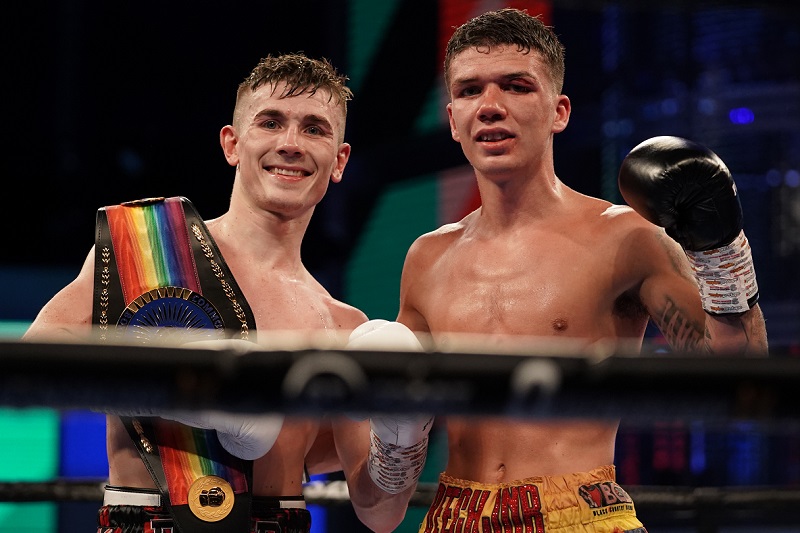 THE ring seemed smaller than usual, somehow. Without a crowd there was no place to hide, no cheers or jeers to mask a swing and a miss. All that was masked were the officials and the trainers and the working ringsiders. And the fighters – conditioned to feed off the energy a live audience provides – could draw only on that smattering of masked men for encouragement.

With all that in mind, both Brad Foster and James Beech Jnr are to be commended for going about their business so efficiently. For 36 minutes, in this brave new world orchestrated by promoter Frank Warren, they were laid bare and exposed. Every grunt and groan and thwack of the leather gloves could be heard. Intensely claustrophobic, yet so pure in its form, the pace was unrelenting throughout.

British and Commonwealth super-bantamweight champion Foster deserved his victory and the handsome Lonsdale Belt he won outright – a feat achieved only the 13 times in the last 10 years – was an appropriate reward for his unanimous 12-round victory.  The scores in this Marcus McDonnell-officiated bout were 117-111 twice and 116-113.

Those early rounds were close yet Foster’s industry, as he switched stances and raided his opponent with ripping blows, nicked the advantage. Beech was cut in the fourth from what appeared a left hand and in the seventh blood was drawn from his nose with a hefty straight right. But Beech had plenty of success himself. In the seventh, Beech measured Foster perfectly – recognising the feint and switch to southpaw his opponent was employing to get close – with a crisp right hook.

Foster was cut in the eighth but drew strength as he wiped the wound and recognised the trickle of red on his white glove. Energised, he formed short chopping blows and clever twos and threes that punished Beech in close. The champion, even in the 12th and final round, zigged and zagged his way inside and hurt Beech with left hooks and uppercuts to the body and head. A right hand followed and Beech, so courageous, drew on the last of himself to survive.

Indeed, it was in the closing stages – rounds 11 and 12 in particular – when Foster proved his superiority. At the end, the faces of the boxers told an accurate story of those championship rounds: Foster’s laceration was barely visible while Beech’s cut had widened and his lip grotesquely swollen.

Beech can come again but it’s Foster, arguably the quickest learner in British boxing, who has all the ingredients required to go far.

Hamzah Sheeraz, probing and poking his jab, cleverly manoeuvred Paul Kean to the ropes in the opening 90 seconds before holding his gloves high and inviting his opponent to try his luck. The Ilford prospect – belying not only his 21 years but the fact the death of his dear auntie to Covid hampered his preparation – then struck with his right hand as Kean, carelessly throwing his own right while dropping his left, fell into the trap. Dundee’s Kean hit the canvas under the weight of the educated attack. More stunned than hurt, Kean beat Howard Foster’s count but the problems facing the Scot were apparent.

“Normally, I’d knock someone down and you’d hear the crowd roar,” Sheeraz admitted afterwards. “But I didn’t hear that. I didn’t rush and I knew it was just a flash knockdown.”

The spidery Sheeraz has been working with Colin McMillan and the intelligence the former WBO featherweight champion has in abundance is a trait shared by the welterweight. Boxing smartly throughout, Sheeraz did not waste a single shot and countered beautifully. The pressure from Hamzah steadily increased without too much energy being exerted and Kean, despite switching stance and doing everything he could to be effective, was largely restricted to throwing singles.

By the end of the fourth – arguably Kean’s best but still a stretch to give him even a share of it – the underdog’s nose was spewing blood. In the fifth, Sheeraz went to work again, the left hook to the body followed by an uppercut up top with the same hand was particularly effective in teeing up the right cross.

Even when faced with a bloodied and bedraggled opponent, Sheeraz would not be hurried. His jab gored Kean further in the sixth as the fight became a thrashing. Power was injected into the Sheeraz right hand and as one splatted into the nose of Keane, the Londoner’s corner – vocal throughout – applauded while saying “lovely work!”

But the opposite corner, headed by Paul Kean Snr, had seen quite enough. With victory out of reach and the pummelling only set to intensify, the wise decision was made to pull Kean out. Simply, Sheeraz was in a different league throughout and has a future to be very excited about.

“That was a 10 out of 10 performance,” said David Haye – working alongside Paul Dempsey in the studio – about Sheeraz. “Anyone who says that isn’t 10 out of 10 doesn’t know what they’re talking about.”

One of Haye’s former sparring partners, David Adeleye, was another showing promise on the undercard. Those in the sport have known about the Ladbroke Grove heavyweight, who has also shared a training ring with Tyson Fury and Anthony Joshua, for several years. Now Tipton’s Matt Gordon knows all about him too.

The Midlander, only 23, was greeted with Adeleye’s forehead being pressed on his own during the introductions before getting a taste of the starlet’s left hook to the body approximately a minute in. Gordon, a southpaw and a former MMA campaigner, showed ambition and in turn became an inviting target. He was tagged several times in the opening round and the attacks – see also, audible thuds – increased in the second.

Now trained by Frank Greaves, Adeleye was in seek and destroy mode. He was trying a little too hard at times but the looping blows raided his prey. With Gordon in the corner, a left and right smashed through his defence and sent him to the deck. Referee Michael Alexander made the right call to stop it at 2-44.

Sidcup-based Ukrainian Dorian Krasmaru – who boxes out of the Peacock Gym and regularly spars Daniel Dubois – was forced to go the distance for the first time in his burgeoning professional career against Swindon’s wily Phil Williams.

Any ambition the journeyman may have had was socked out of him in the second round when a short left hand landed high on his head. After that obvious wobble, the bout went to script and was little more than a glorified sparring session which did not excite. Krasmaru showed off his repertoire of blows while Williams kept his guard high and his survival instincts close. No prizes for guessing the 40-36 scoreline tabled by referee Alexander at the end of a drab encounter.

Stu Greener, after being introduced by master of ceremonies Craig Stephens, made a little bit of history by being the first fighter to appear in a British ring since March. “Little Canelo”, though, was out of his depth against impressive Portsmouth southpaw, Mark Chamberlain, who in turn became the first post-lockdown winner.

Significantly taller, Chamberlain scored with a left hook to the jaw then went downstairs when Greener’s defence instinctively rose, before switching up again and hammering another left hook over the guard that rocked head backwards. Unable to stop the onslaught, Devizes’ Greener went down, managed to get up, but was duly pulled out by Mr Alexander following a subsequent attack. It was all over after 55 seconds.