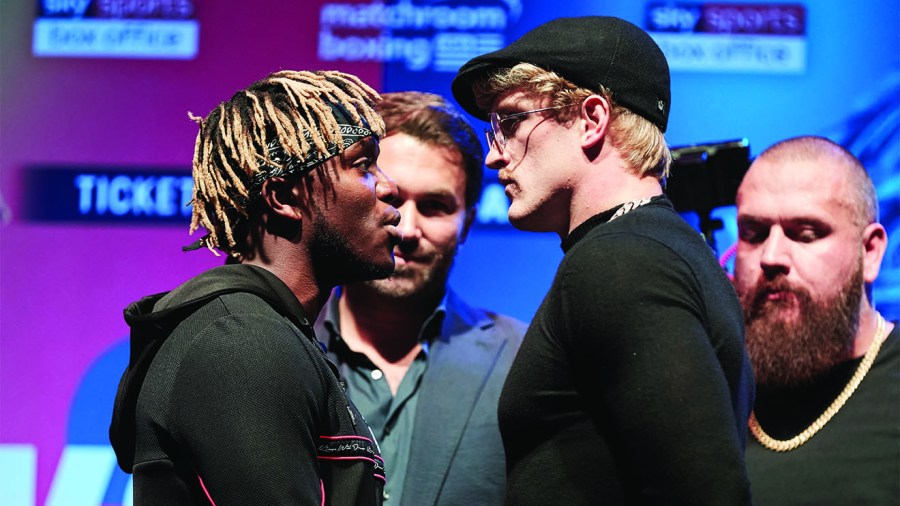 Although boxing has long been the home of the weird and the wonderful, 2019 suggests things are only getting stranger

Amir Khan sharing a ring with Billy Dib in July, in Saudi Arabia of all places, was as ridiculous as any fight made this year, yet was nearly topped for bizarreness by a chief support contest that night between Hughie Fury and Samuel Peter, which should have been aborted the moment the idea was conceived.

Khan defeated Dib, of course, and seems to have a new audience to exploit at a late stage in his career, but the Middle East experiment left all who had to sit through it feeling cold and confused.

18. Froch and Groves kiss and make up

The beauty of the Carl Froch vs. George Groves rivalry in 2013 and 2014 was that it seemed fuelled by some genuine, intense and bankable hatred. This elevated the importance of two fights and ensured every pre-fight meeting between the pair fizzed with energy and the prospect of some pushing and pulling.

Froch settled things with a right hand at Wembley Stadium in May ’14, but even then, with the argument over, it was hard to foresee the two sharing pundit duties and doing dinner shows together five years later. That they did is somehow both heartening and disappointing.

Hot prospect Ryan Garcia ruffled feathers when he turned down Romero Duno and Petr Petrov as late replacements for Avery Sparrow, who was arrested the day before he was due to fight Garcia on September 14. He then called out Golden Boy Promotions for putting him in an awkward position, claiming he was being taken advantage of and “set up”, only to days later agree a new deal with the company. He labelled it “one of the most lucrative boxing deals for a prospect in the history of the sport” and during the signing of the contract managed to produce a smile even wider than that of Oscar De La Hoya, his relieved promoter.

Shortly after Amir Khan swatted Billy Dib away in Saudi Arabia, he arranged a press call to discuss his next move and announced that a fight with Manny Pacquiao had been secured for Saudi Arabia on November 8. Not long after that, however, Pacquiao issued a counter to this and shot down any suggestion a Khan fight was in the works.

Though the right call, it was still strange to see Sulaiman translate Martinez’s victory speech for a UK audience and then immediately wipe the smile from the Mexican’s face by announcing the belt was going to back to its original owner due to a mistimed finishing punch.

14. Spong’s cougar escapes and his urine comes back dirty

Tyrone Spong was a name unfamiliar to boxing fans last year. Known only in kickboxing circles, Spong seemed hellbent on changing this in 2019.

‘The King of the Ring’ first hit the news when his pet cougar escaped his Florida home (for which he was charged with keeping an animal without a permit) and then failed a Voluntary Anti-Doping Agency (VADA) drug test just days before he was due to fight former cruiserweight king Oleksandr Usyk in October. It’s not known if Spong and his cougar share medication but, according to Spong, the failed test for clomiphene was a “set up”. He has yet to explain how.

Boxing’s obsession with titles has made an already confusing sport almost impossible to follow and confusion suits those seeking to benefit from it.

Case in point: Tyson Fury’s two-and-a-half-year hiatus from the sport after dethroning Wladimir Klitschko in 2015 saw him lose his belts and then turn the lineal heavyweight title – his one remaining ‘title’ – into something it’s not upon his return. He now argues this title – one lacking a sanctioning body, rankings or an actual belt – usurps the WBA, WBC, IBF and WBO versions out there yet will contradict himself by ‘defending’ it against the likes of Tom Schwarz and Otto Wallin in 2019. The latter defence had the added bonus of a WBC Mayan title on the line, by the way. Your guess is as good as mine.

His detractors will say Tyson Fury has been one-part lineal heavyweight champion and one-part pro wrestler since his return to the ring in June 2018, but he fully embraced the role of heel in September and October, when acting out a storyline with fellow bearded big man Braun Strowman.

Whatever your stance on Fury or the WWE, it was a promotional masterstroke, exposing ‘The Gypsy King’ to a new audience and serving as an unofficial job interview for a second career once his boxing career is over. Strange and silly, no question, but also one of the shrewder moves witnessed in boxing this year.

After being stopped in the eighth round of an IBF super-featherweight eliminator, Azinga Fuzile accused the assistant trainer of his opponent, Shavkatdzhon Rakhimov, of using smelling salts on his fighter’s nostrils between rounds seven and eight of the pair’s fight in East London, South Africa. They were used, he said, to rejuvenate the Russian and video evidence seemed to substantiate his claim.

The plot then thickened the following Tuesday when Nomfesane Nyathela of Rumble Africa Promotions discovered a collection of drugs and medical equipment in Rakhimov’s East London hotel room. Rakhimov’s manager, Aleksey Titov, said the bottles belonged to him and were there to help him recover from the flu in preparation for a marathon. But this one, like Titov, could run for a while.

The adage ‘once bitten, twice shy’ is one critics have attempted to apply to David Price ever since he was beaten for the first time by Tony Thompson in 2013. But this year Price was actually bitten on the chest by a frustrated Kash Ali in the fifth round of a heavyweight fight and left with the teeth marks to prove it.

Interestingly, too, Price, having been bitten, went on to produce one of the best performances of his career (against Dave Allen in July), showing no signs of shyness.

In August, Curtis Harper was disqualified for exiting a ring at the Minneapolis Armory in Minnesota seconds after the opening bell of a six-round fight against former Olympian Efe Ajagba. The moment aired live on Fox Sports 1 and then went viral.

Some believed Harper quit because he was scared to fight, but the ballsiest man in the building later revealed he had in fact walked out of the fight in protest of his $6,000 purse (an amount agreed, he said, for an off-TV fight).

It would have been tough to believe had there not been photo evidence, and had it happened to anyone other than Carl Frampton, but an August 10 fight against Emmanuel Dominguez was scrapped when an ornament fell on the Irishman’s hand.

It wasn’t the first funky injury to scupper one of Frampton’s fights at the 11th hour (Andrés Gutiérrez famously cut himself falling over in the shower the night before he was set to face Frampton in 2017) and the incident was a reminder to us all that some fighters truly are never safer than when they are in a boxing ring.

James Ali Bashir, a Kronk legend and former assistant to Emanuel Steward, sadly became embroiled in a heated argument with relatives of Claressa Shields the day before his boxer, Ivana Habazin, was due to fight Shields in a middleweight title fight. Moments later, in walked Shields’ brother, Artis Mack, and Bashir was left in a heap on the floor, coldcocked by Mack when he wasn’t looking. The fight was called off and Bashir was rushed to hospital for facial reconstruction surgery.

Boxing had a taste of the #MeToo movement in March when heavyweight Kubrat Pulev got a little overexcited in the aftermath of a seventh-round stoppage of Bogdan Dinu and foolishly kissed a female reporter, Jennifer Ravalo of Vegas Sports Daily, on camera.

Pulev’s claim that the pair were friends didn’t wash with Ravalo, who hired women’s rights attorney Gloria Allred and issued a series of accusations against the Bulgarian. But it was Pulev who possessed the trump card: a video of Ravalo performing lap dances for members of his team at an after-fight party. If they weren’t friends, they were at least previously acquainted.

It wasn’t Jarrell Miller failing a drug test that was unusual. He had previous. He had knowledge. He had the look. Instead, what made ‘Big Baby’s flunked test for the banned substance GW1516 laughable was the fact it followed Miller casting himself as the unlikeliest of anti-drug activists ahead of an ill-fated June 1 heavyweight title shot against Anthony Joshua. Not content with that, he then accused Joshua, his opponent, of benefiting from testosterone usage exemptions since he turned professional.

A clever ploy, if only to deceive and deflect, it ultimately backfired and made Miller look foolish once everybody’s suspicions were confirmed and a new opponent was needed.

4. Whyte cooks up a storm

Because nobody is allowed to discuss what happened in the days leading up to Dillian Whyte’s July 20 fight against Oscar Rivas, let’s instead divert attention away from that by mentioning the fact he competed in BBC 1’s MasterChef and finished in fourth place. At least that way we can pretend everything surrounding Whyte vs. Rivas was perfectly normal and delude ourselves into thinking ‘The Body Snatcher’ is now merely taking time out to further improve his cooking skills.

Nigel Benn’s planned return to boxing after 23 years away was met with concern, ridicule and disappointment from all but those eager to monetise the situation. Even Conor Benn, his son, pleaded with him not to do it and forced his father to confirm he would be one and gone (again) at the announcement press conference. Just as telling that day was the presence of BIBA (British and Irish Boxing Authority), with whom Benn is licenced, and the tears in the former world champion’s eyes when he stressed he needed to make this comeback not for money but for peace.

In the end, none of it mattered as an injury helped ‘The Dark Destroyer’ see the light.

Andy Ruiz Jnr, the underdog of all underdogs, borrowed Anthony Joshua’s belts for some pre-fight photo opportunities and then ripped them away from him on fight night. He was laughed at. He was mocked. He was described by Tyson Fury as the chubby kid from Up. But on June 1 in New York, Ruiz, a replacement for original opponent Jarrell Miller, proved he’s hungrier for success than food and that all that matters in the end is a fighter’s ability to fight.

The day boxing joined forces with two YouTubers, stuck them on pay-per-view, relegated professional champions to their undercard, and told the world, with a straight face, that it was a genius move for the sport and would attract a new audience was the day the levee broke. It made financial sense for a rich few but told the rest of the world that boxing is a sport anybody possessing two arms and two legs – and millions of followers – can do to a pro standard. It also highlighted the extent to which the product being delivered has been progressively dumbed down and has probably emerged, this monstrosity, as a trendsetter – the way forward – rather than one-off attraction.