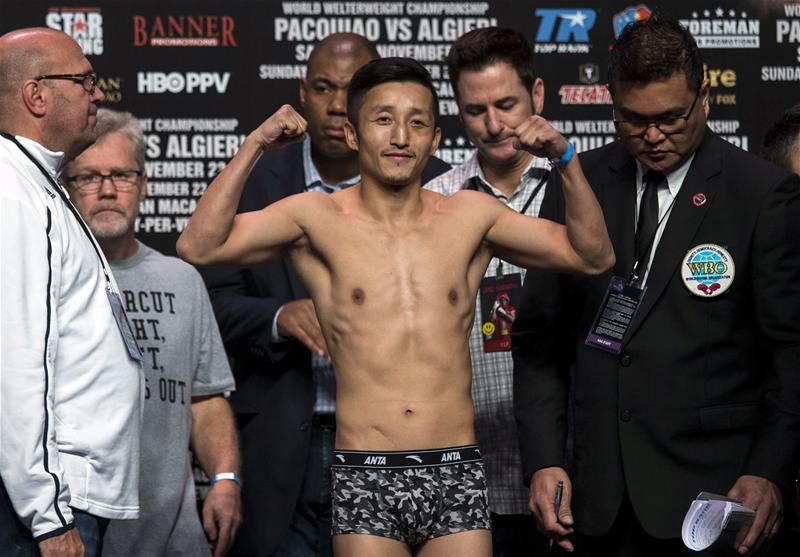 ZOU SHIMING started out with menacing intent against Kwanpichit Onesongchaigym, knocking down the Thai and showing power that the Chinese star, a two-time Olympic gold medallist, will need as a professional. Onesongchaigym dug in and started firing back hard punches. He handed Zou, who finished cut, with a swollen left eye, 12 hard rounds, which Shiming took by unanimous decision.

Local favourite KK Ng hurt Stephen Attard early on in their six rounder but when a cut opened on Ng’s forehead the New Zealander attacked more vigorously to close the contest. Ng however took the unanimous victory.

Hong Kong’s Rex Tso got drawn into a battle with Indonesia’s Espinos Sabu but eventually emerged with a wide unanimous decision after eight rounds.

To close the show Andrew Robinson turned over China’s Qu Peng. The New Zealander won their four rounder with a split decision.

TO READ MORE ON THE PACQUIAO-ALGIERI SHOW CLICK HERE

For the full Pacquiao-Algieri ringside report don’t miss next week’s issue of Boxing News, available via our app on iTunes and Google Play.
Subscribe to BOXING NEWS, established in 1909, and the longest running publication on the market. SAVE MONEY and GET THE BEST COVERAGE EVERY WEEK.