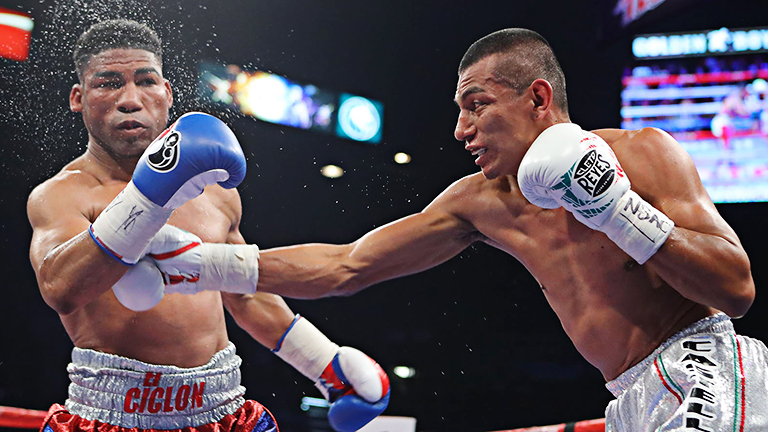 A STUNNED Yuriorkis Gamboa was subjected to a heavy knockdowns twice and then complete defeat as he stayed on his stool after seven rounds with Mexico’s Robinson Castellanos, declining to come out for the eighth.

Gamboa began relatively well, though his hands were slow and his judgement of distance was off. It went even further downhill from there. He unravelled. In the third round Castellanos smashed a tremendous right into his jaw, dropping the Cuban heavily. The bell saved him then from taking further punishment. But at the start of the fourth Robinson bowled a savage right into Gamboa’s jaw, putting him down a second time. The Mexican had almost an entire round to end it there and then, but he did not manage it.

In fact he seemingly tired and reduced his workrate to mostly single shots. That allowed Gamboa to rally, move on the back foot and land punches of his own. But Castellanos recovered himself, working the body, hooking hard punches to the head. He seized momentum them, grinding down Gamboa. The Cuban looked dazed and jaded and did not emerge from his corner for the eighth round.

“I felt super dizzy, and felt like I couldn’t go on,” Gamboa admitted, adding plaintively, “We trained hard.”

Victorious on Cinco de Mayo, Mexico’s Castellanos could celebrate an expected triumph. “I am super happy and excited to get such a big win,” said Castellanos. “I won against a revered Olympian, and this win puts my career back on track after my last fight. This win is the opportunity that I needed, and it’s because of the incredible team around me.”

Jesus Rojas was relentless, hitting Abraham Lopez whenever and wherever he could, occasionally below the belt and once or twice after the bell. But it was his constant pressure that did the damage, putting Lopez down as early as the second round, then in the fourth and the eighth. He battered Lopez with more brutal headshots until referee Tony Weeks finally halted it at 1-47 of the eighth.

For an Olympic bronze medallist, Yamaguchi Falcao is a surprisingly scrappy boxer. He often missed the target against Morgan Fitch and even punched himself off balance on one occasion, losing his footing and hitting the deck himself. Fitch had moments when he disrupted the Brazilian, driving in a stern right. But overall Falcao was in control, doubling his southpaw left with particular effect and making Fitch back off with a pained expression with mere jabs at times. He took a unanimous decision.

“It’s been five months since I’ve been in the ring from my last fight. I had a lot of trouble adjusting and finding my rhythm, “ said Falcao. “It’s a journey, and I’m glad I got the win, but if I want to reach my goal of fighting the big time fighters I have to improve everywhere.”

Texan prospect Vergil Ortiz sent Angel Sarinana flying with a tremendous right uppercut. Ortiz had set about the Mexican ferociously in the first round, hammering his body with right hooks, finding openings easily as he rammed his cross through the middle. Vergil took the second round off to catch his breath and Sariana rallied. But Ortiz subjected him to another bombardment in the next round, ending it at 1-44 of the third.