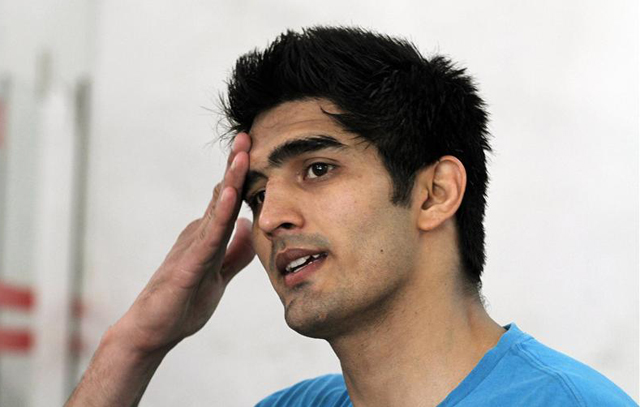 INDIA’S Vijender Singh – the Britain-based, Frank Warren-promoted super-middleweight prospect – returned home to a hero’s welcome and notched the most impressive scalp of his professional career, when he unanimously outpointed former European champion, Kerry Hope, over 10 rounds. Singh’s fans were packed inside the Thyagaraj Stadium and were delighted when their idol was declared the victor via scores of 100-90, and two tallies of 98-92.

As expected Hope, a comparative veteran of 30 fights who had won three on the bounce going in, was far from a pushover and made life testing for Singh with his southpaw stance. But an upset never looked likely as the revered favourite stepped inside to negate the Welshman’s favoured left hand, and scored with his right at the end of the first.

Trained by the excellent Lee Beard, Singh upped the pressure in the second session, stinging Hope with two right hands as the round came to a close.

The underdog refused to be overawed, though, and came back into the contest in the third – punishing Singh for his carelessness and perhaps over confidence. Hope also had a decent fourth, advancing with purpose, only to find himself cut under the eye and by the end of the fifth his trainer, Liam Williams, was roaring for him to hang tough under pressure from Singh.

Hope did just that, and continued to have sporadic success throughout the remainder of the bout, but it was Singh – particularly in the ninth when a long right buckled his rival’s knees – who bossed the action.

At the final bell, both fighters were held aloft by their trainers but only Singh’s claim of victory looked genuine.

Vijender Singh, who had never before been beyond the fifth, proved he could cope with the significant step up in class and can now boast a 7-0 (6) record, though perhaps the 30-year-old’s vaunted power is not quite as show-stopping as some predicted. Hope, 34, slips to 23-8 (7).