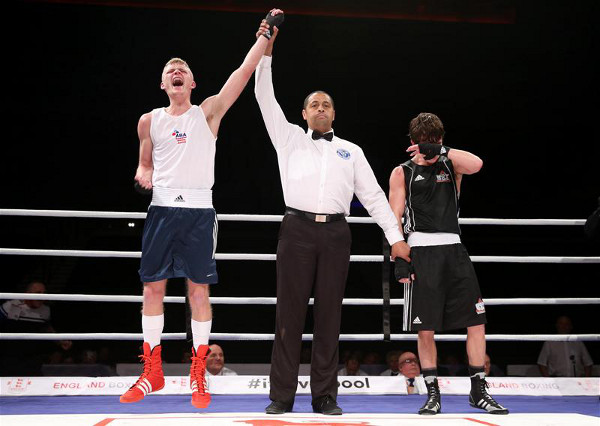 THE finals of the England Boxing Elite Championships took place at the Echo Arena in Liverpool on Sunday afternoon (April 26) and for the first time the women’s event was combined with the men’s.

Opening proceedings was the light-fly final, which saw Sunny Edwards move and counter well to upset number one seed Joe Maphosa on a unanimous decision. At flyweight Muhammed Ali was simply too strong for local southpaw Blane Hyland, who took a lot of punishment over the last two rounds but hung in there to lose unanimously.

A very close all-southpaw 56 kgs final went the way of Callum French, via unanimous decision over local Peter McGrail. French lost the first round but after a close second finished strongly to take the last and with it the title.

Birtley won the next two finals too, through the McCormack twins. Luke produced what few clean punches there were to beat Jack Wood in a scrappy lightweight bout before light-welter Pat outboxed southpaw Alfie Price in a battle of wits.

Super-heavyweight saw big Frazer Clarke finally win his first national title, although his points win over Natty Ngwenya was marred by too much holding from the soldier for it to be long remembered.