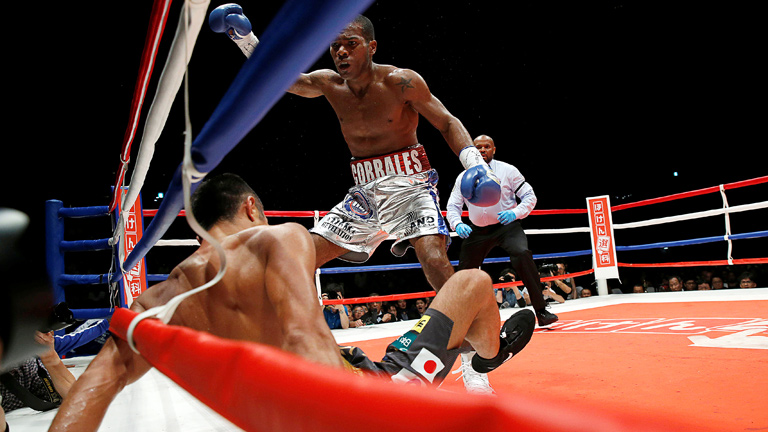 Takashi Uchiyama is knocked out in two rounds

TAKASHI UCHIYAMA had his WBA world super-featherweight title wrenched from his grasp earlier today as underdog Jezreel Corrales knocked him out in two rounds.

Uchiyama met the unfancied Panamanian in Tokyo, Japan to make the 12th straight defence of his WBA crown, only for Corrales to flatten him with a monstrous left hand.

The southpaw challenger had dropped Uchiyama twice before he uncorked the finishing shot, which prompted referee Robert Hoyle to end proceedings at 2-59 of round two.

The loss ends a six-year reign for Uchiyama, who has long been the world’s best at 130lbs having stopped the likes of Juan Carlos Salgado, Takashi Miura and Bryan Vasquez.

Corrales, 24, had been written off by most ahead of the fight given his limited level of opposition, and the fact he suffered his sole loss in his second outing as a professional.

He also struggled to make the weight, requiring several attempts on the scales at yesterday’s weigh-in to get under the limit. However he has now supplanted Uchiyama as the top dog at super-feather, an increasingly exciting division which will see former featherweight king Vasyl Lomachenko move up to, to fight WBO champion Roman Martinez later this year.

Kohei Kono retained his WBA super-flyweight bauble on the Tokyo bill with a unanimous decision over Thailand’s Inthanon Sithchamuang. Kono dropped the challenger in the fourth and fifth rounds before earning scores of 119-106 on all three cards to potentially set up a fight with mandatory challenger Kal Yafai.

WBA light-flyweight boss Ryoichi Taguchi kept hold of his belt by forcing Juan Jose Landaeta to retire after an 11 round drubbing.