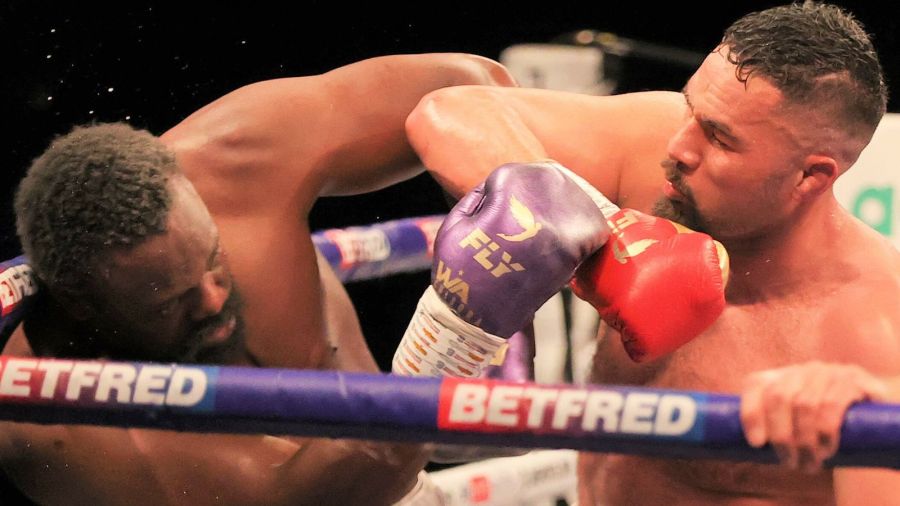 JOSEPH PARKER came to life in the second half of his 12-rounder with Derek Chisora inside the Manchester Arena to eke out a split decision victory. The 116-111 score for Parker was cruel on Chisora, who again gave everything. The two tallies of 115-113 for each fighter were more in keeping with the tight, tense and at times untidy bout.

Chisora made the fastest of starts, bowling over a right hand that dropped Parker – more off balance than hurt – inside the first eight seconds. The Auckland heavyweight was then tagged by a left hook midway through the opener as the veteran went for the early finish. But Parker, the pre-fight favourite, eased into proceedings with a minute of the round to go as he bounced on his feet and let his hands go for the first time. It seemed to take Chisora by surprise.

After an untidy second round, Chisora was threatening in the third. That overarm right clattered into Parker who, aside from the odd flash of class, was being caught frequently by those thrashing blows so typical of the Londoner in recent years.

The pattern continued in the fourth; Parker moved backwards and to the side, and occasionally hopped up and down, while Chisora dutifully chugged after him. The lack of variety from Chisora should have made it an easier task for the New Zealander but the 37-year-old was always dangerous.

Parker was better in the fifth and sixth, his faster hands becoming more active. But his failure to hold his position and attack Chisora allowed the underdog to fight at his own pace.

But Chisora was punished in the eighth. The Aucklander planted his feet and sent a left-right into the head of his rival. With 30 seconds left in the round Parker – for the first time – put everything into his shots and Chisora looked to be in trouble.

Parker boxed well in the 10th, jabbing with purpose and following up with his right hand. The slicker combinations and better boxing was now coming from Parker.

“Come on boy, you don’t hurt me,” Chisora said in the 11th. Parker may not have been hurting him but he was certainly hitting him. Buddy McGirt, Chisora’s latest coach, screamed at Chisora to wake up in the 12th and chase the fight. But it was Parker who stepped it up and seemed to hurt his opponent with a right hook and, as it turned out, pull the fight out of the bag.

Katie Taylor retained her world lightweight title after a terrific tussle with old amateur rival, Natasha Jonas. It was hard fought all the way with Jonas digging deep to hurt Taylor on more than occasion. But the Irish superstar’s excellent work through the middle and workrate that won her the fight in the end. But it was so close as the scores of 96-95 (twice) and 96-94 testified.

Taylor didn’t land anything of note in the opening round as Jonas’ high guard, clamped to her forehead, . The favourite was more menacing in the second round, threatening to break through the middle before Jonas – boxing intelligently – took the third.

The fourth round was more of the same. Taylor blazing through the middle with Jonas trying to gain control from distance. Taylor was tagged by a left in the sixth and Jonas had more success in the seventh. There were thrilling exchanges down the stretch as Taylor increased the pressure.

“Again, it was probably a bit too exciting for my liking,” said Taylor afterwards. “I thought I was bit flat early on but I dug deep in the championship rounds. I definitely showed the heart of a champion in there and that’s what won me the fight in the end.”

Dmitry Bivol retained his WBA light-heavyweight title with a unanimous decision victory over Craig Richards. The challenger’s trainer, Peter Sims, threw his water bottle on the floor in disgust after the decision – unanimous via scores of 118-110, 115-113 and 115-114 – was announced.

But in truth, the close cards seemed kind to Richards. Though he was at times the busier, it was Bivol who was always the more accurate. Crucially, the Russian’s defence was on point and he blocked many of Richards’ blows.

In the opening round, Richards boxed well, doubling his jab, but was stung by a left hook. Bivol seemed to be waiting to land his right hand which was always cocked and ready.

That power arm threatened in the second but Richards stung Bivol with his own right in the third. But the Russian’s jab couldn’t miss. He didn’t waste a single shot and seemed comfortable throughout.

Chris Eubank Jr – with Roy Jones Jr in his corner for the first time – won a unanimous 10-round decision (three scores of 98-92) over the brave Marcus Morrison.

Eubank Jr was patient. His sister, sitting ringside, screamed at him in the second round: ‘What are you waiting for?’ Big bro then unleashed a right hand that jarred Morrison. The underdog found himself pinned in a corner but was not in serious trouble.

Morrison caught Eubank with a right in the third. Momentarily it bothered the 1/50 favourite before he invited Morrison to try it again.

The underdog, in fairness, was doing better than many expected but Eubank was enjoying himself. In the fifth he exploded into action, drawing blood from his rivals nose.

The beating intensified in the sixth. Morrison’s face was swelling and, as Eubank pounded his ribs before hooking him upstairs, the Mancunian’s trainer, Joe Gallagher, seemed to think about calling it off at the end of the session. But he was never really in trouble again as Eubank coasted to victory.

There was disaster for James Tennyson early on as he was stopped in the opening round by Mexican Jovanni Straffon. After a wild start, in which Tennyson caught Straffon several times, the unfancied southpaw broke through with a left that floored his rival. Tennyson was done but was given a chance to survive. But at 2-10, the bout was stopped.

Scott Fitzgerald, last seen in a ring back in October 2019 when he outpointed Ted Cheeseman, opened the evening with a three-round thumping of Gregory Trenel. The Preston boxer strayed low, earning Trenel a breather in the third, but Fitzgerald soon had his opponent in trouble. On the ropes and taking too many, referee Steve Gray stepped in at 2-43.