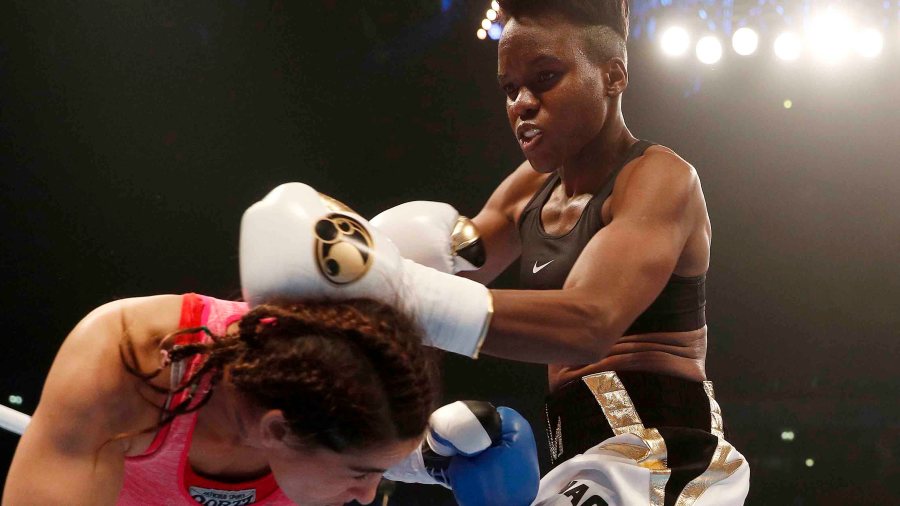 NICOLA ADAMS sailed through her professional debut with a shut-out 40-36 points win over Virginia Carcamo of Argentina at the Manchester Arena on Saturday night.

Billed as ‘The Lioness’, the double Olympic champion swiftly adapted to her new surroundings with a sharp and commanding performance against a clearly outclassed opponent.

Adams’ promoter Frank Warren is convinced his latest protege has what it takes to win a world title right now and has already announced her second fight for her home city of Leeds next month.

Adams’ debut display offered no evidence to the contrary as she looks to build on her history-making progress in the amateur ranks by becoming a professional world champion.

Since becoming the first female boxer to win an Olympic title at London 2012, Adams has always dreamed big and is not likely to remain content with four-round undercard bouts for long.

She has talked about her ambition of headlining a show in Las Vegas and is at the vanguard of the dramatic rise in popularity of women’s boxing in the wake of the Rio Olympics.

Adams’ fellow two-time Olympic champion Claressa Shields has already paved the way by topping a major show in the United States while Ireland’s Katie Taylor is four bouts in to her professional career.

It is a far cry from the days in 1998 when Jane Crouch won a legal battle with the British Boxing Board of Control to earn women the right to fight, only to be quickly forced abroad in search of better opportunities.

By a strange coincidence, the referee for Adams’ first professional bout, Steve Gray, was also from Fleetwood, but was never likely to struggle to collate his scorecard following the swift four rounds of action that followed.

Without a head-guard for the first time and clad in a bright white gown, Adams made her way to the ring to respectful applause in contrast to the cascades of cheers – or in some cases boos – which have greeted previous Olympians.

Carcamo, fighting out of her native Argentina for the first time, certainly seemed undaunted by the occasion and the first round was relatively even as Adams grew used to her new situation.

Cheered on by her partner Marlen Esparza, another Olympian to have recently turned professional, at ringside, Adams looked much sharper in the second round as she landed swiftly and accurately with both hands.

In a better third, a superb long left clearly hurt the Argentinian, but to Carcamo’s credit she came back for more and never looked in any danger of succumbing to defeat before the final bell.

Adams admitted her desire to impress had led to a scrappy opening period but expressed delight that her long-awaited professional career was finally underway.

Adams said: “I absolutely enjoyed every minute of it. I was a bit too eager to try and get the stoppage tonight because I wanted to entertain the crowd – but the girl was quite tough.

“It was a lot better (than amateur). You can see more without the head-guard. It doesn’t affect your vision so much so that’s good – I loved it.”