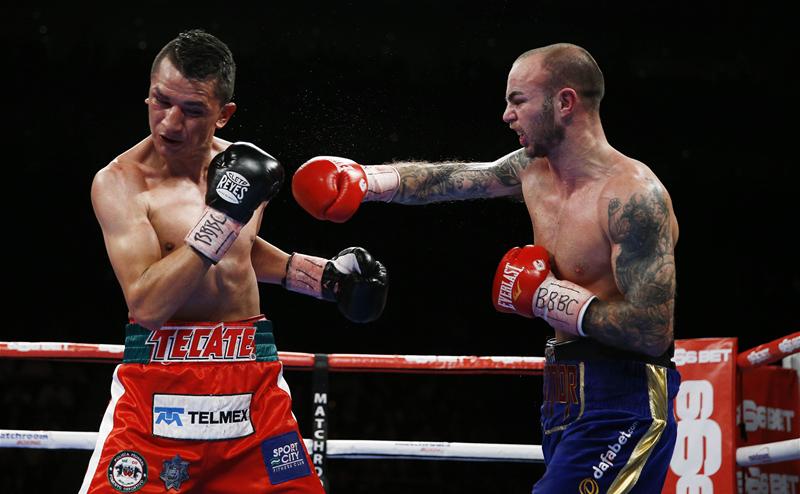 KEVIN MITCHELL was sharp, focused and dangerous, as he selected punishing shot after punishing shot to hammer Mexico’s Daniel Estrada. The Mexican struggled to land cleanly and Mitchell tore into him with real venom to leave Estrada out on his feet for a stoppage in the eighth round.

“I felt like I showed my class in there,” Kevin said. “It is the best performance of my career. I’m maturing now.”

Mitchell wins a WBC Silver title and hopes this victory will put him in line to challenge WBC lightweight champion Jorge Linares later this year.

John Wayne Hibbert versus Tyler Goodjohn did deliver the promised excitement. Hefty rights hurt Goodjohn initially but, cut by the eye and marking up, he bravely pressed on. Eventually Hibbert broke him down, wobbled him and prompted the referee to halt it in the eighth round.

John Ryder uncorked a massive southpaw left to flatten Billi Godoy in 10. He needed it, the preceding rounds, marred by holding, had not caught fire.

Tommy Martin is the new English light-welterweight champion after 10 fast and furious rounds with Ricky Boylan. Martin caught Boylan in the opening rounds but Ricky stood up to the shots, came forward and shook him at times. Martin however landed more frequently, backing off behind his jab. It looked close but the judges scored a wide unanimous decision in Tommy’s favour.

GB flyweight Charlie Edwards got a precious stoppage victory on his pro debut against Craig Derbyshire. Edwards caught the Doncaster man with a fast straight right, clipping his chin and knocking him down. He charged into Derbyshire, letting fast hands fly and the referee intervened with only six seconds left in the four rounder.

Heavy-hitter Ohara Davies struck down and halted Lee Gibbons with a big right hand inside half a round to claim another stoppage victory.

Journeyman Moses Matovu was in surviving mood against Isaac Chamberlain. Isaac, making his pro debut, showed flashes of power but Matovu leapt into clinches, scuttled away out of range to lose the four-rounder 40-36.

Ryan Toms can count himself highly unlucky to have only been given a 57-57 draw after six rounds with Ben Hall. He had Hall visibly reeling at times as he teed off with southpaw lefts, though game Hall refused to fall and hacked back at him with his own shots.

Lee Markham, as expected, was much too big for Lewis Van Poetsch, hitting him at will, picking apart his defences and stopping  Van Poetsch inside two rounds. Markham will fight Jahmaine Smyle for the English super-middleweight title next.

FOR THE FULL RINGSIDE REPORT AND MUCH MORE FROM KEVIN MITCHELL DON’T MISS NEXT WEEK’S ISSUE OF BOXING NEWS.