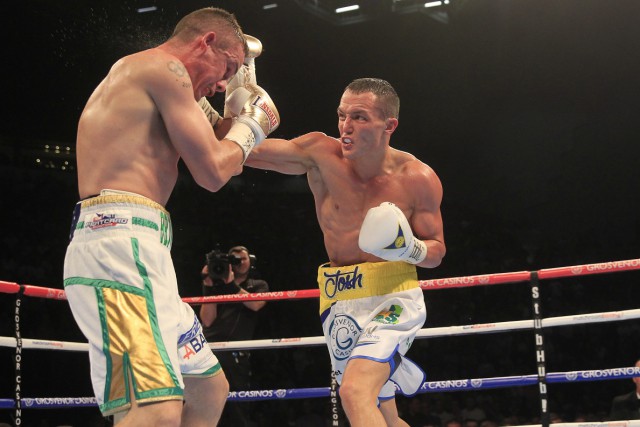 Warrington picks up a wide points win over Brunker

FEATHERWEIGHT Josh Warrington shut out Australia’s Joel Brunker at the First Direct Arena in his Leeds hometown, winning 120-108 on all three judges’ cards to defend the Commonwealth title.

“It was my biggest test,” said Warrington. “I wanted to listen to my cornermen tonight and that is what I did. It was about showing that I could box for 12 rounds. I did have him wobbled a couple of times and I am happy with the performance.

“Last time, with the size of the crowd, I got carried away and was trying too hard to blast him out. Tonight I knew he was a dangerous guy so I wanted to take my time and stick to my boxing.

“Joel is a world-class performer with a brilliant record and you know you can’t come in at 99 per cent, you have to be 100 per cent switched on.

“I listen to my team and Eddie [Hearn] and Steve [Wood] and I will box whoever they put in front of me. I know what the crowd want and I have to take every fight as it comes and it is all working towards that big world title fight against Lee Selby at Elland Road.”

After the fight Brunker tweeted: “He was the better man and fully deserved the win.

“Thanks to everyone who supported me. It means the world. I gave it all I had but just wasn’t good enough.”