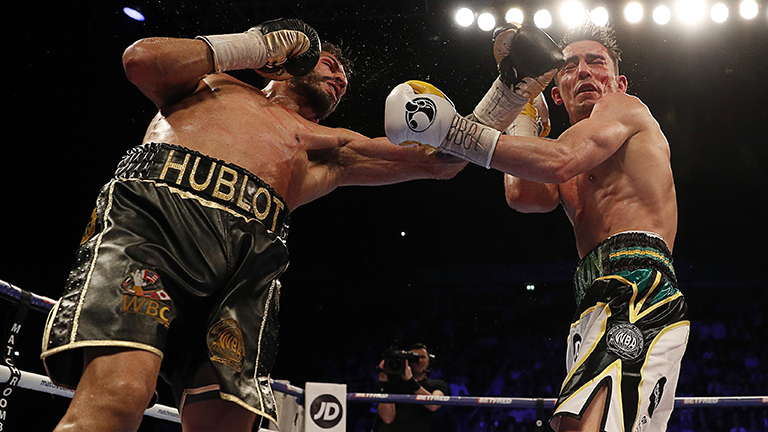 Jorge Linares will now be ordered to fight Mikey Garcia

JORGE LINARES tightened his grip on the lightweight division with a rousing 12 round decision over Anthony Crolla at the Manchester Arena earlier tonight.

Linares was defending the WBA lightweight title he had won from Crolla last year.

Though not at full capacity, the Manchester Arena was rocking by the time the two protagonists made their way to the ring, with Linares’ promoter Oscar De La Hoya also watching at ringside.

Though they’d already shared 12 rounds with each other, the opening stanza was hardly round 13 as both men analysed the minor tweaks and improvements the other had made since they met last September. Linares landed a swift left uppercut but Crolla managed to find a home for one of his signature left hooks to the body.

Crolla, boxing behind his usual high guard, forced Linares to work more in the second but the champion was happy to oblige, feinting with a half-jab before slotting a full one into Crolla’s mid-section numerous times. His unpredictable variety makes him a nightmare to fight.

Linares oozed class in the third, prying Crolla’s arms apart with a jab before jarring his head backward with a perfectly-timed right uppercut. Crolla would not be denied, but Linares merely grinned at him.

Crolla closed the distance well in the fourth and snapped Linares’ head back with his ramrod jab. The champion’s fluid work looked mesmerising, but Crolla caught a lot of the shots on his arms.

Linares showed glimpses of the rather dizzy levels he can reach in the fifth, tagging Crolla with some cutting shots. The Mancunian, who never lacks for bravery, would not relent though.

Things only got worse for the challenger in the sixth as a cut opened over his left eye and the replays proved it came from a straight right hand.

A looping left uppercut dropped Crolla in the seventh and he was in bad trouble. The vastly experienced Linares moved in and hammered him on the ropes but Crolla rallied back and survived the round.

Crolla, whose reserves are apparently endless, came on strong in the eighth as Linares’ work rate dipped slightly – Jorge was particularly gun shy with his right hand, which has been riddled with injuries in the past.

The ninth was terrific. Crolla, now in top gear, pressured a seemingly tired Linares and landed some solid shots. The champion kept landing punishing uppercuts though and another one from his left hand forced Crolla to back off.

Crolla’s forward momentum slowed slightly in the 10th and his punch output was low, allowing Linares some recovery time and by this stage it was clear the hometown hero needed a knockout to win.

The cut above Crolla’s eye continued to seep in the 11th as Linares rediscovered his rhythm and landed some spiteful right hands.

Crolla continued to force the pace in the final stanza but he could just not pin down the classy champion, who had once again brought his best to Manchester. They embraced at the final bell and Linares was awarded scores of 118-109 three times.