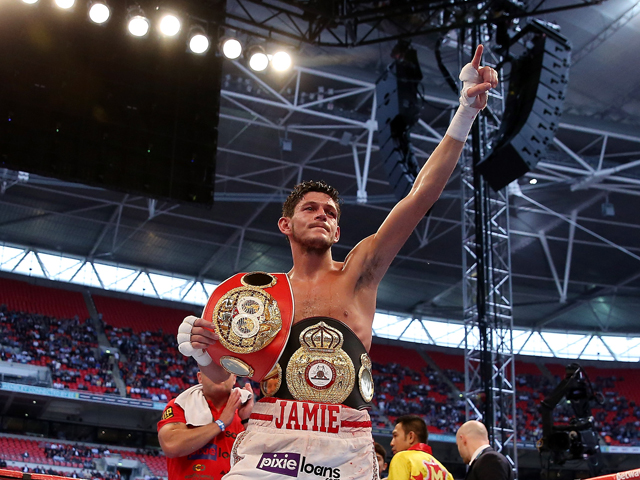 JAMIE MCDONNELL emerged from a heavy knockdown to score the biggest win of his career when he defeated Tomoki Kameda via close unanimous decision in Hidalgo, Texas. The Englishman’s hopes appeared shattered when a crunching overhand right from the favourite decked him in round three, but he rallied – and dominated the crucial 12th session – to retain his WBA ‘world’ bantamweight title via three scores of 114-113. But there was no American cheer for Ricky Burns when his brave comeback was thwarted by Omar Figueroa.

McDonnell – without aerophobic trainer Dave Hulley – has been out in Texas with manager-come-replacement-trainer Dave Coldwell and preparing diligently for his previously unbeaten opponent.

In a gruelling and always engrossing barnburner, McDonnell overcame Kameda – now 31-1 (19) – with admirable tenacity and a refusal to submit; at times in the contest it looked like the skilful Japanese fighter was on the brink of domination. But McDonnell would not be denied, altered his approach during battle, and did enough to impress the judges, if not the pro-Kameda crowd.

“This is the big league that Jamie is in now and there’s no turning back from here,” Coldwell reported the day before the fight. “This is where he wants to be and this is where I want him to be. He’s at the top table now. A big show in America against a brilliant name and the rewards for victory are set to be huge. The hard work has been done and Jamie is in a fantastic place ahead of what is a brilliant matchup between two quality fighters who are likely to meet head on. The fans are definitely going to be entertained in this one and I’m so sure that Jamie McDonnell’s name is one that they’ll be talking about afterwards.”

With this victory McDonnell – who was infamously stripped of his IBF title in 2013 – has a lucrative future. It’s understood the Doncaster man was handsomely paid for this expedition, and planned to pay off his mortgage, but it’s the exposure this victory garnered in the States (live on CBS) that will open the biggest doors.  In the UK, though, fans were left outraged as Sky broadcast heavyweight prospect Anthony Joshua administer his latest thrashing instead.

However, British fans were treated to live coverage of Ricky Burns‘ admirable effort to upset Omar Figueroa. The Scot – widely written off after a series of high-profile setbacks – fell short on the cards after 12 hectic rounds losing unanimously 116-110 (twice) and 117-109.

Burns – not helped by two point deductions nor some questionable officiating – proved life remains in his tattooed body by pushing Figueroa much closer than the cards suggested. The former WBO super-featherweight and lightweight boss had previously been consigned to the scrapheap after two difficult years.

Losses to Terence Crawford and Dejan Zlaticinan in 2014, and a costly legal wrangle with former promoter Frank Warren, screwed up the fairytale Burns had been composing since unexpectedly gatecrashing the world scene in 2010. Figueroa was expected to bin Burns’ top flight career but this was his best performance in years.

SEE WHY BOXING NEWS – established in 1909 – GOT IT RIGHT AGAIN