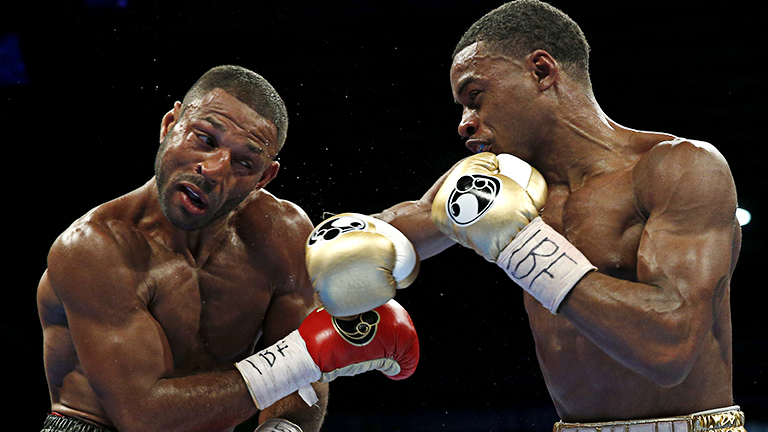 SHEFFIELD’S Kell Brook had his IBF welterweight title taken from him in his hometown in front of a packed house inside Bramall Lane stadium. Touted Texan Errol Spence maintained his unbeaten record by forcing Brook out in the 11th round. However, the defending titlist showed immense courage to even make it that far, having suffered significant damage to his left eye in the eighth.

Prior to Brook having his eye swollen almost shut, the fight had been extremely close. Both boxers displayed their fast, accurate jabs, as well as their impressive defensive movement. Straight shots and hooks were regularly exchanged to the body, with each session being keenly contested and difficult to score.

With the two men even on my scorecard heading into the ninth, Spence gained the ascendancy in that frame, as the welt on Brook’s left eye first became apparent. In the next stanza, a series of strikes from Spence led Kell to crumble to the canvas by the ropes. Brook bravely battled back, as the two competitors swapped punches, much to the vociferous crowd’s approval.

Spence continued to target Brook’s grotesquely swollen optic in the 11th. After dabbing at the injured area with his glove, Brook was forced to take a knee. With his vision badly impaired, the Englishman could no longer continue, leading the referee to wave the bout off at 1-47 of the round.

Brave Brook was defiant until the end, but ultimately this was Spence’s night, as the American proved that he is the real deal by travelling to his opponent’s backyard to take the title.