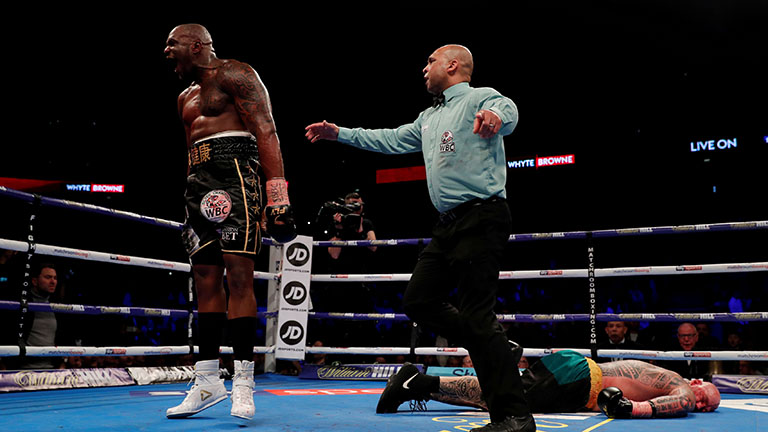 A MONSTROUS left hook from Dillian Whyte saw off Lucas Browne after 37 seconds of the sixth round in their heavyweight grudge match at the O2 Arena in Greenwich.

The devastating finish led to wild celebrations from an ecstatic Whyte. However, the Jamaica-born Londoner soon reined in his revelry when it became apparent that Browne was in some distress.

Thankfully, after receiving oxygen from ringside medics, the Australian left the ring on his own accord, before being taken on a stretcher – lying conscious – to the backstage area. The Sydney man was then driven to the Royal London Hospital as a precaution.

The definitive ending capped a fine performance from Whyte, who largely dominated every round with his long jab and powerful combinations to both head and body.

Browne suffered a nasty cut on his left eye as early as the second session, and the wound worsened with every bludgeoning blow from Whyte, leaving the visitor’s face a bloody mask by the conclusion of the contest.

After the bout, Whyte – who is the No. 1-ranked challenger in the WBC heavyweight ratings – called out that organisation’s champion, American star Deontay Wilder.

“Deontay Wilder – where you at? Let’s go! Let’s do this! June at the O2! Let’s go!” Whyte hollered. “I’m going to lay out all of these guys one by one. If Wilder fights anyone else before me, I’m going to go to America and kick off. I just love to fight. I walked away when I landed that left hook tonight. I knew it was over straight away.”