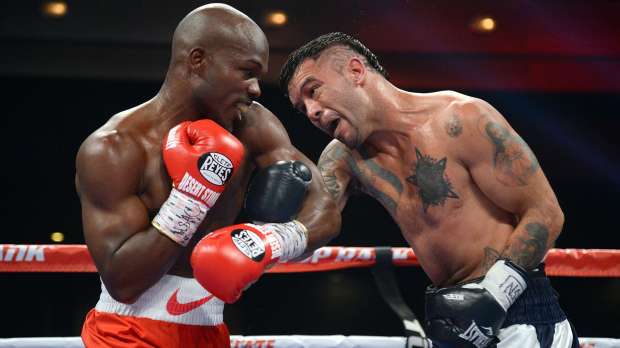 “I THOUGHT I won at least eight rounds,” said a shocked Timothy Bradley after the judges declared his 12-round welterweight war with Diego Chaves a draw at The Cosmopolitan in Las Vegas.

The American, looking to rebound from an April loss to Manny Pacquiao, started fast and bowled in an overhand right that gained power in flight. It thudded off Chaves’ face but his body stayed upright. It was a punch Bradley had fun with all night.

The pair were exchanging from the third round and it became a thrilling spectacle. Even so, Bradley seemed to be doing enough.

“I listened to my corner to try and close the gap on him,” Bradley said. “Try and wear him down a little bit. That’s why I step inside, to smother him. I was just trying to get to his body and slow him down. I moved back to the outside because he was slowing down. Then I could land counters on him.”

Bradley landed a low blow in the 11th for which Chaves was given time to get his breath back, and the favourite went on the attack again in the final round, seemingly securing victory bu finishing strong.

After the bout, Bradley expressed his willingness to engage in a sequel, but also indicated a move to light-middleweight could be the next stop.

What happened at The MGM Grand?