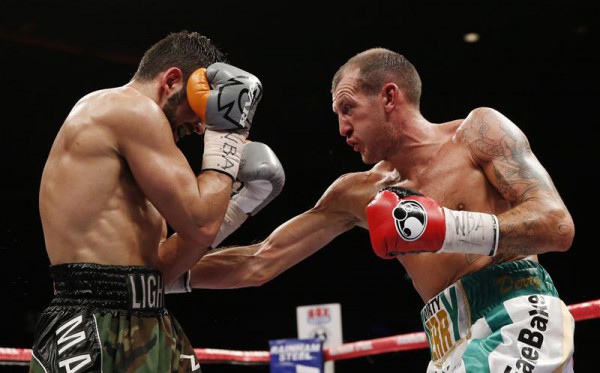 DERRY MATHEWS ended a tumultuous week on a high, outscoring persistent Canadian Tony Luis over 12 gruelling and engrossing rounds in Liverpool on Saturday for the vacant WBA Interim lightweight title.
After full champion Richar Abril withdrew from this Echo Arena bill, on which he was due to defend against local hero Mathews, dangerous Venezuelan southpaw Ismael Barroso was substituted in then rapidly back out when he was unable to secure a visa. Barroso’s promoter Greg Cohen swapped Ismael with his other fighter Luis, who pressured Mathews diligently throughout.
Luis, who found out about the match on Monday and arrived in the UK two days later, was in training for a bout the previous evening and it showed. Often forcing Mathews to ropes and into corners, the Canadian unloaded sapping body blows and uppercuts in a contest that saw both men suffer one-point deductions.
Mathews was the superior technician and excelled at distance, a luxury he was rarely afforded. His long, straight blows were enough to secure a unanimous decision, 114-112 (twice) and 115-112.
Also on the card, hometown British light-middleweight champion Liam Smith captured the vacant WBO Inter-Continental belt by grinding down tough but overmatched Argentine David Romero, scoring four knockdowns on the way to a seventh-session win.
Another local light-middle, Joe Selkirk, broke his oft-injured right hand early on but halted Spaniard Yuri Pompilio in the sixth with left hooks.
Motherwell flyweight Iain Butcher stayed busy with a 59-56 six-round points victory over Brett Fidoe of Fenton. Butcher saw his vacant British title bout with Luke Wilton fall through earlier in the week.