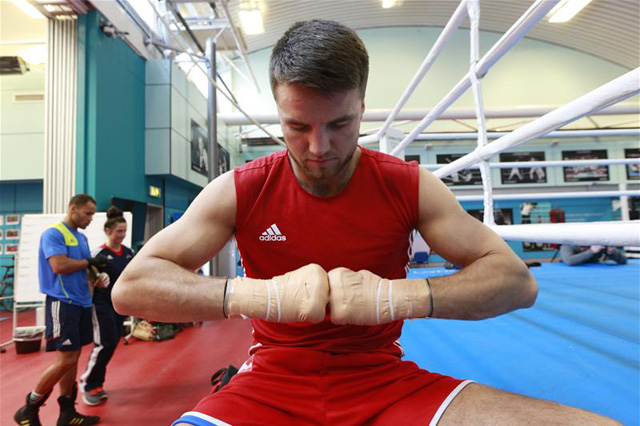 John Dennen provides the latest updates from the SECC

India’s star Vijender Singh is through to the middleweight final too after unanimously outpointing Northern Ireland’s Connor Coyle.

Samir El-Mais, the Canadian who eliminated Warren Baister from the Games, is into the 91kgs final with a unanimous win over Nigeria’s Efetobor Apochi. New Zealander David Light joins him in the heavyweight final after claiming a points decision, for all three judges, over Scotland’s Stephen Lavelle.

Steven Donnelly’s tournament came to an end in the semi-final. He will have to make do with a Commonwealth Games welterweight bronze medal after conceding a split decision to India’s Mandeep Jangra. Scott Fitzgerald advanced to the 69kgs after delivering some classy work against South Africa’s tall, rangy Tulani Mbenge. The English welterweight won unanimously on points.

Despite Joe Cordina’s good start in the first round, Scotland’s Charlie Flynn forced his way in close to rough up the Welsh lightweight  and pocketed a split decision points win. Northern Ireland’s Joe Fitzpatrick will meet Flynn in the final. He beat Trinidad and Tobago 60kgs Michael Alexander unanimously.

For a light-flyweight India’s Devendro Laishram can punch hard. He floored brave Welshman Ashley Williams in the second round and made sure of a unanimous decision victory in their 49kgs semi-final. He’ll have a cracking final with Paddy Barnes, who cruised past Uganda’s Fazil Juma Kaggwa, a straightforward unanimous win for the man from Northern Ireland.

World champion Savannah Marshall outscored Nigeria’s Edith Ogoke. The English middleweight’s jab and movement round the ring soon put her in control. Ogoke ran out of ideas and lost unanimously.

Australia’s Shelley Watts, the conqueror of Natasha Jonas, powered into Northern Ireland’s Alanna Audley-Murphy to win unanimously, 40-36 on all three cards. In the other 60kgs semi-final Maria Machongua did well to last four rounds beneath the sustained assault of India’s Laishram Devi, who won unanimously. Watts-Devi will be a war in the final.

English super-heavyweight Joe Joyce is through to the final of the Commonwealth Games, enjoying a walkover in the semi-final after Uganda’s Mike Sekabembe failed his medical.

“It’s a case of mixed feelings about the walkover. I wanted to box but it’s great that I have got the silver medal and a place in the final so I cannot complain,” Joe said. “I am in great shape and am feeling very good at the moment. I always work hard in training and leave no stone unturned so I will be going into the fight in very good condition. If you work hard in training you get the benefit when you box.”

Australia’s Joseph Goodhall took a unanimous decision over Nigeria’s Efe Ajagba in a slow-paced semi-final and so will meet Joyce in the 91&kgs final on Saturday (August 2).

New Zealand light-heavyweight David Nyika picked his shots well against game Sean McGlinchy, outscoring the man from Northern Ireland unanimously. Kennedy St. Pierre, from Mauritius, clattered Wales’ Nathan Thorley, pounding out a stoppage victory in the third round of the other 81kgs semi-final.

Just as Michael Conlan’s 56kgs clash with Welshman Sean McGoldrick was opening up their heads collided. Northern Ireland’s Conlan was badly cut, the bout was stopped in the second round and Michael won the decision. But Conlan will need the injury to hold together for tomorrow’s final.

Reece McFadden’s incredible run in this competition came to an end against Australia’s Andrew Moloney, who pipped the Scot on a split decision in their 52kgs semi-final. But McFadden has a Commonwealth Games bronze meda and scalped GB talents Andrew Selby and Charlie Edwards in preliminary bouts.

Pakistan flyweight Muhammad Waseem won every round for each judge to win his semi-final with Ghana’s Abdul Omar.