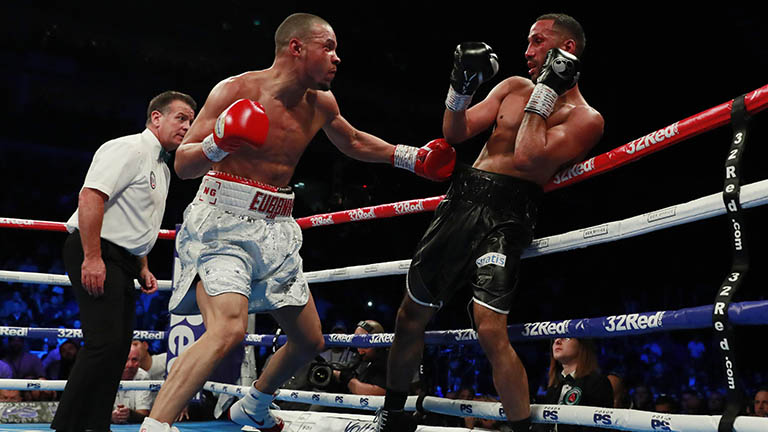 CHRIS EUBANK Jr has left James DeGale facing retirement after securing the finest victory of his career via a unanimous decision in their IBO Super Middleweight title match in London.

He had previously lost his two biggest fights, against Billy Joe Saunders and George Groves, but improved sufficiently to win an occasion DeGale said would force the loser to retire.

At 29 and with so high a profile there was little risk of that for Eubank Jr, but after his third defeat and a career in which he became the first British Olympic gold medallist to win a world title DeGale  — the loser by scores of 114-112, 115-112 and 117-109 —  has been left with few lucrative options to pursue.

The key was always likely to be whether DeGale retained enough of the abilities that once made him the IBF super-middleweight champion, which he both won and defended outside of his home city and in the US.

Until his bruising and damaging draw with Badou Jack he was sufficiently skilled and mobile to beat Eubank Jr, a natural middleweight, with ease but since then — in a defeat and then an unconvincing victory over Caleb Truax — he has struggled.

Even as the naturally smaller fighter there was every chance Eubank Jr possessed the physical — if not technical — advantages to impose himself.

It had been a year since he had lost so convincingly to Groves, owing largely to his size disadvantage and technical flaws, that in preparation for DeGale he had hired a new trainer in the little-known Nate Vasquez.

Following a cagey opener, Eubank Jnr hurt DeGale with a powerful left hook in the second that sent him into the ropes, and he followed up with a hurtful barrage that forced referee Michael Alexander to administer an eight count.

He was under similar threat at the start of the third, following a right hook that knocked him back, but after easing the pressure on himself and regaining his composure, he boxed with greater confidence in the fourth and fifth, landing with sharp jabs and evading the hooks his rival threw.

It was when DeGale began to move that Eubank Jr began to look clumsy, swinging and missing with the type of punches that would test his conditioning, but for all that the older fighter’s defence often impressed, he was again guilty of throwing too little in return.

Eubank Jr remained a constant danger, disrupting DeGale with his aggression and maintaining the superior work-rate without being discouraged when he missed or was caught.

Another right landed towards the end of the eighth demonstrated that dominance, and a big 10th ultimately proved enough to secure victory. A left hook after they exchanged rights wobbled DeGale, before another barrage sent him to the canvas again.

If DeGale was already so far behind he required a knockout, he was given a lifeline when Eubank Jr was deducted a point for throwing him down in the 11th.

But in the 12th he did too little to win while also again being hurt, putting the result beyond doubt.