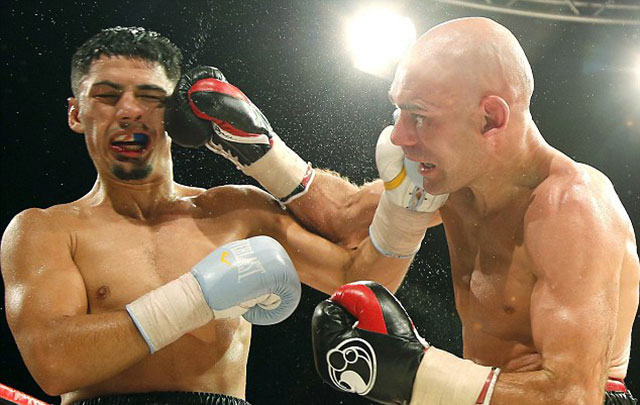 STUART HALL’S admirable attempt to regain the IBF bantamweight title ended in failure as he was outscored by unbeaten American Randy Caballero in Monaco. The 24-year-old claimed the vacant belt after a hard-fought 12 rounder was judged unanimously in his favour; two scores of 116-111 and a tally of 118-110 handing him victory.

The Brit briefly hit the canvas in round two – a sharp straight left stealing his balance – and fought back to make the bout a pleasing spectacle. Both combatants exchanged powerful blows but the younger man’s class told in the end.

Hall was ultimately outgunned, but certainly had his moments in the thrilling showdown. However, he landed a savage blow below the belt in the fifth, and appeared in danger of being overwhelmed before staging a rally over the second half of the bout. Even then, Caballero – 10 years Hall’s junior – retained control and was a worthy winner.

Hall, 16-4-2 (7), is now without a win in three outings, having lost this title to Paul Butler in June and being held to a technical draw by Martin Ward before that. Caballero boasts a spotless 22-0 (13) ledger.

The rugged St Helens scrapper won a technical decision after seven rounds – the premature finish caused by a head-clash that opened up Spada’s skin. The incident occurred in round three and Murray lost a point before the injury worsened further over the next four rounds.

Spada was outraged at the verdict – 67-66, 69-67 and 68-63 – and certainly made life uncomfortable in the early going. Murray remained calm during the opening rounds and appeared to take over in round four. However, it was not a performance that would have worried the fearsome Golovkin, who watched on from ringside.

The Kazak is expected to welcome Murray’s challenge in the same Monte Carlo ring on February 21, 2015.