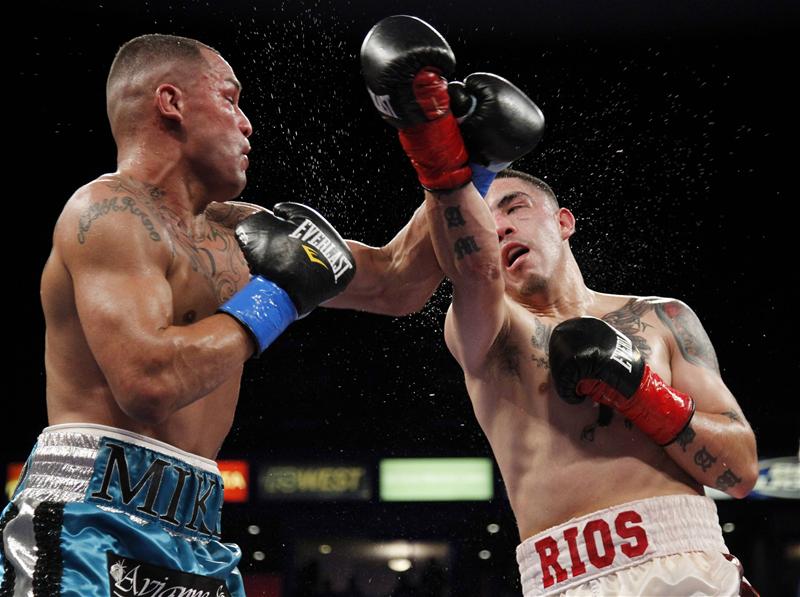 Mike Alvarado and Brandon Rios have already engaged in two thrilling wars, with one win a piece. They meet in Colorado, Alvarado’s home state to settle their series decisively. You can still download this week’s issue of Boxing News for the full preview (and much more besides, including a feature on boxing’s greatest forgotten trilogies) from our app on iTunes, Google Play or via www.pocketmags.co.uk.

Refresh the page for updates below.

On the undercard at the 1stBank Center Aik Shakhnazaryan versus Abner Lopez is underway.

Shakhnazaryan may be the shorter man, but he clips the Mexican with hard power shots to close the second round.

Lopez suddenly comes on strong in the third, whipping a hook into Shaknazaryan’s body and worrying him with blows to the head.

Lopez hurts him to the body and the Russian has to back off. Momentum is turning Abner’s way.

To start the fifth round, Lopez charges out flinging punches, trying to make the most of his advantage.

A hard left to the body drops Shaknazaryan to his knees. Lopez strikes him down a second time and hammers at the Russian.

Shaknazaryan swings back gamely with a hook, fighting forward to keep himself in the bout. He makes it through the round.

Lopez swarms over him, staying southpaw to drill the Russian’s body with heavy lefts. Shaknazaryan has to manoeuver away from his tormentor and attack off the back foot.

Lopez has won the crowd as they chant his name.

Shaknazaryan slings in a right and the two trade punches as the bell rings to end the eighth and final round.

Let us know who you’re picking to win the main event and how. You can tweet @boxingnewsjd.

The next fight should be interesting. Gilberto Ramirez, from Mazatlan, Sinaloa, Mexico, is highly rated with a gleaming 30-0 (24) record. He’s someone James DeGale has been looking at as a potential foe as the Briton plots a course towards a world title. Ramirez’s opponent tonight is Maxim Vlasov is 30-1 (15). The Russian’s only loss came against Isaac Chilemba in 2011. Here we go…

Neither made a breakthrough in the first round, Ramirez, a southpaw, advanced, squaring up at times, but landing little of note. Vlasov looked sharp with clusters of lighter punches.

Brandon Rios is dancing in the changing room. Ready to rumba… (Forgive me).

Ramirez showing a decent jab and directs his straight left to the body. He clips Vlasov’s ribs with a right hook to the body, a bid to slow him down on his feet.

Vlasov jerks himself bodily away, a sign he’s starting to feel the weight of those punches. After the first four rounds Ramirez is starting to take over.

The referee warns Ramirez to stop his shots straying below the belt.

We’re into the sixth round and Vlasov is starting to perk up.

It’s still hard for Vlasov to get round Ramirez’s further-reaching combinations, though  retreating Maxim weaves his body clear as Gilberto comes forward.

The Russian sneaks in an uppercut in close and lashes in a right, forcing Ramirez momentarily on to the back foot.

Vlasov holds his ground more in the ninth round, both look like they’re flagging as they get caught up clinches. Gilberto’s hooks and uppercuts cleave round Maxim’s guard.

In the 10th and last round Vlasov strafes Ramirez with punches as the Mexican tries to break free from the attack.

Rios is bounding in towards the ring. He seems spritely.

Alvarado circles as jabs flick out between them. Rios rushes him at times, catching him with uppercuts. Rios opens up on him and looks dangerous.

Alvarado needs to find a way to keep Rios off him. A cracking right hook hurts Alvarado. Three straight punches land, a hard uppercut too. He hits him with a right. But Alvarado hits Rios a blatant low blow and Brandon drops to the canvas. Mike gets a breather.

But war breaks out early as Rios continues to go at him in the second round.

Rios looks more dynamic with faster hands. Alvarado ties him up. All does not look right with Alvarado, as Brandon merrily goes to work. Alvarado goes down to a knee. Just makes it up as the referee counts to eight.

Alvarado swings back at him, just to stay in the fight at the end of the third round. Rios is dominant.

Alvarado can’t answer the bell for the fourth round. The fight is over. Rios roars to celebrate. “I’m back,” he shouts to the crowd.

Rios did look relentless, fast and powerful. But with legal troubles looming over him, you have to wonder how well Alvarado’s preparations had gone, what his mental state was in the fight and how much the wars of his career have taken out of him.

“I listened to my corner. I put pride aside,” Rios declares. “Whatever he did, I was practising for and I came out victorious. That was the performance I want. I’m still young in the sport. This is a new me right now. This is a new ‘Bam Bam’. I don’t care who it is, I just want to get back to the top.”

In a distressed, confusing post-fight interview, Alvarado says he suffered an eye injury at some point in the fight. But he seemed adamant that he would box again.

For the full ringside report don’t miss next week’s issue of Boxing News (which also include a special feature on middleweight destroyer Gennady Golovkin).