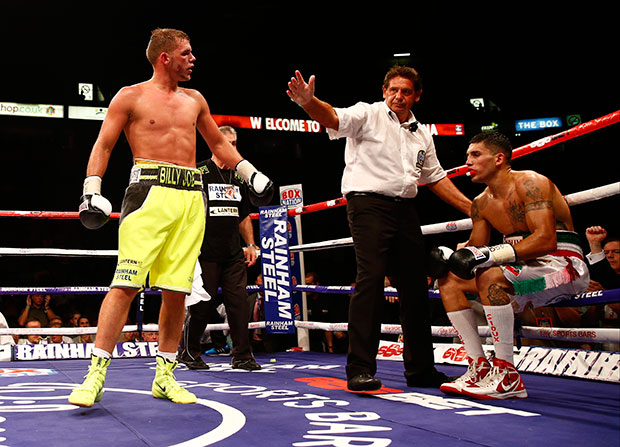 There is also wins for Liam Smith, Terry Flannagan, and Liam Williams in Manchester

WITH the pressure very much on, Hatfield traveller Billy Joe Saunders answered any lingering doubts about his punch power, a pulverising right hook in round eight effectively ending the night of tenacious and awkward Italian, Emanuele Blandamura. That right hook in essence secured the vacant European title in the Manchester Arena main even, spinning a ‘gone’ Blandamura into the ropes and certain defeat, but referee Robin Dolpierre muddied the waters with his ambiguous actions. He appeared to briefly grab Saunders’ shoulder to prevent a follow-up attack but Blandamura had not gone down. Following a few wholly unnecessary extra blows, Dolpierre signalled a stoppage and Saunders was crowned. He’d appeared ahead, having been elevated to a main event slot after first Dereck Chisora then Tyson Fury pulled out of the show, but Blandamura was persistent and landed his fair share while Billy Joe, returning from an injury-enforced hiatus, had gone off the boil after a sharp start. Post-fight, he called out Chris Eubank Jnr, who triumphed in a round on the undercard.

Also on the show, two British title fights ended badly for Errol Johnson’s Midlands camp. In a competitive battle for the vacant Lonsdale Belt at lightweight, former holder Martin Gethin was withdrawn by his corner at the end of the seventh round against unbeaten local Terry Flanagan, after the Walsall man’s right ear ballooned and was causing him immense pain.

The impressive Liam Smith of Liverpool retained his light-middleweight crown by despatching the determined and feisty Jason Welborn of Tividale with a crushing right hook to the body. Welborn, to an extent outclassed, took the full count on a knee. Smith could meet mandatory Nav Mansouri next but Welshman Liam Williams joined the queue for a title shot with a superb retirement victory over Ronnie Heffron.