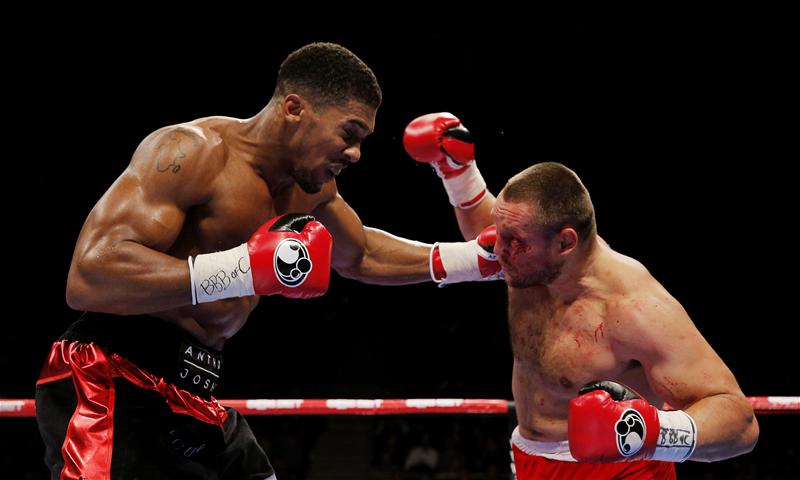 11.20pm: “It was scheduled for 10 rounds and it only went two so I’ve got to make up the rest.” Anthony Joshua has half an hour of padwork ahead of him after halting Russia’s Denis Bakhtov 1-00 into the second round. “We’re into phase two now so it’s time to step it up,” Joshua continued. “He’s not an easy opponent but I just wanted to make light work of him.

“I just wanted to hurt him.”

11.12pm: Denis Bakhtov did not fold beneath the heavy shots Anthony Joshua scorched through his guard in the first round. But he could only last into a minute of the second round as the weight the Olympic champion’s attacks clubbed him into the ropes. Referee Ian John Lewis hesitated but  pulled Joshua off his prey. The Watford man picks up the first belt of his professional career, a WBC international strap.

10.51pm: Prior to the fight Selby said this would be his acid test. “I passed it with flying colours and I’ll do just the same to [IBF champion] Evgeny Gradovich,” the Welshman declared. “I’ve had quite a bit of criticism so I thought I’d put on a bit of a show tonight… I had to prove I’m worthy to challenge for a world title.” Promoter Eddie Hearn reckons Selby could fight Gradovich next spring, assuming the champion successfully defends his title at the end of November against Jayson Velez.

10.48pm: Selby picked apart Brunker, until in the ninth round he added the finishing touches, ripping hooks into his body and hammering the Australian into the ropes to end it.

10.04pm: And now Lee Selby versus Joel Brunker in a final eliminator for the IBF featherweight title.

9.56pm: “I’ve had some real ups and downs,” said the delighted new English champion, Tyler Goodjohn. A deflated Boylan said, “When Tyler was moving I just couldn’t get my shots off… I’m gutted but that’s boxing.”

9.33pm: Goodjohn has hit Boylan with everything but Ricky finally clawed  back a round in the sixth.

9.12pm: Just as it looked like Boylan was getting into a rhythm, Goodjohn caught him with some massive head shots. Boylan could be in trouble here.

9.04pm:  Tyler Goodjohn versus Ricky Boylan for the English light-welterweight title is on now. This should perk the crowd up.

9.00pm: Into the fifth round and Tetteh gets a point deducted for a second time. Ryder lands a right hook and a jab and referee Richie Davies decides he’s had enough and waves it off.

8.48pm: A quiet start but Ryder’s lead right hook and then a backhand left hurt Tetteh in the second round.

8.31pm: John Ryder versus Theophilus Tetteh should be on in T-10 minutes.

8.25pm: David Price is on ringside punditry duty for Sky… What does this mean?

8.05pm: Ohara Davies has power but says, “I’m a smart fighter… I can hit hard, I’ve got speed but what me and my coach work on is technique.”

8.02pm: Ohara Davies scythes down Andy Harris with body shots at the the start of the second round. This prospect appears to be one to watch.

7.18pm: Although Martin was drilling Tew with good shots, marking him up, it looked like referee Ian John Lewis jumped in too soon when he stopped Tew 55 seconds into the seventh round.

7.06pm: Martin whips in hurtful shots in the fourth round.

6.48pm: And now a 10-round eliminator for the English light-welterweight title for Tommy Martin and Matty Tew.

6.45pm: A mighty left hook drops Bowes in the 10th and last round. Hughes sustains his attack and eventually Bowes’ corner pulls him out with 2-05 on the clock.

6.41pm: To compound Bowes’ misery he loses a point for holding in the ninth.

6.37pm: Hughes slams a straight right into Bowes, who sags into his tormentor. Philip survives and they go into the ninth round.

6.17pm: Joe Hughes cranks up the pressure on Philip Bowes as they go into the fourth round of their Southern Area light-welterweight title fight.

5.50pm: Erick Ochieng gets the evening at the O2 started with a four-round points win over William Warburton.