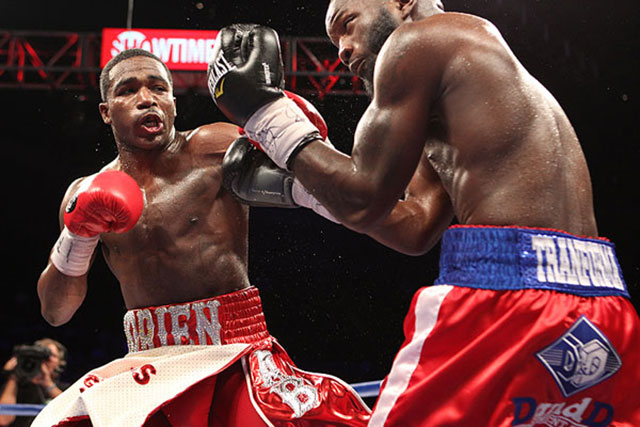 ADRIEN BRONER overcame a spirited Emanuel Taylor to claim a unanimous 12-round decision in the US Bank Arena in Cincinnati.

Broner’s claims of greatness were exposed last year when Marcos Maidana defeated him, and Taylor attempted to duplicate the Argentine’s success as he came out swinging from the opening bell. The pressure brought some success and after six rounds, it looked like an even fight.

The favourite had promised to knock Taylor out, and came on strong in the second half to secure victory when he dropped his opponent in the final session. A sweet left uppercut caused the knockdown, and it punctuated a thrilling toe-to-toe exchange. Two scores of 116-111 and one of 115-112 confirmed Broner’s superiority. The bout was an entertaining one, but Broner’s performance  – for the fourth fight in a row – fell some way short of his promises.

“There’s a lot of people who wouldn’t come here to Cincinnati to fight me, and he put up a helluva fight,” Broner said. “It’s guys like him who don’t get a chance to fight guys like me to show their talent, so I thank him for taking this fight.”

Broner then repeated his pre-fight desire to take on the dangerous Lucas Matthysse – who knocked out Roberto Ortiz on the same bill – in his next outing.

“My next fight should be Matthysse, and he can get it,” said Broner, who has won world titles at super-featherweight, lightweight and welterweight. “If it was up to me, I’d fight Matthysse tonight. I’ll beat his ass too.”

Matthysse welcomed the idea after halting Ortiz with a savage left to the body in the second round. The slugger would prefer a rematch with Danny Garcia, who decisioned him last year, but would relish the chance of shutting Broner’s mouth.

Ortiz, outgunned from the start, declared his desire for a return after the referee waved the bout off while the Mexican rose from the definitive knockdown. The underdog certainly got to his feet before the count of 10, but Matthysse’s dominance beforehand left few question marks about the finish.

“It feels great,” Berto said “[Trainer Virgil Hunter] made sure my jab is on point, making sure my boxing skills are on point. I’ve always had power. Always had speed. But he makes me stick to the boxing a little bit more. We’ll get better from here.

“I’ve been off for a while but everything fell into place pretty well. The shoulder feels good.”

FOR THE FULL REPORT, GET NEXT WEEK’S BOXING NEWS – available to download on Tuesday and in newsagents on Thursday.