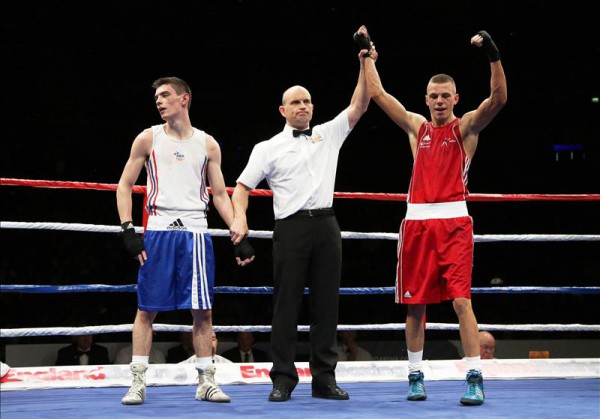 Daniel Herbert sees a shock upset and makes his predictions for the national finals
THE semi-finals of the England Boxing Elite Championships at Liverpool’s Echo Arena began brightly with some good performances in the lower weights. Joe Maphosa bested Andrew Winter in an excellent light-fly contest and now meets Sunny Edwards, who got past southpaw Galal Yafai in the other last four bout.At flyweight local southpaw Blane Hyland showed skill in outboxing soldier Shamin Khan while Muhammed Ali outlanded gutsy Louie Lynn to join him in the final.Bantamweight threw up an interesting decider with southpaws Peter McGrail and Callum French both winning their semis on points. Skilled McGrail beat Chris Bourke while tall French had too much for stocky Marcel Braithwaite.

Luke McCormack’s cut left eye reopened against Adam Cope but the GB boxer took the win on points. Luke’s finals opponent will be Jack Wood, who beat Ryan Fillingham in a scrappy affair.

Twin Pat McCormack (both box for Birtley) made the light-welter decider by beating Darren Richardson in a cagey battle, while in the other 64 semis southpaw Alfie Price had too much skill for Daniel Wright.

The day’s first stoppage came at middleweight when Troy Williamson hit too hard for Ryszard Lewicki stopping him in round two. Also into the final is Jack Flatley, a unanimous victor over Dan Woledge in a bout that saw both men cut.

At light-heavyweight Joshua Buatsi was too strong for Bryce Goodridge and now meets Ashley Vanzie, who outworked southpaw Matthew Tinker in a punch-up.

Frazer Clarke continued his pursuit of the super-heavyweight title with a hard-fought win over Joshua Quailey and now in the final meets Natty Ngwenya, who outlasted Declan Fusco in a gruelling encounter.