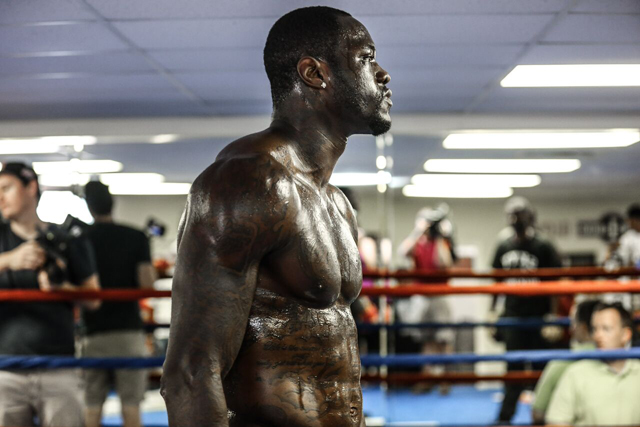 Deontay Wilder teases the possibility of moving down to cruiserweight, and Errol Spence says he wants the Danny Garcia vs. Shawn Porter winner

Picture the damage Deontay Wilder – he of 39 knockouts from 40 pro wins – does to heavyweights, and now imagine him fighting men weighing sub-200lbs. Yeah, you heard it right. Picture Deontay Wilder, the reigning WBC heavyweight champion, competing as a cruiserweight.

Because once his heavyweight goal is over and he has taken the WBA, IBF and WBO titles from Anthony Joshua this year or next, Wilder, it seems, wants to make a bit of history.

Speaking to his fans on Instagram, the American said: “You know, I’ve just been sitting in my car thinking. I’ve been thinking about, once I unify the heavyweight division, moving down to cruiserweight and taking over that division.

Of all the world’s heavyweights, it’s fair to say Wilder, as lean as he is, might be the one best suited to a drop down in weight. After all, he weighed a touch under 215 pounds for his most recent heavyweight title defence (against Luis Ortiz in March) and could, if he wished, presumably trim some more weight to get below 200.

But at what cost?

Wilder, a student of the game, won’t need to be reminded of the fate that awaited Roy Jones Jr in 2003, when, having climbed to heavyweight to rip the WBA title from John Ruiz, he then attempted to get back down to light-heavyweight and fight Antonio Tarver in defence of his light-heavyweight belts. Stripped of muscle, speed and durability, Jones struggled badly – uncharacteristically so – in the pair’s first fight and was then brutally knocked out in the rematch six months later.

What’s more, Chris Byrd, the former IBF heavyweight champion, a little man accustomed to fighting bigger men, decided to drop down to light-heavyweight in 2008 (cutting 37 pounds from his last fight), only to find himself out of sorts, well off the pace and eventually stopped by Shaun George in nine rounds. Alas, switching weight classes didn’t work out for him, either.

Wilder has been warned: to make history, you first need to be aware of history.

The only thing more impressive than Callum Johnson’s stunning 91-second demolition of Frank Buglioni in March is his willingness to fight IBF light-heavyweight champion Artur Beterbiev in his very next bout.

Johnson, the victim of a slow-burning career, and seemingly keen to get a move on, has shown no aversion to agreeing to the Beterbiev fight, one many others would turn down.

“These opportunities don’t come around every day and, when my promoter Eddie Hearn showed me the letter from the IBF offering the fight, I jumped at it,” he told Sky Sports.

“I’m in the game to be in the biggest and best fights possible. I’ve dreamed of winning a world title since I was a kid so I’m not going to turn down this chance because he is this apparent beast. I believe I am a beast as well and can beat him.”

Johnson was indeed beast-like in his dismantling of Buglioni, hurting him early and then finishing him soon after, yet Beterbiev has, in accumulating a 12-0 (12) record, shown a whole different level of beastliness. The 33-year-old has fought just once since 2016, which does nobody any good, but that one fight, a twelfth-round knockout of Enrico Koelling to grab the vacant IBF title, was a less-than-subtle reminder of his destructive qualities. Frankly, the Russian, an apologetic seek-and-destroy merchant, hits as hard as anybody in the 175-pound division.

Thirty-two-year-old Johnson, though, has stopped 12 of 17 beaten opponents and is blessed with some power of his own. It’s why, in fact, he’s running towards an opportunity most other light-heavyweights would run away from and backing himself in potential fights against the best in the division, eager to discover the extent of his own potential.

Good for you, Callum.

Errol Spence isn’t exactly looking past his next opponent, Carlos Ocampo, but he’s good enough to get away with occasionally peeking at his fight calendar and lightly sketching in future appointments.

For example, Spence, the IBF welterweight champion, is already thinking ahead to a unification fight against either Danny Garcia or Shawn Porter, the two welterweights who contest the WBC crown on August 25.

“Whoever wins the fight between Danny Garcia and Shawn Porter for the WBC title will have to fight me,” he said. “I’m ready to unify. I’m ready to take the belt from either one of those guys.”

Spence’s IBF title defence against Ocampo goes down at The Ford Center at The Star in Frisco on June 16. It’s a fight, despite Ocampo’s 22-fight unbeaten record, he should win.

“It feels good to be fighting back at home in Dallas,” said Spence, 23-0 (20). “This is where I started and where my core fan base is. It’s great to fight in front of my people and even better that I can do it as a world champion now.

“We’re working hard on our game plan and sharpening our skills in camp to make sure I’m the best version of myself when I step into the ring against Ocampo.

“I’m a versatile fighter who is able to switch it up. I can box from the outside but also go on the inside. These are things that we’re always working on in the gym. Our opponent may bring something different than we expected into the ring, so we work on having a plan for everything.

“I’ve been putting this division on notice for a while. June 16 is another day that we’re going to give another one-sided performance and dominate. I’ve had the welterweight division on notice since my first fight. They know I’m here.”

He hasn’t been ‘here’ for long – certainly not as long as Garcia and Porter – but already Errol Spence has made his presence known.

And finally… it took him a while but Sylvester Stallone has now formed Balboa Productions!

The new company is, of course, named after one of Stallone’s best-known creations, the boxer Rocky Balboa, and has been formed in association with Braden Aftergood, an executive producer of Hell or High Water (2016).

Even better news: Stallone’s first project under the Balboa Productions banner is fight-related and will please all disciples of Rocky.

“Balboa comes with a project already in development and it’s not far from the Stallone wheelhouse: a biopic on Jack Johnson, the first African-American heavyweight champion,” The Hollywood Reporter said.