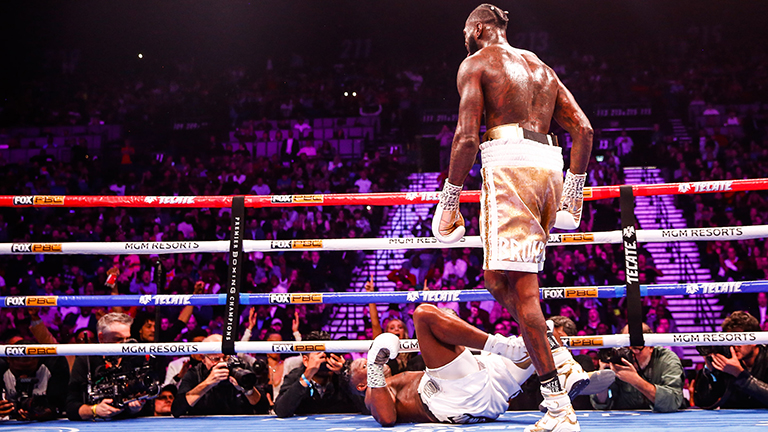 Deontay Wilder reckons he would do irreparable damage in four-ounce gloves, and Joseph Parker would want the lion's share against Oleksandr Usyk

The only difference this time is that it’s not boxers Wilder is discussing harming but instead mixed martial artists, fighters who typically compete wearing four-ounce gloves.

Though Wilder concedes he has no immediate plans to fight in MMA, he is seemingly receptive to the idea of one day experimenting in other combat sports and discovering the impact his undoubted power would have elsewhere.

“I only have six years (before he wants to retire) and theoretically speaking anything can happen in that timeframe,” Wilder told ThaBoxingVoice.

“I’ve spoke out about that before (fighting in MMA). Of course, for me, I’ll fight you in my sport and I’ll come to your sport and do it too.

“I feel in MMA they allow you to get on top of your opponent and bash his face in with velocity and speed coming downwards. Four-ounce gloves. I already talk about getting people out of the ring, but that would definitely be the sport where I show it, man.

“It’s just different rules, different things. I’m built with a set of skills. I have a lot of intellect and a lot of knowledge of combat, period.

“I see all the MMA guys always come to boxing because in boxing you have to stand on your feet. You have to be a motherf***ing man for 36 minutes.

“But I wouldn’t mind going into his world as well too. One for one. May the best man win.

“But you know, all this is fantasy talk. I don’t think anything will ever come to fruition. I’m just too dangerous of a man in any type of combat sports.

“I really would end a life because I have the power to, and that’s just the damn truth.”

Although Wilder, 34, is arguably the hardest puncher in boxing right now, the differences between boxing and mixed martial arts, of which there are plenty, have been highlighted in prior fights between men happy to crisscross. Think James Toney and Randy Couture. Think Conor McGregor and Floyd Mayweather. We know that while there is money to be made most sensible fighters will stick to what they do best.

A lot has been said by and about New Zealand promoter David Higgins in the last couple of years, but never can it be said he doesn’t bat for his fighter.

The man who rose to prominence in 2018 alongside former WBO heavyweight champion Joseph Parker has always believed in his fighters, always championed them, and often been willing to cast himself as the fall guy to take the attention away from those who would prefer to do their talking with their fists.

He is at it again today, this time claiming Parker, defeated twice in his last four fights, would be the A-side if a WBO heavyweight title fight against Oleksandr Usyk gets made in the first quarter of this year. And though there is presumably method to his madness, this is nevertheless a comment that will have plenty scratching their heads given Usyk’s extraordinary achievements as a cruiserweight.

“Usyk has not earned his stripes at heavyweight,” Higgins told Sky Sports. “Joseph Parker is the A-side. Joseph Parker has sold out the Principality Stadium with Joshua and he’s sold out The O2 with Whyte.

“He’s the A-side, so if Usyk wants to share the ring with Parker, I would be expecting a 70-30 open book revenue share in Parker’s favour. I’ll get ridiculed for that but, listen, Parker has beaten Andy Ruiz, he’s sold out the Principality and the O2 and he’s a big name in the UK, so Usyk is the B-side.

“Absolutely Joe would fight him. As long as the Usyk team recognise and understand that they are the B-side, there’s no problem.”

As well as driving a hard bargain, Higgins is also a man who possesses an unwavering belief in his fighters. This will be tested again should Parker fight Usyk, of course, but for now Higgins shows no signs of doubting his man.

“There’s a saying that styles make fights,” he said. “I think Joseph Parker has a better chance against Usyk than, say, Anthony Joshua. I think Usyk would dissect Anthony Joshua, (who is) too big and slow, whereas Parker is quick. We haven’t seen the best of Joseph yet.

“It’s a very good fight and we really respect their team, but we are the A-side, and as long as they are willing to accept a small percentage of the revenue, then there might be a deal.”