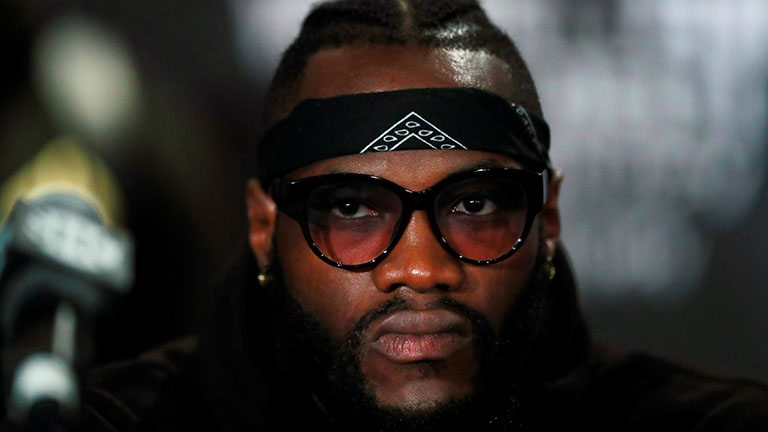 WBC heavyweight champion Deontay Wilder is having to wait to get his hands on Tyson Fury a second time but that doesn’t mean he has forgotten about him. In fact, he seems to be keeping track of his every move.

Back in December, the Alabama puncher dropped Fury twice in a drawn fight and has since defeated Dominic Breazeale inside a round. On November 23, he fights Cuban Luis Ortiz in a rematch, after which he is expected to finally settle the issue with Fury – scheduled, barring any unforeseen hurdles, for February 22 in America.

In the meantime, Fury watches Wilder and Wilder watches Fury.

“I saw him in the WWE,” Wilder told Declan Taylor of The Independent. “I thought it was hilarious and I liked how the other wrestler told him he was going to be left on his back looking up at the lights just like Deontay Wilder did him.

“He talks about this lineal stuff but that don’t mean nothing. I ain’t ever seen a 12-round fight with no title, no belt. You say you’re the champ but it’s an invisible belt, we can’t see nothing.

“But the heavyweight division is so amazing right now, so exciting and I’m so happy to put my little percentage in and make it so great. I remember the time when it was in a dark tunnel. There was nothing exciting going on. It was kind of boring. Now it’s just amazing and I’m happy to be part of that.”

Wilder is right to suggest the so-called lineal heavyweight title only carries relevance when it is used to sell otherwise routine and meaningless heavyweight fights. It worked with Tom Schwarz in June, and it worked with Otto Wallin in September. But when the time comes for Wilder and Fury to finally reconnect there will only be one belt visible, one belt advertised and one belt on the line.

The hope, too, is that there will be just one champion left at the bout’s conclusion.

Retired multi-weight world champion Floyd Mayweather was recently in Hong Kong to discuss an exhibition boxing match in China but had second thoughts during the negotiations, reports Jack Figg of The Sun.

He has since turned his attentions to a rematch with Manny Pacquiao and that noise you hear is the boxing fraternity collectively sighing. Yes, here we go again, I’m afraid.

Speaking to The Sun, Hong Kong’s DEF Promotions director Jay Lau explained: “Mayweather came two times to Hong Kong, he spoke with my son Jayson and we had communications but now he is focusing (on) the Pacquiao rematch.

“We were talking about an exhibition in China, a big event but not a recorded professional boxing fight. Something like Mayweather vs. Tenshin (Nasukawa) in Japan.

“We spoke a bit about doing a special fight in China, but halfway through he turned to the Pacquiao rematch, so we stopped.”

If only now talk of Mayweather vs. Pacquiao II could be stopped. Then we’d be getting somewhere. Then we could all move on.