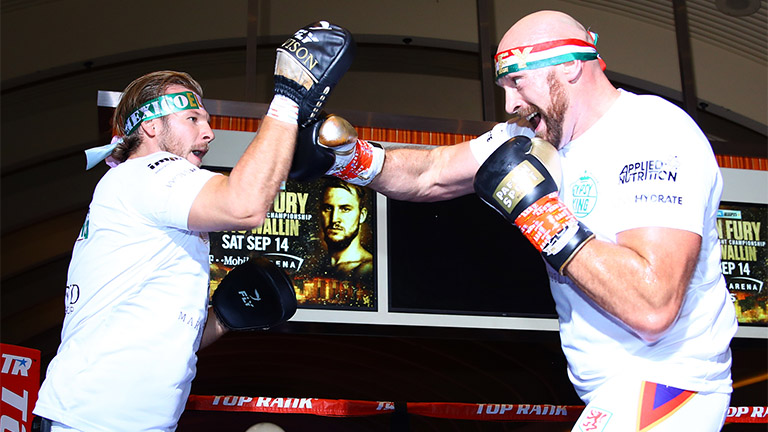 Deontay Wilder questions whether Tyson Fury's new training team will add anything new to his game, and Amanda Serrano is chasing Katie Taylor

WBC heavyweight champion Deontay Wilder believes the only game plan Tyson Fury, his next opponent, is constructing right now is one to use after their February 22 fight as opposed to during it.

The Alabama puncher fears Fury’s decision to part from trainer Ben Davison, in particular, is something that could later be attributed as a reason why Fury doesn’t perform on February 22 the way he did when he and Wilder met for the first time in December 2018.

“A lot of stuff that he’s doing is making me feel like he’s setting up an excuse for when he loses,” Wilder told ThaBoxingVoice. “The weight thing – I don’t want to hear nothing about being out of shape or, ‘He didn’t have enough time to get in shape.’ All these trainers around – I don’t want to hear when I knock him out that, ‘If he had Ben it would’ve been better.’

“I don’t want to hear no excuses. I already feel like all this stuff that’s going on is going to be bent around as excuses.”

The shrewdness of Fury’s choice to work with Sugar Hill and Andy Lee, old friends from his brief time spent training at Detroit’s Kronk gym, will of course rest on his performance later this month.

Yet Wilder, still with Jay Deas and Mark Breland after all these years, doesn’t see Fury sprucing up his corner team as any great reason to be concerned.

“I don’t,” he said. “It’s similar to the Dominic Breazeale camp when they added Virgil (Hunter). When you have bad habits, it’s hard to correct. Sometimes it takes years to correct bad habits. And it takes even longer when you ain’t used to that, when you ain’t worked with that person.”

Hill and Lee would be the first to admit they haven’t had a lot of time to work with Fury ahead of his crunch clash with Wilder later this month. However, with styles like Fury’s and Wilder’s, it’s hard to imagine there is anybody on the planet capable of correcting bad habits, smoothing their rough edges, or altering any of the stylistic elements that happen to make both heavyweights so unique and hard to beat.

And, frankly, why would anybody want to?

Amanda Serrano, the current WBO women’s featherweight champion, says it is inevitable that she boxes Katie Taylor, the WBO female super-lightweight champion, at some point this year and believes when they do she will show the world that Taylor is an “average woman”.

Serrano hasn’t lost a fight since 2012, while Taylor is undefeated so far in her 15-fight professional career. Both are considered two of the best pound-for-pound female fighters on the planet right now and both have something the other wants. More importantly, though, both know a fight between them will generate the kind of payday they will be unable to acquire elsewhere.

“I believe it will be one of the best,” Serrano, 38-1-1 (28), told SiriusXM. “We have the seven-division world champion, I’m currently the featherweight champion, and then she’s the undisputed champion.

“Ever since she turned pro, everybody was putting us against each other. So, now is definitely the right time for us to go in there and fight each other to declare who is the best.”

In an interesting plot twist, Serrano’s sister, Cindy, suffered a defeat at the hands of Taylor back in October 2018. That was wide on points after 10 rounds, yet Amanda insists their coach, Jordan Maldonado, has seen little in Taylor to make them think the pride of Ireland will make it 2-0 against the Serranos.

“She has the gold medal from the Olympics, and she has a great promoter pushing her,” said Serrano, 31. “Everybody knows who she is because of Matchroom Boxing and putting her on DAZN.

“She’s an average woman. She’s a girl. My coach Jordan saw her in there with my sister when he was across the ring when my sister fought her. And you know, she’s average. There’s nothing really to her. She’s not no superhero like everyone paints her to be.”

If Serrano needs any further encouragement on this point, all she must do is locate the number of Delfine Persoon, the Belgian who pushed Taylor to the wire last June. Persoon, I’m sure, will go to great lengths to explain to Serrano exactly how ‘average’ she believes Taylor to be.