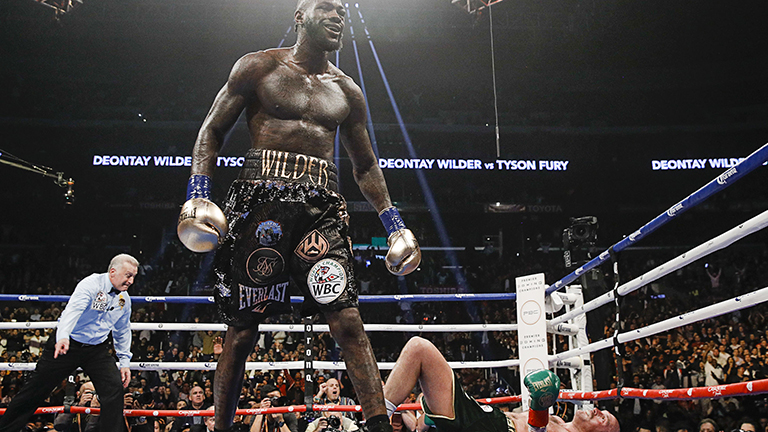 Deontay Wilder claims he broke his hand ahead of Tyson Fury fight, the WBC see no issue with the scoring of Saturday's bout, and Andre Ward could return

SUCH is the gruelling nature of training camp, it’s very rare that two fighters will enter a ring in 100% good health. But it’s a surprise nonetheless to hear Deontay Wilder come out today and say his performance against Tyson Fury on Saturday night (December 1) was likely hampered by a broken right hand he suffered 12 weeks before the start of training camp.

“Twelve weeks before the camp I broke my hand. I don’t make excuses. People don’t know these things,” Wilder, who salvaged a draw against Fury with two big knockdowns, told Sirius XM Boxing Radio. “Even in camp I barely ever threw my right hand; you can ask all my sparring partners.

“That could have been another reason why I was so off. I had all these sparring partners and most of the whole camp was nothing but jabs.

“I don’t make excuses. It was a great fight. You got the best of Tyson Fury and you only got the half-best of me.

“And I still did what I had to do. Imagine me with my full potential. That was all my fault; I blame myself.”

If you say what you see, Wilder’s right hand was clearly ineffective on Saturday night in Los Angeles and he missed many more than he landed throughout the 12 rounds he shared with Fury. Whether this was due to an injury, and a subsequent lack of timing, or the defensive savvy of Fury, though, is a debate that will now presumably run and run.

There’s only one way to settle it, I suppose: Wilder and Fury will, at some point, need to do it all over again.

However, if it is to be replayed it won’t be because the World Boxing Council (WBC) have ordered it.

Despite the controversy that followed Saturday’s draw, the WBC, in a statement released, appear quite happy with how the bout was officiated and scored.

“The heavyweight fight between Deontay Wilder and Tyson Fury resulted in a sensational and dramatic heavyweight match and the end result could not be more just with a draw by the three scoring judges,” said the statement.

“Even though the draw, or the difference between one judge to another, has created some negative comments in social media, the WBC is proud of both champion Wilder and challenger Fury, as well as the ring officials who worked this event.

“All three judges are honorable members of the boxing community with unquestionable integrity and honorability.

“Wilder and Fury fought like warriors inside the ring, but at the end gave everybody a lesson of humility. We are extremely proud for their behavior and sportsmanship.

“Boxing is a sport which is scored with objectivity. There are no goals, no runs, no baskets; it is the judges determination round by round to come up with the final score at the end of the fight.

“This fight had two knockdowns, which certainly made the difference which allowed Deontay Wilder to defend his title successfully.”

The message, from the WBC at least, seems clear: For anyone looking to petition the result of Saturday’s fight, you should probably stop now.

It’s been well over a year now since we last saw Andre Ward inside a boxing ring, but still the door remains open for a potential comeback.

Ward, 34, retired from the sport following a brilliant stoppage win over Sergey Kovalev in June 2017 and left with WBA, IBF and WBO world light-heavyweight titles and a 32 (16) record.

Since then, despite rumours of potential fights against Tony Bellew, Oleksandr Usyk and Callum Smith, the American has resisted the temptation to return.

At 34, he’s still young enough, and fresh enough, to go again, if that way inclined, and his long-term manager, James Prince, certainly isn’t ruling out the prospect of a Ward comeback.

“We had a lot of success. He left the ring a wealthy man and put ‘to be continued’,” Prince said on Sky Sports’ Ringside Toe 2 Toe podcast.

“You never know, there may be a ‘to be continued’ situation.

“Andre is a retired fighter right now. I believe that all things are possible. I’ll leave it at that.

“All things are possible, if the right situation is presented, is allowed, you never know.”

Prince’s comments are somehow both vague and revealing, but one thing seems clear enough where Andre Ward is concerned: if the fight is right, he’s happy to field an offer or two.