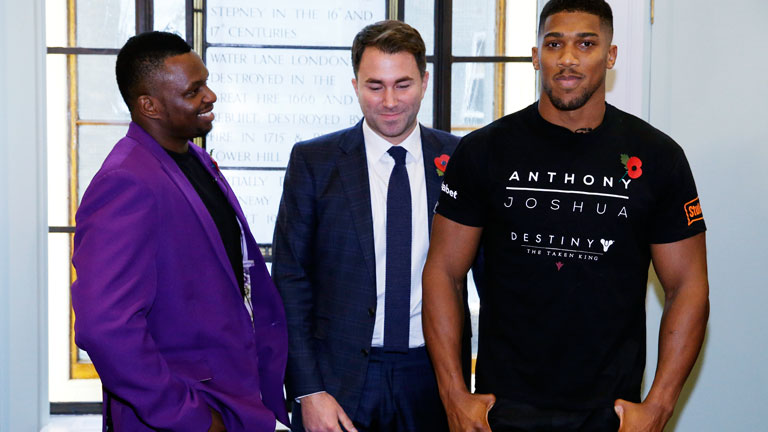 Although Joshua ultimately rebounded from that loss in fine style in December, winning back the titles he lost to Ruiz via decision, Whyte says the manner of the victory acted as proof that the former Olympic champion hasn’t quite shaken the demons of his first pro defeat.

“We’ve seen this before,” Whyte told Sky Sports. “Lennox Lewis was an aggressive fighter on the front foot but got knocked out by Hasim Rahman, then changed his style.

“People forget Wladimir Klitschko was one of the most aggressive heavyweights for a long time, but he got done by Ross Puritty, Corrie Sanders and Lamon Brewster then changed his style.

“Joshua will be the same. Tall heavyweights start their careers very aggressively, but then? Even Deontay Wilder, when he was clocked a couple of times by Luis Ortiz, thought, I’m just going to wait.

“We have seen this time and time again in history, and it’s always the same.”

The first time Joshua and Whyte met, back in December 2015, it was Whyte who had to pull himself off the canvas following a seventh-round knockout. Since then, however, he has strung together 11 straight wins and, aside from a bizarre battle with UK Anti-Doping which tarnished a July 2019 win against Oscar Rivas, done pretty much everything right.

Much improved, Whyte says a potential rematch against Joshua would be different to the first fight and is convinced Joshua’s weaknesses remain the same as they have always been.

“Let’s go further back,” he said. “Carlos Takam, Alexander Povetkin, Joseph Parker (all previous Joshua opponents). There were signs of caginess and not liking getting hit.”

“Him, (Deontay) Wilder, (Tyson) Fury, they all talk the same rubbish. He says one thing and then he backtracks and says another thing. At least I’m consistent with what I say, and I do what I say.”

With more lies told than titles available, the best approach to take when it comes to the heavyweight division is this: Listen to nobody and believe nobody.

Russia’s Alexander Besputin may have undone a lot of the good work he produced in a November 30 win against countryman Radzhab Butaev by producing an “abnormal” finding in a post-fight drug test.

Twenty-eight-year-old Besputin, the WBA regular welterweight champion, was notified of the issue by the Monaco Boxing Federation and, according to ESPN, who obtained a copy of the drug test report, the substance found was LGD-4033 (Ligandrol), something commonly used by body builders because of its ability to produce lean body mass while lowering body fat.

The Russian Boxing Federation has since said it has requested documentation on the test because it has started its own investigation, while Besputin, 14-0 (9), has told Russian news agency RIA Novosti he is “clean” and that “this substance could get in through food or supplements.”

Ultimately, though, unless there is some reasonable explanation, or a way out, Besputin’s decision win (116-112 on all cards) over Butaev in an ill-tempered fight in Monte Carlo will now be called into question. And Butaev, who angrily went after Besputin at the bell, reckons he saw it all coming.

“I am not surprised at all at hearing this news, and that’s why I was never respectful of him as an athlete or as a person,” he said in a statement.

“Ahead of the fight my team insisted on VADA testing while he and his team were denying it all along, and even after I agreed to pay for both sides, including his costs, he was very reluctant. After finally enrolling he attempted to ignore the requests from VADA for two weeks for his whereabouts to be tested.

“This is a disgrace and is disrespectful to the sport of boxing. All I have been wanting is a rematch since the final bell of the first fight.

“Now, with a level playing field, I’m even more confident in a victory.”

Unfortunately for Butaev, 12-1 (9), and indeed any other boxer naively hoping for one, there never has been and there never will be a level playing field. This is boxing. When they say there are “levels to it”, they don’t mean what you think they mean.