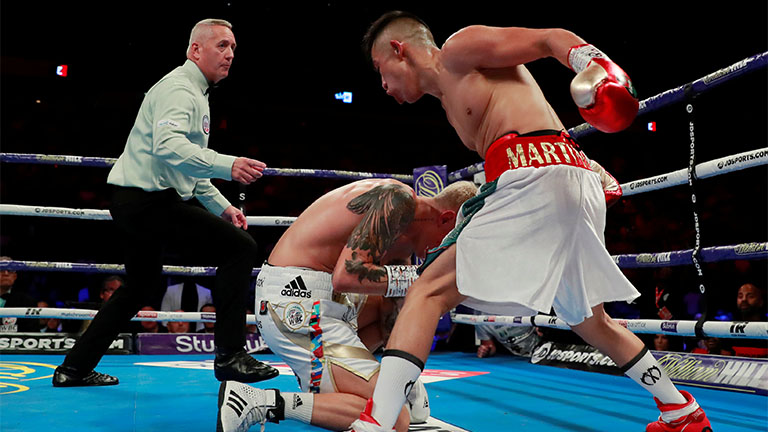 Julio Cesar Martinez and Rey Vargas both test positive for traces of clenbuterol, but the WBC say it's OK, and golden girl Nicola Adams signs off

DAYS after Saul ‘Canelo’ Alvarez ripped the WBO light-heavyweight title from Sergey Kovalev, we are reminded of that word again: the C-word, Clenbuterol.

This time it’s not Alvarez having to explain why the performance-enhancing drug was found in his system but Julio Cesar Martinez and Rey Vargas, two fellow Mexicans flagged for traces of the substance in recent tests with the Voluntary Anti-Doping Association (VADA).

“The amounts found in the tests are not sufficient to register any performance-enhancing benefit,” the WBC said.

“The muscle-forming drug is commonly found in many meat products throughout Mexico.

“Both Vargas and Martinez said that there was no conscious or deliberate intent to take Clenbuterol.

Martinez, 14-1 (11), was recently seen dropping and stopping WBC flyweight champion Charlie Edwards in the third round of a fight in London, England. His finishing punch, however, was ruled illegal by Mauricio Sulaiman, the president of the WBC, so the result, and referee’s decision, was subsequently overruled.

This meant the fight was considered a No Contest and ensured the WBC title remained with Edwards in Britain.

Vargas, meanwhile, is the long-reigning WBC super-featherweight champion. He defended his belt against Franklin Manzanilla in February and Tomoki Kameda in July, beating both on points.

This week Martinez and Vargas attended the WBC’s weekly press conference, which was held at the Rail Workers Union Headquarters, near Mexico City’s Monument of the Revolution, and say there was no deliberate intent to take clenbuterol, stressing the amounts found in their tests are not sufficient to register any performance-enhancing benefit.

Consequently, rather than being punished for traces of a PED, Vargas and Martinez have instead been cleared of any wrongdoing and have agreed to educational and nutritional advice. They have also said they will become Clean Boxing Program Ambassadors in their respective gyms.

At this rate it won’t be long before every leading boxing gym in the world has a CBP Ambassador, that is, a boxer whose name has been linked with the use of a PED, and whether this should be deemed a positive step or a sad indictment of the times is – like a failed drug test – open to debate.

Nicola Adams, the two-time Olympic champion and current WBO flyweight world champion, has announced her retirement from boxing at the age of 37.

Adams revealed that eye problems were the reason behind her cutting short her career in an open letter to her local newspaper, the Yorkshire Evening Post, but can be proud of all she achieved, both as a trailblazing amateur and title-winning pro.

In 2012, she became the first woman to win Olympic gold in her sport when taking flyweight title at the London Games. She then repeated the trick in Rio four years later, before turning professional with Frank Warren in April 2017.

She won the vacant WBO belt against Isabel Millan in 2018, just 18 months after going pro, then defended the title in a draw against Maria Salinas in September.

“I’m immensely honoured to have represented our country – to win double Olympic gold medals and then the WBO championship belt is a dream come true,” she wrote. “But it’s not without taking its toll on my body, and aside from the expected aches and pains, I’ve been advised that any further impact to my eye would most likely lead to irreparable damage and permanent vision loss.

“It has been an honour to compete on the global stage, and it has been a privilege to fight against such remarkable athletes. Whilst I am proud of my achievements, the unwavering belief from everyone in my corner, is something I will appreciate for the rest of my life.

“To my wonderful team, I would not be the fighter I am today without your encouragement and understanding – what you have taught me goes beyond the ring. Particularly special thanks go to the wonderful Alwyn Belcher, my coach and personal mentor of many years. Hanging up my gloves was always going to hard, but I have never felt luckier, and I’m so immensely proud of how far the sport has come.”

Frank Warren, Adams’ promoter, used his official website to add: “It was my absolute pleasure and privilege to promote the professional career of Nicola and it is just a pity that it has come to a conclusion.

“Nicola has that star quality in abundance that very few possess which will see her make a success of whatever she chooses to do. I am personally delighted that we guided Nicola to the winning of a world title and that she was able to realise that ambition in the professional ranks.

“Her accomplishments will go down in history and she will always be an icon of British sport. It is no secret that I, along with many others, once held reservations over the depth and marketability of women’s boxing in this country and it was Nicola who won us all over with her Olympic exploits, her unquestionable talent and huge personality.

“She will be much missed in the sport of boxing but will remain an inspiration to others for many generations to come.”

All at Boxing News wish Nicola Adams the best of luck with her future endeavours.