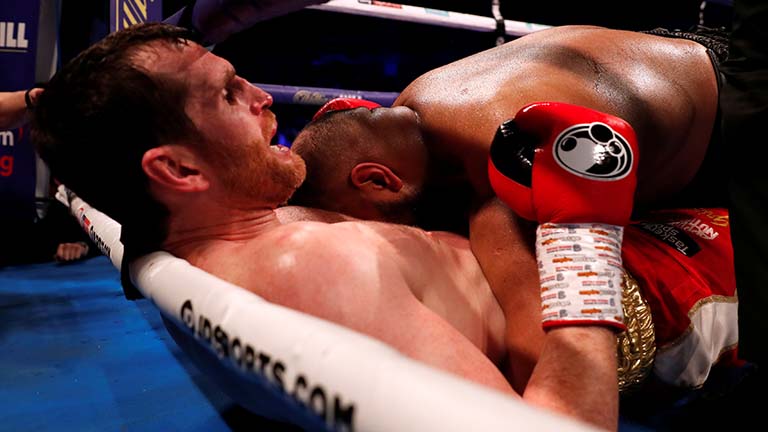 Dillian Whyte (or Oscar Rivas) could get their WBC world heavyweight title shot in May, and Kash Ali isn't giving up hope of boxing David Price again

THOUGH it has long been expected, we will, according to Eddie Hearn, soon have confirmation that Saturday’s intriguing heavyweight fight between Dillian Whyte and Oscar Rivas, two contenders on the cusp of striking gold, will be for a vacant WBC interim heavyweight title.

Hearn says a WBC announcement is due this week and, moreover, believes Whyte’s shot at the full WBC heavyweight title, currently in the home of Deontay Wilder, is by now well overdue.

“There will be an announcement this week with the WBC,” the promoter said. “This fight’s going to be for the ‘interim’ world championship and the winner will be the mandatory challenger with the WBC and effectively have to fight for the title before May 18.

“Basically, the winner of this fight will go on and progress and fight the winner of Wilder against (Tyson) Fury which looks set to take place early next year.”

Whyte has certainly been patient. In fact, since losing to Anthony Joshua in 2015, he has pieced together a run of nine straight wins, beaten the likes of Joseph Parker and Dereck Chisora, and improved his all-round game beyond all recognition.

That said, Whyte has also stalled this year, negotiated his way out of opportunities and become increasingly disillusioned with the sport.

“In life, you don’t always get what you deserve, or what you work for,” Whyte told Sky Sports.

“You can’t just be like, ‘Oh man.’ If I had that mindset, I wouldn’t be here. After losing to Joshua and all the ups and downs I’ve had in boxing, I would have jacked it in already.

“I’ve had so many reasons and excuses to jack it in – all the fights, all the struggle – but I just keep going. When one door closes, another opens.

“To be a top contender, to be a champion, these are all part of the make-up. It’s not, ‘I’ve got this great athleticism, I’m strong and fast.’ There are other things.

“We’ve seen many fighters who look the part, who are the part, but don’t make it because there’s other things like patience, resilience, stubbornness and obsession that are just not there.”

Until he reaches the Promised Land of a world title, Whyte will continue being tested in all these areas, and remain susceptible to defeat. Never is this truer than in the case of Saturday’s fight against Oscar Rivas, an undefeated Colombian with bowling ball shoulders and plenty of aggression. If that goes wrong, and it very well could, all Whyte has worked so hard to accumulate will ultimately count for nothing.

On the list of rematches the world doesn’t ever need to see again, nor ever want to see again, David Price vs. Kashi Ali II must be somewhere near the top.

Earlier this year a frustrated Ali rose to infamy when he was disqualified for biting Price in the fifth round of a messy, ugly heavyweight fight. Videos of the incident went viral, it was mentioned on mainstream news reports, and boxing was again brought into disrepute by one of its own. The British Boxing Board of Control banned Ali for six months, fined him £10,000, and it was thought Price and Ali, an unusual and testy combination from the outset, would never again have to share a room, let alone a ring.

Ali, though, has other ideas. With his ban soon to be up, the Birmingham heavyweight, despite what transpired in March, believes he can earn a rematch with Price if the giant Liverpudlian gets past Dave Allen this Saturday (July 20) in London.

“The truth is that nobody really knows. It was just starting to get interesting,” Ali told Sky Sports when asked about the first Price fight. “Apart from the bite it was give and take, a decent fight. He was starting to fade before the incident. With me, there is a question mark. People will wonder, ‘Is he better than that?’

“I will never get over it because I know it was wrong, but I have to move on. I can’t just sit back and be sad about it. It wasn’t a true reflection of me, what happened. From now on people will see the true me.

“I will definitely come back. I didn’t feel out of my depth. I know what to expect on the big stage and it can only improve me.

“I knew the fight would be difficult for three or four rounds. I had my best success in the fifth round before the incident. Price caught me with some good shots but then started fading.

“I would love to fight him again. It would be a massive rematch.”

Actually, it wouldn’t – at least not in terms of overall demand, magnitude or any sort of relevance. Yet, Ali is right in one respect: a Price vs. Ali rematch, given what preceded it, would make undeserved headlines, arouse the curiosity of a few, and be a hit on a UK pay-per-view card or if held in Jeddah, Saudi Arabia and shown on Channel 5.

Thankfully, David Price, unlike the fight’s potential audience, will presumably have enough class to take the moral high ground and say no.