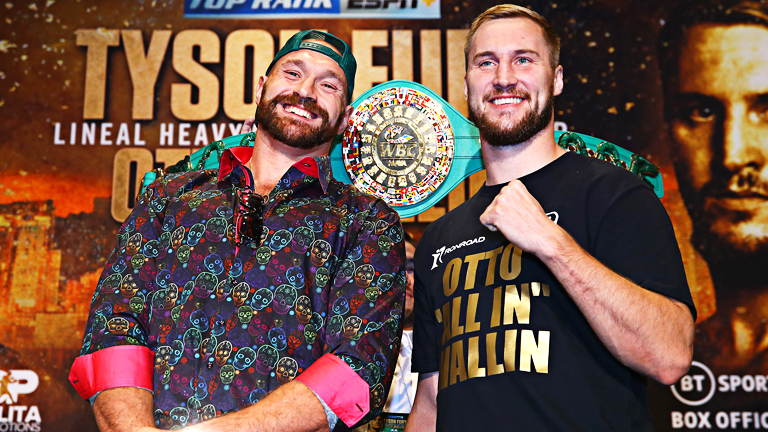 THE concern going into Tyson Fury’s WBC world heavyweight title challenge against Deontay Wilder on Saturday (February 22) was that the damage done to him by Otto Wallin in September would hamper his chances of dethroning Wilder.

Though Fury defeated Wallin, outscoring him over 12 rounds, he was badly marked up and cut in the process, which threatened the result against Wallin and even threatened to scupper the planned rematch with Wilder in February.

Thankfully, Fury was able to go through with the Wilder return. Better yet, the cuts of old remained closed and he was free to dominate Wilder before ending the fight in the seventh round.

The result both landed Fury the WBC heavyweight title and increased the stock of Wallin, who, in the end, proved to be a far stiffer test than Wilder.

“If anybody still doubted me, now they know,” said Wallin, 20-1 (13). “My fight with Fury was, of course, a much better fight and I showed that I belong as a top contender.

“I think Fury came in with a good game plan and showed he’s the number one heavyweight in the world. The trainer change he made worked out for him and the more aggressive style made Wilder look bad. Fury seemed to be on another level. Everything worked in his favour.

“I honestly think that my fight with Fury helped him get ready for this fight. He fought Wilder in a similar way to how he fought me in the second half of our fight.

“At the same time Wilder deserves respect for not wanting to quit. He kept fighting and showed a lot of heart, even though I think his corner should’ve stopped the fight earlier.”

“Neither Wladimir Klitschko nor Deontay Wilder, two of the greatest heavyweights of our time, could do to Tyson Fury what Otto Wallin did,” said Wallin’s promoter Dmitriy Salita. “Otto, at 29 years old, is only going to get better in every facet of the game. He is on his way to becoming a dominant force in the heavyweight division.”

The plan now is for Wallin to keep his name in the frame for a potential Fury rematch. True, it won’t rank high on the list of in-demand heavyweight fights this year, but once Fury has settled business with Wilder and, more importantly, met fellow Brit Anthony Joshua, there will be a gaggle of heavyweights queuing up for their shot at the title. Wallin will shout as loudly as any of them.

“Otto didn’t get lucky in that fight,” continued Dmitriy Salita. “He has the right style to always give Tyson Fury big problems. We’re going to keep him busy and winning while we wait for Fury to decide to settle this unfinished business with a rematch.”

“I want a rematch and this time I will finish what I started,” said Wallin.

Despite beating the American last weekend, it seems the short-term future of Tyson Fury remains in the hands of former WBC heavyweight champion Deontay Wilder.

Wilder, stopped in seven rounds by Fury, has the right to a rematch – what would be their third fight – but must activate a clause in their contract within 30 days for it to become a reality.

Admittedly, the pair’s second fight didn’t exactly lend itself to another, given its one-sided nature, but that’s not to say Wilder, still the hardest single shot puncher in world boxing, won’t give it another go.

If he does, it means we will have to wait a bit longer to see Anthony Joshua, owner of the WBA, IBF and WBO titles, unify the division against Fury. But this is boxing – patience is a collective strong suit.

“I prefer to go straight to Joshua, but that’s the contract,” Warren told the BBC. “If (Wilder) insists on the fight, we’re locked into it.

“It would be lucrative for him, but I have spoken to his manager and Deontay does believe he has the beating of Tyson, and he can knock him out.”

Joshua’s promoter, Eddie Hearn, has stressed his eagerness to make a fight between Fury and Joshua but is just as aware there are a number of stumbling blocks capable of preventing it. Fury has Wilder and Joshua, meanwhile, has mandatory obligations against both Kubrat Pulev (IBF) and Oleksandr Usyk (WBO).

“People don’t want the third fight (between Wilder and Fury),” Hearn said. “They’ve had 19 rounds now, Wilder’s probably won three of them and in the last fight he got battered.

“But I understand the contractual position. He does have a right to a rematch clause.

“We just hope they get on with it and get it out of the way.”

The same can be said for Joshua’s string of mandatory challengers and indeed any other fight that threatens to have Joshua vs. Fury going the way of Joshua vs. Wilder, the fight that never was.